Difference between revisions of "Flying Fish" 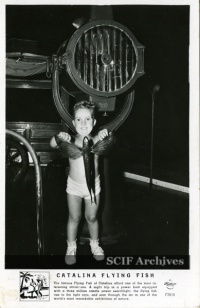 Flying fish are found in all ocean of the world, although they prefer tropical and subtropical waters of the Atlantic, Pacific and Indian oceans. Depending on the species, they are usually seven to twelve inches long. They can reach the height of 4 feet in the air, and glide distances of over 650 feet before returning back to the water. Flying allows for quick escape from predators: marlin, tuna, swordfish, mackerel and humans.

In the late 19th and first part of the 20th centuries, at Santa Catalina Island flying-fish tours were a popular evening boating attraction.

August 8, 1897 [NYT]: “Fishing in the Pacific. Venetian fishermen in California who spread their nets and get their catches at night. Fishes are tough and oily. Flying fish that are a menace to the boatmen… All about was heard the sound of splashes telling of flying fishes…’ Look out for your eyes’ cried the captain in broken English. ‘Sea bass are after the flying fishes. From the sound, the fish were passing through the air in every direction, the splash of their return being heard all around the boat. The men held their hats to their faces during the bombardment, and when it was over told singular stories of black eyes and damaged faces received from the impact with these night fliers…”

August 7, 1904 [LAT/SCat]: “Avalon. An immense school of flying fish was encountered as the Cabrillo came out of Avalon Bay at noon and hundreds of this strange fish were frightened into flight by the steamer.”

May 24, 1907 [LAT/SCat]: “Avalon. Yesterday afternoon the fisher folk got a thrill when an enormous school of flying fish emerged from the water at the mouth of the bay, resembling in the sunshine a great flock of white gulls. There were thousands of them and in their flight covered a space a quarter mile in extent. It was a vivid reminder of the exciting times when the tuna came in a few years ago. This flight was laid to the presence of white sea bass.”

May 23, 1916 [TI/Avalon]: “A flying fish weighing almost two pounds sailed into the social hall of the S. S. Hermosa Sunday as the vessel was crossing the channel. With a dull thud the fish struck the piano and then immediately became the center of admiration of many passengers who had never seen a flying fish as close quarters.”

June 13, 1916 [TI/Avalon]: “Spearing flying fish from the pleasure pier continues to be one of the amusements of the young Avalonite, albeit the number speared has been quite light of late.”