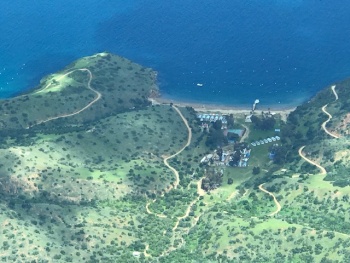 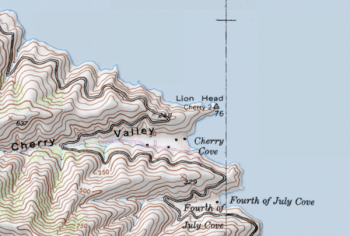 June 12, 1864 [DAC]: “Letter from Santa Catalina Island. June 3rd, 1864... The Fourth of July Valley, or rather, Glen Haven, as it has been recently named, in honor of that excellent lady, Mrs. Floyd Johnson, now a resident of the Isthmus, is half a mile westerly from the Isthmus. It is not more than two hundred feet wide, and terminates in a mountain ravine in less than half a mile from its pleasant little harbor. It contains eight dwelling houses, two tents, two workshops and several outdoor forges for sharpening picks. Its inhabitants number three ladies, thirty miners, no children. There is neither horse, cart, cow nor grog-shop in Glen Haven, but its mineral wealth can scarcely be estimated...”