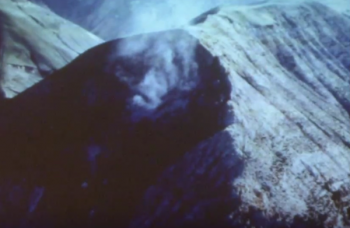 Fumarole (solfatara, fire-well) is a hole or vent from which fumes and vapors are emitted from the earth. They are usually found in volcanic areas.

Fumaroles have been active in the recent past on Santa Cruz Island in the vicinity of China Harbor. Smoke emitted from these surface vents has been reported many times to Coast Guard officials as a beginning fire.

» Ford, Henry Chapman Solfataras in the Vicinity of Santa Barbara in Bulletin of the Santa Barbara Society of Natural History 1:2, 53-56, 1890.

October 4, 1906 [LAT]: “A number of resident became excited yesterday over rumors that the Island of Santa Cruz, about thirty miles off the coast of Santa Barbara, was experiencing a volcanic eruption. Some persons claimed they could see smoke arising from the island, and that the depression of the island was assuming a change. On investigation it was found that the spectacle that alarmed the people was nothing more than the results of a well-defined mirage, which has been observed near the island and for several days past.”

August 29-September 14, 1948 [O. P. Pearson Field Notes]: “… Saw some sort of a fire on a steep north slope about five miles east of Prisoners’ Harbor. It seemed not to have spread two hours later. Radio people say there is a hot sulpher spring near the northeast coast… The fire I saw yesterday was what the ranch hands refer to as their ‘volcano’ — a fissure out of which steam or smoke escapes…”

August 27, 1956 [SBNP]: “Six county firemen were landed by two airplanes on Santa Cruz Island this morning to fight a brush fire on the southeast side of the island… Another fire is of more unusual character. A fire burning deep inside a mountain overlooking China Basin on the island was discovered in 1948 and according to geologists may burn for another 100 years.”