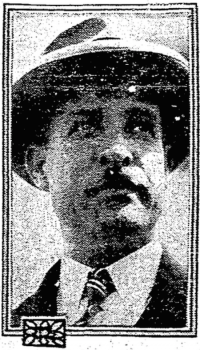 GALLEGOS RUBIO, Jose M. ( -1925) was "one of [the Mexican government’s] leading scientists" from the National Museum, Mexico City (San Diego Union, April 20, 1924). The April trip to the Coronado Islands was the first official trip with the San Diego Natural History Museum; however Prof. Gallegos had made trips with Mr. Huey prior to this. Gallegos died tragically of malaria the next year, while studying a locust plague in southern Mexico (San Diego Union Oct 2, 1925).

Records of many of Gallegos’ trips in association with the San Diego Natural History Museum are held in the SDNHM Library, in the form of L.M. Huey’s field notes and photographs. The Library also holds a copy of Prof. Gallegos’ report on trips to Sierra San Pedro Martir and Guadalupe Island with L.M. Huey in June and July 1923. The report is typewritten, in Spanish, and illustrated with Huey’s photographs, hand-annotated by Gallegos.

The highest mountain on Clarion Island, Revillagigedo Islands, is named Mount Gallegos in his honor. It rises to 100 feet in elevation.

October 2, 1925 [San Diego Union]: “Mexican biologist dies, martyr to his science. Stricken in plague district; Prof. Gallegos, friend of Zoo, well known here. A martyr to science, Prof. Jose M. Gallegos, one of Mexico's foremost scientists who spent several years here while carrying on biological investigation for his government, died recently at Payo Obispo [Chetumal on the east coast of the Yucatan Peninsula] where he had gone to study a locust plague devastating that part of southern Mexico. Prof. Gallegos went into the malaria-ridden region and while he was at work contracted malaria, which brought his death. News of the passing of the prominent scientist, who was known here for the great interest he took in the San Diego zoo and who was responsible for obtaining many unusual specimens, including the elephant seal, was received yesterday by Dr. Harry M. Wegeforth, with whom Prof. Gallegos worked in carrying on his biological investigations. Prof. Gallegos came here primarily to study biological resources of Lower California and made many trips to the little known islands off the Mexican coast as well as into the interior of Lower California. During his investigation, which occupied many months, he took a real interest in the San Diego zoo and cooperated with its efforts to obtain unique specimens from Mexico territory. He assisted in getting permission to bring the elephant seals from Guadalupe and was one of the party that made the trip to the island. One of the seals is now in the big pond at the zoo, the gift of the Mexican government. After his work here, Prof. Gallegos went back to Mexico City where he had been but a short time when the locust plague swept part of southern Mexico. Although knowing that the region was an unhealthy one, Prof. Gallegos volunteered to go south to study and report on the plague. During his stay here Prof. Gallegos made a host of friends, not only among scientists but among others as well. News of his death was received with surprise and sorrow. ”