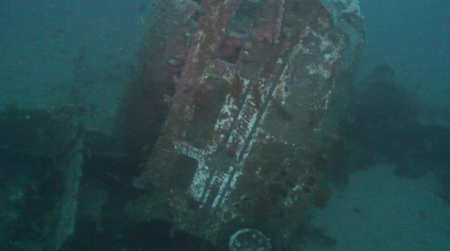 April 15, 1979 [LAT]: “1 Killed, 10 Hurt in Air Crash at Catalina. Eight in one family among passengers on plane that hits water at Avalon. A Catalina Airlines commuter plane crashed while attempting to land in Avalon Harbor Saturday, killing one person and injuring 10 others, eight of them members of one family. Three of the injured, including the pilot, Richard Lord, 43, of Long Beach, were hospitalized. The twin-engine Grumman Goose amphibian appeared to lose power while banking left toward Pebbly Beach landing ramp and its left pontoon hit the water, flipping it around, witnesses said. All but one of those aboard got off before the craft sank in about 100 feet of water. That one, an 81-year-old woman, "seemed to freeze" and went under with the wreckage, one passenger told The Times. That woman was identified as Ruth Gardner of Lomita. "I looked back at her as the plane was going down and she was just looking at the water," said George R. Putnam, who had sat next to the woman on the flight from San Pedro Saturday morning. Putnam, a Beverly Hills construction company executive, said he had helped her unstrap her seat belt after impact and "told her to grab a seat (floatation cushion) and jump out of the plane... The plane at that time was completely open, she could have just stepped over." Putnam said he turned his attention to two small girls and swam with the smaller of them to a nearby fishing boat. He returned for the other child but by that time "she was dogpaddling in the water." He helped her and several others into the boat. "I kept shouting,'get the old lady, get the old lady,'" he said. The plane sank in about five to ten minutes after hitting the water. Putnam and William Michaelis of La Crescenta, who was flying to the island for a days outing with his wife, four daughters and his parents, said the plane broke open on impact with the water. "I saw the nose go down and I became quite concerned about my wife who was sitting up front with the pilot," Michaelis said. He started to make his way to the front of the plane "when I saw the pilot's head pop up and then my wife." Michaelis' wife, Robin, 34, was hospitalized in Avalon Municipal Hospital with head and face lacerations. His father, Willard Michaelis, 63, of Chicago, suffered a broken arm and also was hospitalized there. Both were expected to be released today. Michaelis, his mother and four daughters were treated at the hospital for bruises and cuts, as was Putnam. Putnam said the flight has been "very pleasant" despite foggy conditions but ended in a violent shower of sheetmetal and debris when the craft plunged into the water. "From where I sat there wasn't any more ceiling, just open sky," he said. "The emergency escape windows went out and when they went, the roof came too. Pieces of sheetmetal hit me in the face and back." The plane "hit so hard my watch popped off my wrist," Putnam said, "and I was starting to put it back together when I thought, 'What in the hell am I doing?' I started unbuckling and helped her (the older woman next to him) and then I reached for the little girls because I could hear them crying." Putnam said there was "shock but no panic" among the passengers inside the plane,saying they had to get "untangled" from the metal and debris before they could get out of the craft. While helping to get the girls into a fishing boat, he said, he saw the pilot "hanging on the bow, completely dazed. I yelled at him, 'Are you all right?' but he just looked at me." The pilot was pulled aboard the boat. After examination at Avalon hospital, he was flown to Harbor General Hospital for treatment of abdominal and chest injuries, then transferred in stable condition to Kaiser Hospital, Bellflower. Also in the water near the fishing boat was Robin Michaelis, bleeding profusely from head wounds. She was also pulled aboard. Michaelis said after the impact "everybody was scurrying to release the seat belts. He had his youngest daughter, Korrie, 2, on his lap and the elder Michaelis was holding another daughter, Kate,5. The three oldest girls, Kate, Kelly, 7, and Kimberley, 12, swam out to the boats in the harbor as did his mother, Tillie Michaelis, he said. "I'm very glad they knew how to swim," he said afterward. The elder Michaelis, now retired, and his wife had visited Santa Catalina years ago and wanted to revisit the island so the trip was planned as a one-day outing for the entire family. An Avalon Harbor Department employee, Frankie Machado, said he could hear the plane's engines and knew that it was in trouble. "You can tell," he said, "so we started for it." Two harbormaster craft were dispatched to pick up survivors. In June, 1977, the Federal Aviation Administration ordered Catalina Airlines' Grumman Goose amphibians grounded when inspectors said they discovered three of the planes "unairworthy." The suspension was lifted after repairs were made. During the suspension, the airline was able to continue service between the island and Los Angeles Harbor and Long Beach Airport using large Sikorsky helicopters. Last summer, one of the airline's copters crashed in San Pedro Bay with three persons aboard, one of whom died later of injuries. The cause of Saturday's crash was not determined and The Times was unable to reach a spokesman for the airline for comment.”