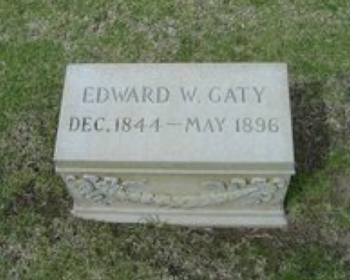 GATY, Edward W. (1844-1896), native of St. Louis, Missouri, Gaty moved to Santa Barbara in 1888 with his wife, son and daughter. He became mayor of Santa Barbara in 1892 and served for two years. He was also a judge and political activist for the Democratic Party, and ex-proprietor of the Arlington Hotel. It was his ambition to increase Santa Barbara’s fame as a resort destination. One of his most memorable achievements was the construction of the Santa Barbara Amphibia at the 1894 California Midwinter International Exposition in Golden Gate Park, San Francisco.

September 3, 1888 [SBDI]: “The sloop Brisk took a party consisting of Charles Ligare, Ed Gaty, Charles Diver and Lawrence McDonough over to the islands this morning. They will be gone about ten days and will visit all of the islands.”

1890. The Great Register of the County of Santa Barbara lists E. W. Gaty’s occupation as “gentleman.”

June 1, 1891 [SBMP]: E. W. Gaty received a telegram yesterday announcing the death of his mother at St. Louis. Mrs. Gaty spent several months in Santa Barbara about a year ago.”

March 11, 1892 [LAT/SB]: “Ed W. Gaty left last evening for Gaviota overland, from where he will ship on the sloop Liberty for San Miguel Island. He will be gone four or five days.”

August 14, 1892 [SBMP]: “Two of the disconsolate but now happy young men of Santa Barbara tendered a reception at Unity Hall last evening to the San Miguel [Island] Wanderers who visited that No-Man’s-Land on a voyage of exploration and a large amount of sea sickness and other pleasures too numerous to mention. The toilettes, although not after the San Miguel Island style, were very pretty and as follows: …Miss Gaty in a most becoming gown of red crepe…”

September 5, 1893 [LAT/SB]: “One of the numerous concessions the Midwinter Fair Association has been asked to grant is the right for a company of enterprising Santa Barbara businessmen, Mayor Gaty and Mr. Rogers being interested in the company, to erect a building on the fair ground to contain grottos, aquariums and rookeries, where seals, sea otters, sea lions and sea tigers will sport in their native element…”

September 24, 1893 [LAT/SB]: “Mayor Gaty, on Saturday, showed the Times representative the plans for the Santa Barbara aquarium for the Midwinter Fair, and they disclose a very handsome building, 86 by 96 feet, and 32 feet high, finished in imitation ashlar stone work in concrete, with a very pleasing exterior. The large tank in the main part is L-shaped and will contain 40,000 gallons of sea water, allowing the marine monsters to sport in their native element. Behind the tank there are rookeries and grottos terraced like the haunts of the sea lions and sea tigers on the water-worn cliffs of the Channel Islands. There will be toilet rooms and a promenade opening off the second story, the building and its fitting up bringing the cost of the exhibit up to $20,000. Mayor Gaty went to San Francisco Saturday to select a site for the building, and work will be commenced at once. The expedition for the capture of the seals will start about the last of this month.”

October 7, 1893 [LAT/SB]: “Mayor Gaty is expected home from San Francisco Saturday, he having made all arrangements for the sea lion exhibit at the Midwinter Fair.”

October 9, 1893 [LAT/SB]: “Mayor Gaty returned from San Francisco Saturday. He reports that the Midwinter Fair promises to be a grand success. Mr. Gaty says that he was obliged to entirely alter the plans and outside appearance of the proposed Santa Barbara aquarium, because the plan as first drawn did not harmonize with the exterior architecture of the other buildings. He says he will have the 40,000 gallon tank lit with electric lights in heavy submerged glass…”

October 18, 1893 [LAT/SB]: “Mayor Gaty leaves today for San Francisco to superintend the erection of the Santa Barbara Aquarium at the Midwinter Fair.”

November 11, 1893 [LAT/SB]: “Messrs. Gaty and Rogers’s sea lion exhibit will be a good advertisement for this county, but it alone will not do…”

December 7, 1893 [LAT/SB]: “Although the County Commission is progressing very slowly in their collection of sufficient money to erect the Santa Barbara pyramid at the Midwinter Fair, the Amphibia building is erected by enterprising Mayor Gaty, Eugene Rogers and others is rapidly nearing completion. The gasoline schooner Hattie from San Pedro left Monday for San Miguel Island to capture some sea lions, tigers, giraffes and elephants for the marine menagerie. P. E. Law left with his camera, and will take pictures of the dangerous undertakings for the San Francisco Examiner.”

December 12, 1893 [LAT/SB]: “Mayor Gaty returned from San Francisco on the Santa Rosa Sunday evening, and reports the handsome building erected by the Santa Barbara Company, which proposed to exhibit amphibia, to be entirely completed. The plans have been slightly changed, and all who have seen the building, agree in saying that it is one of the handsomest small buildings on the grounds. The howling collection of sea lions which were brought over from the islands a few days ago is still anchored a short distance from the wharf. Messrs.. Gaty and Rogers are thinking of taking a Spanish band from this place to play string music for the delectation of sightseers. The Spaniards will be dressed in their picturesque national costumes, and will no doubt be an added attraction.”

December 15, 1893 [LAT/SB]: “Messrs.. Gaty and Rogers went up on the Santa Rosa Wednesday night to superintend the seals and sea lions which were sent up to the Amphibia exhibit on the same boat.”

January 7, 1894 [LAT/SB]: “Mayor Gaty’s Amphibia is to receive another reinforcement of seven seals that were brought over from the islands and landed at the wharf yesterday. They were shipped for San Francisco last night on the Corona. Unkind people have been heard to say that if visitors to San Francisco wish to view seals they have but to direct their glasses in the direction of the bay, and that the necessity of incurring this expense and trouble of transporting seals from Santa Barbara is therefore not apparent.”

March 15, 1894 [LAT/SB]: “The big [basking] shark. Some unhung scoundrel has lopped two or three inches off the extended fluke of the big shark’s tail now undergoing a pickling process preparatory to mounting. One hundred dollars is offered for information leading to the conviction of the wretch… The present idea is to exhibit the shark properly mounted in Mayor Gaty’s amphibia at the Fair…”

May 12, 1896 [SBMP]: “Hon. E. W. Gaty dead. One of Santa Barbara’s best citizens passes away. He was identified with all movements for the public good and leaves a lot of friends to mourn his loss. Honorable Edward W. Gaty, ex-mayor of this city, and senior proprietor of the Arlington Hotel, died at six o’clock last evening after a lingering illness… He was born in 1844 in St. Louis, Missouri… In 1888 with his wife, son and daughter he came to Santa Barbara and purchasing property here, soon became known as one of our solid citizens… In 1892 he attained the distinction of being elected Mayor…”

January 16, 1897 [LAT/SB]: “An island in litigation. The Superior Court was asked today to appoint a receiver for San Miguel Island; a suit was filed by the Santa Barbara County National Bank against Mary L. Gaty, administratrix of the estate of E. W. Gaty, deceased. Mr. Gaty had a half-interest in the island, and the bank holds several notes signed by the deceased man.”

June 22, 1901 [SBDI]: “Judge Day rendered a decision today in the action of Mary Gaty against W. G. Waters. Mrs. Gaty sued for a half-interest in San Miguel Island. The court decided that she was not entitled to any interest, as the conveyances made were to secure moneys advanced and not absolute conveyances.”