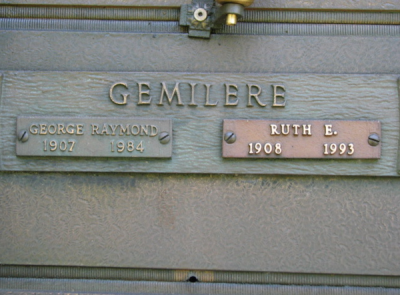 Children of Gemilere and Bledsoe: FIX. Bledsoe too old above~

November 18, 1931 [TI/Avalon]: “Word has been received of the death of Mrs. George Gemlere Jr., at the home of her parents, Mr. and Mrs. Watson, in Santa Barbara, on Saturday. Mrs. Jewel Gemilere was long a resident of Avalon during her girlhood days, and the many friends of the family and of the bereaved husband are indeed sorry to learn of her decease. She also leaves two young children.”

November 21, 1931 [TI/Avalon]: “Funeral services were held Tuesday for Mrs. Jewell Watson Gemilere, wife of Captain George Gemilere, Jr., who passed away after a minor operation in a Santa Barbara hospital. The internment was at Santa Barbara. Friends, relatives and the bereaved husband and children returned to Avalon Friday. That Mrs. Gemilere had endeared herself to the people of Avalon was evidenced by the many beautiful tributes that were sent to the funeral services. The many Avalon friends of the two families, the Gemileres and the Watsons, extend their heartfelt sympathy.”

July 27, 1932 [TI/Avalon]: “Captain George Gemilere of the Blanche W says there are more flying fish than other years.”

October 24, 1935 [RU/Avalon]: “Mrs. George Gemilere was hosting a surprise birthday party in honor of her husband's birthday Saturday night. Mrs. Gemilere's sister, Mrs. Lee Oma Freeze, and a daughter Beverly; also, Mrs. Inez Johnston and infant son, were weekend guests from Long Beach and helped with the arrangements. On a minor pretense George was lured from the house at 9 P.M. Mrs. Gemilere left the door open, and the guests filled the house, leaving the lights out. Fifteen minutes later, on returning home, the girls waited for George to turn on the lights, when everyone called 'Surprise and Happy Birthday.' The floor was covered with handsome wrapped packages, which turned out to be toys and booby prizes...”

November 26, 1936 [TI/Avalon]: “With hats off and bowed heads Avalon residents paid their last tribute to one of the most beloved citizens, your friend and my friend, George Gemilere. His sudden passing was a shock to his many friends. A man with a heart almost as large as his massive frame; very quiet, jovial, a good story-teller, and also a good listener. He was known as 'George' to the local community and to many summer visitors. We will all miss his ever present smile, kind and sympathetic way. He was a loyal employee of the Santa Catalina Island Company.”