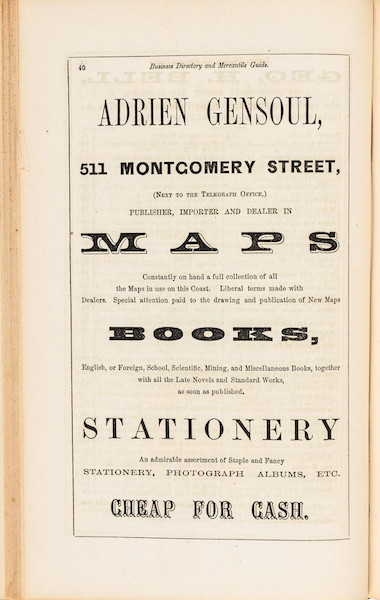 GENSOUL, Adrien Robert (1823-1877), emigrated from Paris, France to California on the Medicis in 1850 at the age of 27. Gensoul was a well-known San Francisco book dealer and importer of fine goods. He imported prints, photographs and art supplies, and was a frame manufacturer in San Francisco, active c. 1861- c. 1865.

Gensoul was an original investor in the Santa Cruz Island Company in 1869, along with along with nine others:

Adrien Gensoul died December 31, 1877. He was originally buried in Calvary Cemetery, San Francisco. When the remains of some 40,000 graves were removed and relocated, Gensoul is though to have been transferred to burial in a large unmarked mound in Holy Cross Catholic Cemetery, Colma, CA.

November 17, 1860 [DAC]: “We are indebted to Mr. Adrien Gensoul, 129 Montgomery Street, for a copy of a plaster medallion, just received from Paris. It was modeled from life by Crank, a pupil of the eminent David d'Angers...”

October 27, 1861 [DAC]: “Adrien Gensoul, book dealer at No. 511 Montgomery Street, has placed upon our table a splendidly executed lithograph, about eighteen by twenty inches in dimensions, entitled The Defenders of the Union...”

May 15, 1878 [OT]: “Probate notice. In the Probate Court of the County of Alameda, State of California, in the matter of the Estate of Adrien Gensoul, deceased. Order to show cause why petition to sell real estate should not be granted. It appearing to the Judge of said Court by the petition this day presented and filed by Marie Pauline Gensoul, Executrix of the Last Will and Testament of Adrien Gensoul, deceased, that it is necessary to sell some portion of the real estate to pay the allowance to the family, the debts outstanding against the deceased...”

April 11, 1879 [Oakland Tribune]: “Administrator's Sale of Real Estate. Notice is hereby gien that in pursuance of an order of the probate Court of the County of Alameda, State of California, made on the 31st day of March, A.D. 1879, in the matter of the estate of Adrien Gensoul, deceased, the undersigned, the executrix of the last will and testament of said deceased, will sell at private sale, to the highest bidder, for cash in gold coin of the United States, and subject to confirmation by said Probate Court, on or after Saturday the 19th day of April, A.D. 1879, all the right, title and interest that the said estate has by operation of law or otherwise... The following is the personal property to be sold under said order: Two—2— shares Santa Cruz Island Company's stock... ” [purchased by Justinian Caire]

June 23, 1881 [OT]: “West Oakland Items... Among the prominent residences are those of Mrs. Marie Gensoul, northeast corner of Ninth and Peralta...”