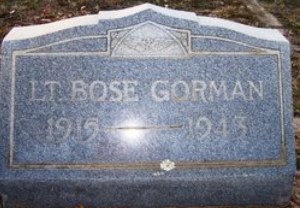 Gorman was graduated with the Class of 43-6 on May 1, 1943 from the Army Air Forces Navigation School at Selman FIeld, Monroe, Louisiana.

[? day] 1943, [Fort Worth Star?]: “Selman FIeld, Monroe, La — Aviation Cadet Bose Gorman, son of Mrs. Bose Gorman of Winnsboro, has completed his pre-flight School (Navigator) Selman Field, Monroe, La., and will begin his advanced navigation study at once at Selman FIeld, Monroe, La. After 15 weeks of intensive classroom work, flights in navigation training planes, military drill and calisthentics he will, if successful, graduate as a Second Lieutenant with wings and flying pay. With his octant, dividers, compasses, maps, and unpronounceable gadgets, the navigator is playing a most important position in the five, seven, or nine man teams manning modern bombers. His job is to get 'em there and get 'em back, over land, over water, through weather and rain, hail and fog—through anything. Cadet Gorman attended Texas A & M College, graduating in 1937. Before joining the armed forces he was employed by the Gulf Oil Corporation as Petroleum Engineer. Cadet Gorman entered the Advanced Navigation School at Monroe, Jan. 18th.”