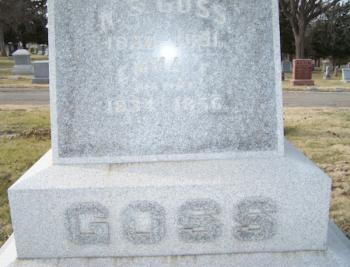 GOSS, Nathaniel Stickney (1826-1891), born in New Hampshire; colonel who was a founder of the Missouri-Kansas-Texas, or Katy, Railroad. He came from Wisconsin, Iowa, and other points east to Kansas in the 1850s and founded Neosho Falls in Woodson County, Kansas. His lifelong interest in birds led him to assemble one of the country's largest private collections of specimens.

March 13, 1891 [Iola Register]: “Col. N. S. Goss died at Neosho Falls on Tuesday of heart disease. He was a modest, manly gentleman and his death is a loss to Kansas. The monument he leaves is a magnificent collection of birds which he several years ago donated to the State [of Kansas].”

The news of the sudden death of Col. N. S. Goss, state ornithologist, was received everywhere in Kansas with profound regret. He was one of the best known men in the state, having come to the territory in 1857, locating at Neosho Falls. He was the first postmaster of Neosho Falls, which office he held from 1857 until the breaking out of the war. He was born in Lancaster, N. H., June 8, 1826, the youngest of four children--two sisters and a brother. His parents were of old Puritan stock. While N. S. Goss was yet in his teens his father lost his property and removed to Pewaukee, Wis. Thus, in a new country, and without ample means for a collegiate education, Mr. Goss began his life's work, with only a common district school and academy to assist him in his pursuit of the natural sciences. From childhood he had a deep love and admiration for birds and made them a study. He worked through the day and studied during the evenings; and at idle times during the day, even, whenever there was a lull for a few minutes, he was at his books.

He entered business for himself, and at the age of 28, married Miss Emma F. Brown, of Pewaukee, Wis. He moved to Waverly, Ia., with a view of entering into the banking business. While looking about him and making arrangements for the location of his business, his young wife was taken from him. Death had robbed him of his bride of only two years. Overcome by the loss of his beloved companion, the place no longer seemed like home to him, and in the spring of 1857, in a buggy, accompanied by a friend, he sought a home in Kansas, not knowing or caring where it might be. After following the Neosho river for some distance they selected the spot where Neosho Falls now stands as their new home. Only two or three families were along the river for miles. A town was laid off and Col. Goss became its first postmaster. In 1858 a grist mill was established and Col. Goss sold flour and meal to the Indians, receiving in return for the same Indian ponies, buffalo robes and some money.

He was elected and commissioned major in 1860, and lieutenant colonel in 1863 of the Sixteenth Kansas militia cavalry; was in active service during the "fourteen days' call" and the Price raid; and being familiar with the Indian territory, acted on several occasions as a scout for United States soldiers stationed at Humboldt.

He was appointed register of the land office at Humboldt in 1867 and in 1869 resigned to become land attorney for the Missouri, Kansas & Texas railway, with headquarters at Neosho Falls. It was through his exertions that the road built through the Neosho valley, and at a meeting of the stockholders of the road held at Emporia May 16, 1866, Col. GOSS was elected president. He was also land attorney for the Santa Fe at one time.

Established at "the Falls" once more he found ample time for his favorite study, and his collection of birds began to grow rapidly and attract attention throughout the state and abroad. He had made himself comfortable in this world's goods, and in 1881 donated his collection to the state without any remuneration, but upon the condition that it be known as the "Goss ornithological collection," and that he be the custodian during his lifetime. This offer was accepted and a room was set apart for it in the capitol building by the legislature and also one for his own use. In the fall of 1881 he took up his residence in Topeka.

He has made frequent trips to various localities in North and Central America, along the coasts and among the islands of the Gulf of California, among the everglades of Florida, along the northwest coast and the coast of Labrador, among the Rockies, the Sierra Nevadas, the great lakes and the rivers, searching almost every part of the continent for birds and giving to the state by his labors a collection of North American birds which rivals or exceeds any private collection in the union.

In 1883 he compiled and published a catalogue of the birds of Kansas, a neatly printed pamphlet of thirty-four pages, based upon observations in the field and knowledge gathered during a residence of over twenty-six years in Kansas. The catalogue embraced forty-nine families and 320 species and sub species. In 1886 he revised the catalogue, increasing the species to 335. In October, 1863, he was elected a member of the American Ornithological union, an organization established in New York, with a membership of fifty, and composed of the distinguished ornithologists of this country. This compliment was unsought and was even without his knowledge. The value of his collection has been estimated at $100,000 by competent judges.

Col. Goss never referred to the fact that only the American museum of natural history has a larger collection of birds, and that his is the largest collection of native birds in the United States. It is supposed to contain something like 1,000 species of birds. The Kansas ornithologist himself found and mounted 777 species and sub-species.

March 20, 1891 [Gove County Gazette]: “The funeral exercises over the remains of Col. N. S. Goss, state ornithologist, were held in the senate chamber at Topeka at 1 o'clock March 12. They were simple and not of a religious character. The friends of the deceased made short speeches, after which the remains were conveyed to the Topeka cemetery for interment. Col. Goss left an estate valued at $100,000.

Col. N. S. Goss, state ornithologist, dropped dead at Neosho Falls the other morning of heart disease. When the news was conveyed in the legislature at Topeka resolutions of respect were immediately passed and a recess taken. Col. Goss was 65 years old, and his collection of birds, which by his death becomes the property of the state, is one of the most valuable in the country. Its value is fully $100,000, and Col. Goss had devoted years to its accumulation.