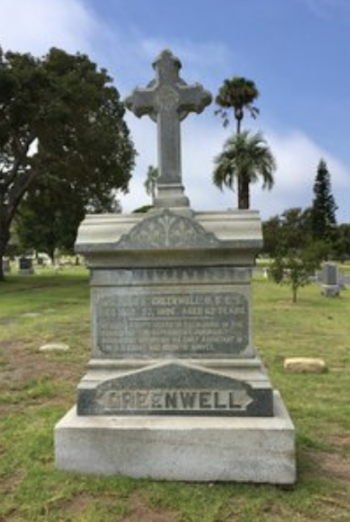 William E. Greenwell, U.S.G.S. died August 27, 1886 aged 62 years. He lived 30 years in California in the service of the government honorably discharging his duties as Chief Assistant in the U.S. Coast & Geodetic Survey.

August 16, 1857 [W. E. Greenwell to A. D. Bache]: “U. S. Schooner Humboldt, Prisoners Harbor, Dear Sir: In conformity with your instructions of June 16th, I forward you a summary report of work executed the past year…

September 27, 1860 [DAC]: “U.S. Coast Survey — We understand that Captain W. M. Johnson, who has been for some time employed on the topographical survey of Santa Cruz Island, in the Santa Barbara Channel, has been ordered to Half Moon Bay, near San Francisco, to complete a gap which had been left in the survey at that point. For this purpose he set out in his schooner to sail up the coast, but encountering a heavy gale, he was driven out to sea a long distance — over 200 miles. On Sunday last, he made the harbor of San Pedro, where the stores and instruments were landed, not much improved by contact with the sea, which at times broke over the little craft. The schooner has been brought up the creek to new San Pedro, where she will lie for the winter, the Captain going up by the steamer Senator. Captain Greenwell, of this department, has gone to Washington, expecting to return about March next; Mr. Bache, formerly operating with Captain Johnson, has also gone East, and expects to be located on the department there.”

1861. “Triangulation of the Santa Barbara Channel, Cal. Assistant W. E. Greenwell, after revisiting the Atlantic coast, returned to San Francisco in June, and at once reorganized his party for service in the schooner Humboldt. The vessel proceeded to the western end of Santa Cruz Island, where a signal was put up to be observed on from stations on the main shore of Santa Barbara Channel. Others were adjusted which had been previously erected on that island of Anacapa. These preliminaries were attended to under the disadvantage of prevailing fogs and gales of wind.” [U.S. Coast Survey Volume 6, 1861, p. 66]

July 24, 1872 [SBT]: “We are pleased to note among many tasteful improvements going on in our town, that Captain Greenwell is placing a second story to his fine residence, in addition to the new building adjoining he has just put up.”

September 20, 1880 [SBDP]: “The Coast Survey. Captain Forney has completed the survey of the islands and on Thursday evening returned to this place with his party. The work on Santa Barbara Island will be finished in about two weeks, and work will then be begun north of Point Conception working toward Port Harford. About 30 years ago Captain Greenwell made a survey of the islands, and Captain Forney reports that in doing is branch of the work he found and located by observation nearly every one of the marks and corners made by the former party. This speaks well for the accuracy of both surveys… Captain Greenwell will start for his new camp near Guadalupe tomorrow morning, and will be gone from the city about six weeks…”

May 20, 1882 [SBDP]: “The Los Angeles Times says: ‘Captain W. E. Greenwell of the Coast Survey, and his family, are in town, stopping at the Pico House. Captain Greenwell is identified with Los Angeles by his work as an officer, and is welcomed by the old residents as a friend.’”

September 9, 1882 [SBDP]: “Captain W. E. Greenwell will leave on the steamer tonight for San Francisco, en route to Washington. Since 1846, he has been a government officer on the United States Coast and Geodetic Survey, and has been stationed at various times in Maine, Massachusetts, Maryland, Florida, Mississippi, Alabama, Louisiana and Texas. For some years he has been a resident of Santa Barbara, and has always a first class reputation for honor, integrity and devotion to duty.”

September 15, 1882 [SBDP]: “The Post says: ‘Captain W. E. Greenwell, of the United States Survey Department, is at the Occidental Hotel on his way East, he having been assigned to duty on the Mississippi River improvement survey in Louisiana. This gentleman has been for many years attached to the Pacific Coast survey, principally in the south, and has made his home in Santa Barbara, where he is highly esteemed for his upright character and genial manners.”

September 15, 1882 [SBDP]: “Monday’s Call says: Captain W. E. Greenwell of the United States and Geodetic Survey is at the Occidental, and will leave for Washington tomorrow. Captain Greenwell has been stationed in California since 1855, making his home in Santa Barbara. Much of the work of the survey on the southern coast since that time has been done under his supervision. Although under orders to report to the Department at Washington, it is not probable that his sphere of duty will be changed.”

December 20, 1882 [SBDP]: “Captain W. E. Greenwell will return from Washington during the holidays.”

July 26, 1883 [SBDP]: “A report was concurrent upon the streets this morning that Captain W. E. Greenwell of the United States Coast Survey stationed at this point had been relieved from duty and had been directed to turn over to Captain S. Forney of the United States Coast Survey now at the Arlington in this city, all government property. A Press representative called upon Captain Greenwell with a view to ascertaining the truth of the report. Captain Greenwell denied emphatically that he had been relieved or removed, but acknowledged that he had been relieved from all further field service in the Coast Survey. The instruments belonging to the government, now in his possession, are to be turned over to Captain Forney who takes charge of field survey operations here. Captain Forney was not seen by the reporter, hence no statements of his were obtained. Captain Greenwell has been in the Coast Survey service of this coast for thirty years, and about twenty years of that time, at or near Santa Barbara. He has performed some very efficient service and stands very high in the estimation of the people of this city.”

August 22, 1883 [SBDI]: “Captain W. F. Greenwell of the U.S. Coast Survey today presented the editor of the Independent with copies of very interesting and elaborately finished maps of the coast lines and the neighboring islands between Point Conception and points southward…”

August 27, 1886 [SBDP]: “In the death at half past four o’clock this morning, at the family residence in this city of Captain William E. Greenwell, of edema of the lungs, Santa Barbara has lost another one of those venturesome, sterling pioneers who have been associated with the place from its advance from an almost unknown Spanish village to one of the most widely known health and pleasure resorts in the world, and the city pays respect to the memory of the deceased in the lowering of its flag to half-mast today. Captain Greenwell was a native of the state of Maryland, and while yet a young man, and about the year 1850, entered the United States Coast Survey service on this coast. During his first years of duty as Coast Surveyor he used as his transport ship, the schooner Humboldt, chartered by the government for this department of service and remembered by many old timers. This position was held continuously by Captain Greenwell until a few years ago when he resigned his commission…”

January 22, 1956 [LAT/SB]: “The Historical Society has opened a new exhibit on the Americano period in its museum in the Santa Barbara Mission… In part, the show attempts to depict the life of the early Californians. Mrs. Marjorie Greenwell Overbaugh has loaned mementoes of her father, Captain William E. Greenwell who made the first geodetic survey of the coast for the Navy…”