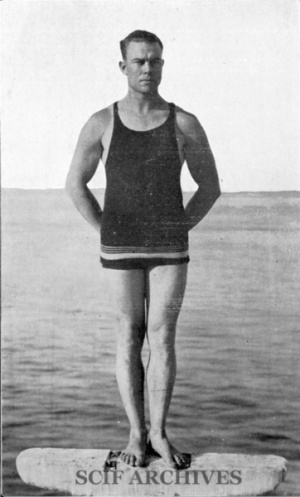 GRIFFITH, Oscar Earl (1895-1974) [SS#569-26-3043] arrived on Santa Catalina Island when he was 13 years old. He became a well-known coin-diver and was referred to as the ‘human seal.’ He served in the Army in World War I, and in 1920 married Ruth Moricich (1893-1975), one of a dozen children born to Avalon residents, Vincent and Josephine Moricich. In 1934 William Wrigley, Jr. chose Oscar Griffith to promote the island at the Chicago World’s Fair. During World War II, he fished for albacore and assisted boats in trouble. Oscar owned the Hurricane Cove Bar bar (where the bank building is now).

The Griffiths had one daughter:

Both Oscar and Ruth Griffith are buried in Avalon Municipal Cemetery.

September 14, 1939 [TI/Avalon]: “Mrs. Anna Miverva Griffith, aged 71, pased away at the holme of her son, Oscar Griffith on Maiden Lane, late Tuesday afternoon. Mrs. Griffith was born in California, and has resided in Avalon for the past thirteen years. Services were held at noon today (Thursday) in the Ivy Overholtzer

June 2, 1948 [LAT]: “The sea yesterday claimed the life of Harry (Harry the Monk) Boosinger, 48, the agile Santa Catalina Islander who for 32 years defied death in the ocean as a diver and a film stunt man. Only a diving mask and air hose surfaced before the horrified gaze of his wife, Minta Boosinger, off Lion’s Point, near the Isthmus, when his mooring craft crew hauled up the diving line in response to what they believed a signaling tug on the line. Then followed a frantic three-hour battle to reclaim Boosinger’s body from the ocean which he had defied so often that he was reputed to have a ‘charmed life’... An alarm to Avalon brought Warner, Oscar Griffith, a pioneer glass-bottom boat diver, and constable Tinch Moricich, whose brother Harry once had been rescued by Boosinger. Besides his widow, Boosinger leaves a brother, Leonard, of San Diego, and a sister, Mrs. Esther Roscoe of Los Angeles.”

December 25, 1948 [San Bernardino Sun]: “Job seekers rescued. Avalon, Santa Catalina Island, Dec. 24—Two bearded, storm-tossed young job-seekers, four days out of San Pedro by rowboat, were picked up 20 minutes off shore here today by Oscar Griffith of Avalon. They told Constable Lucas Moricich they were Terry Tracy, 22 and Zeke Bell, 19, and they had been living in an abandoned Navy landing craft at San Pedro. The officer bought them a hot meal, explained that their chances were nil because Catalina is a summer report, and began looking for a way to get them back to the mainland.”

October 3, 1954 [LAT]: “Little did they realize — the handful of Catalina Island glass-bottom boat and coin divers of 50 years ago—that they had originated a sport which one day would have thousands of participants prowling the waters off the Southern California coast from Palos Verdes to Laguna Beach—and off Catalina itself… A number of Duke’s coin and glass-bottom boat diving contemporaries still reside on the island. One is his brother, Frank, with whom he operates the glass-bottom boat Coral Queen. The others are Tinch Moricich, Oscar Griffith, Everett and Pete Adargo and Hernandez brothers, Sam, Marce, Andy and Manuel. However, none has dived for years. At least since the last of the glass-bottom boat diving exhibitions in the summer of 1941, prior to the outbreak of World War II. Of late years underwater exhibitions have been staged by Harold Warner and Al Hansen, aqua lung diving experts who put on a good show amid the fishes and submarine flora.”

January 1 1955 [San Bernardino Sun]: “Friends clear poach suspect. Avalon, Catalina Island — A jury of 12 peers—and friends—has decided that Oscar Griffith, 58-year-old man-about-Avalon, isn't a poacher. When a jury was impaneled Wednesday to try the fisherman and old-time Catalina resident on charges of poaching lobsters, Dep. Dist. Atty. Richard E. Maher couldn't find a prospective juror who didn't know the defendant. In fact, they all called him by his first name. When Oscar took over his own defense—there aren't any lawyers in Avalon—the jurors pitched in and helped cross-examine the fish and game warden who testified that he caught Oscar. Judge Ernest Windle, who recalls only six or seven jury trials in the 37-year history of Avalon Justice Court, said the three-hour trial turned into sort of a round-table discussion. The evidence was two lobsters Fish and Game Warden Jack Witwer said he saw Oscar poach in a closed area off Catalina Island. Their odor filled the room during the trial. After hearing all testimony—including Oscar's explanation that he was just in the closed area “to watch the goats come down to the shore at dusk,” the jury went out and deliberated five minutes. They decided Oscar was innocent. “Anybody got anything else to say?” asked Judge Windle. “Thanks, fellas,” said Oscar.”