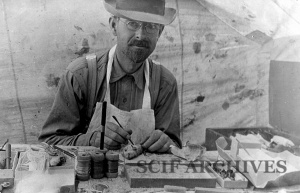 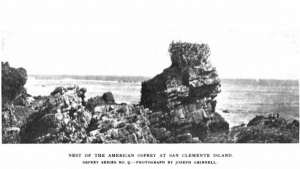 GRINNELL, Joseph (1877-1939), Oklahoma-born naturalist, field biologist and ornithologist who moved to southern California at age 7. After graduation from Pasadena High School in 1893, Grinnell enrolled in the college division of Throop Polytechnic Institute where he began his scientific training. In 1896, his studies were interrupted by an opportunity to go to Alaska, where Grinnell spent two years studying and collecting birds. Alaskan tourists and ornithologists, including Joseph Mailliard, visited Grinnell to view the bird skins. Upon his return to California, he finished his last year at Throop.

Grinnell sailed to Avalon, Santa Catalina Island from San Pedro on March 26, 1897. He stayed over night, and the following day, March 27, 1897 he sailed to San Clemente Island, where he spent the first night at Smugglers Cove. Grinnell then collected birds from March 28-April 3, 1897, until his return to San Pedro via Avalon, where he spent the night of April 3. On April 4, 1897 he returned to San Pedro.

May 11-June 9, 1897, with the support of the Pasadena Academy of Sciences, Grinnell participated in a three-week-long expedition to Santa Barbara, San Nicolas and San Clemente islands. On this trip Grinnell collected birds, eggs and lizards on Santa Barbara Island May 13-18, 1897 before transiting to San Nicolas Island where he collected both birds and lizards May 19-May 25, 1897. From San Nicolas Island, Grinnell returned briefly to Santa Barbara Island on May 27, 1897 and took the opportunity to collect two island night lizards. (These specimens were subsequently lost at the California Academy of Sciences during the April 18, 1906 San Francisco earthquake and fire.) From Santa Barbara Island Grinnell transited to San Clemente Island for where he collected specimens from May 28-June 5, 1897 before returning to the mainland.

Grinnell's work resulted in the first publication of the Pasadena Academy of Sciences. A set of bald eagle eggs he collected on San Clemente Island on April 1, 1897 is in the Museum of Vertebrate Zoology at U.C. Berkeley.

August 26, 1903 Grinnell sailed from San Pedro Harbor on a trip in which he visited Santa Catalina Island (August 26-27, 1903), Anacapa Island (August 29, 1903), and Santa Cruz Island (August 31-September 4, 1903), returning to San Pedro September 5. In addition to collecting birds on this trip, he also collected plants on Anacapa Island and at Fry’s Harbor on Santa Cruz Island. A Santa Cruz Island flicker he collected on September 2, 1903 is in the Museum of Vertebrate Zoology of the United States National Museum. Grinnell returned to Santa Catalina Island on November 24, 1904 and noted: “Birds in general, both residents and migrants, very much fewer than in December 1897.”

In 1905 Grinnell became editor of Condor, publication of the Cooper Ornithological Society, a post he retained for 33 years.

Grinnell married Hilda Wood (1883-1963) in 1906, and in 1908 they moved to Berkeley where Grinnell became director of the newly established University of California’s Museum of Vertebrate Zoology. In 1909 he donated all of his own collections to the museum. The Grinnells had four children:

Grinnell died in Berkeley, California on May 29, 1939 at age 62. During his career, Grinnell influenced dozens of future scientists and published more than 500 books and articles in the field of biology. He may be best known for his work on California mammals. Grinnell named the Santa Cruz Island vireo, Vireo maillairdorum “for Messrs. Joseph and John W. Mailliard, whose conscientious work with the western birds deserves at least this slight token of our recognition.” Nine birds, four mammals, and two insects area named for Ginnell.

Grinnell's island specimens are located in at least ten institutions:

April 2, 1897 [LAH]: “Avalon, April 1. E. B. Hoag, professor of biology in Throop University, accompanied by five students, has just returned from a week's visit to Clemente Island, where they went for the purpose of pleasure and research. Prof. Hoag made an interesting collection of rocks and minerals while Joseph Grinnell, the assistant curator of the museum, succeeded in securing some fine specimens of birds, including several new varieties. Some of the party returned to Clemente this morning on the Bertha, where they intend to search for Indian relics at the west end of the island.”

April 10, 1897 [LAT/P]: “The regular meeting of the Pasadena Academy of Sciences was one of more than usual interest. The subject of discussion was the trip to Catalina and San Clemente from which Professor Hoag and some Throop students have just returned… The birds of San Clemente were studied and trapped by Joe Grinnell, who read a very interesting paper on his observations…”

May 11, 1897 [LAT]: “The expedition under the auspices of the [Pasadena] Academy of Sciences will leave tomorrow (Tuesday) for scientific research on the Santa Barbara islands. A schooner has been chartered, and fully equipped. The party will consist of Joseph Grinnell, Horace Gaylord, Harry Galyord and James Britton. They will probably be joined later by Professor Hoag of Throop, and F. S. Daggett. The plan is to spend the first week on Santa Barbara Island, the second on San Nicolas, and about two weeks on San Clemente.”

June 5, 1897 [LAT/P]: “Some important scientific researches are being made by the expedition sent out three weeks ago to Santa Barbara, San Nicolas and San Clemente islands by the Pasadena Academy of Sciences. At the meeting of the Academy held this evening, Professor Hoag read a letter from Joseph Grinnell who is at the head of the expedition… About 300 birds, 200 mammals and several hundred insects have been collected. A large number of Indian skulls and skeletons have been exhumed, and many stone mortars, pestles and primitive trinkets and jewelry have been found…”

June 11, 1897 [LAT/P]: “Messrs. H. D. Gaylord, Joseph Grinnell, J. R. Britton and Horace Gaylord of the Pasadena Academy of Sciences expedition to the Santa Barbara islands, returned late last night, bringing back many interesting and valuable relics. They have been gone thirty days and their finds were so valuable that another expedition will be sent out within a few days. They set sail from San Pedro May 11 on a fishing schooner and visited San Nicolas and San Clemente islands, besides the Santa Barbara group, finding many evidences of former Indian occupation, especially on the first named islands. In the collection of insects, birds and mammals brought back are three species hitherto unknown to science. Such a great quantity of relics was secured that they could not bring them all, and they will be brought by the second expedition. A hermit was found living on San Clemente. Otherwise the islands are uninhabited.”

September 28, 1903 [LAT]: “Thirteen members of the Southern California Cooper Ornithological Club met on Saturday evening in at the home of Professor Joseph Grinnell of North Marengo Avenue… Grinnell, who recently visited the Channel Islands, told about the birds he found on Santa Cruz Island…”

July 25, 1917 [SBMP]: “Island birds described by U.C. Interesting bulletin tells of beauties of Santa Barbara archipelago. The races of birds which were marooned on the islands off the coast of southern California countless ages ago... are described in a monograph just issued by the Cooper Ornithological Club. It is written by A. Brazier Howell of Covina, and is the 12th in the series known as Pacific Coast Avifauna, edited by Professor Joseph Grinnell...”