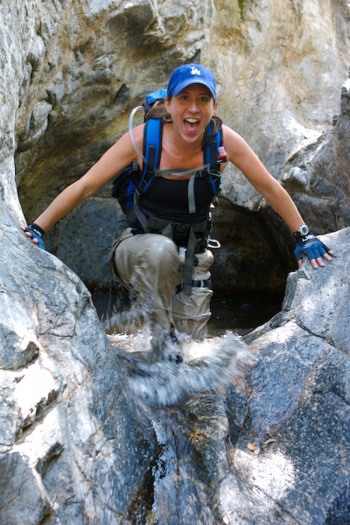 GUINEY, Marybeth (1968-2019 ), victim in the September 2, 2019 burning of the dive boat Conception at Santa Cruz Island. Marybeth Guiney and Chuck McIlvain were dive buddies who lived in the same Santa Monica apartment complex. McIlvain's wife and close friend of Marybeth's, Jasmine Lord, is a filmmaker who was working in Florida and unable to make this dive trip. .

Guiney was full of life and loved to travel the world with many of her trips centered around diving. She was a happy person who was “full of life” and a “wonderful friend who you could always count on,” said her friend of 10 years, Newsha Tarifard. “She traveled all over the globe and tried to bring diving to anyone she could,” Tarifard said. “She even looked into setting up a business to bring people to corners of the world that were difficult to get to for divers.” Jay Wilson, who was fond of hearing her travel stories while on local dive trips together, said Guiney was a fun person to be around. “She was a very interesting person,” he said. “Just living life to the very fullest.”

Marybeth Guiney was a National Marketing and Media Consultant. She was 51 years old.

September 4, 2019 [wcbv.com]: “CANTON, Mass. —A Massachusetts native was among the 34 people killed in a tragic boat fire that happened in waters off Southern California. Marybeth Guiney, who called Boston her hometown, was working as a sales director in Santa Monica. She was an ocean enthusiast who was dedicated to the protection of marine life and enjoyed scuba diving. “I overheard a friend talking about Marybeth and what a tragedy that was, and how she loved to dive, and I thought: ‘No, no, no, no, not my Marybeth,’” said friend Carrie Benabou. Heartbroken friends paid tribute to Guiney online, including the Malibu Divers dive shop. “She was the person you wanted to be around. She was fun -- the best smile, the best laugh,” Benabou said. Guiney was once an employee of the New England Patriots, who released the following statement: “The New England Patriots organization is deeply saddened to learn of the tragic death of Marybeth Guiney. We send our sincerest sympathies to her family and all who mourn Marybeth’s loss.” Officials have vowed to find what sparked the inferno aboard the dive boat Conception that happened in waters off Southern California, two days after it departed from a Santa Barbara dock early Saturday morning. The Conception was on the final day of a Labor Day weekend cruise when the fire erupted and a mayday call was made by the breathless captain overwhelmed by smoke. People and the Los Angeles Times reported two exits may have been blocked by fire. While initial details were limited, Santa Barbara County Sheriff Bill Brown said fire above deck blocked the one stairway and an emergency exit hatch where 33 passengers and one crew member were sleeping in their bunks. It's not known if any alarm sounded or what the people below deck may have done to try to escape. "If an emergency exit is blocked due to fire and prevents one from escaping, it's a horrific situation," said Hendrik Keijer, an investigator with Robson Forensic who has captained cruise ships and operated cargo boats. "Vessels are mazes." The five survivors were all crew members, including the captain. They apparently jumped from the bow, where the stairway led to the sleeping quarters, and swam to the stern, where they escaped in a dinghy and were taken aboard a nearby boat. Coast Guard records show fire safety violations on the Conception in 2014 and 2016 were quickly fixed. There were no deficiencies found in February or August 2018 inspections. Investigators will want to produce a timeline of the ship's final voyage. They will look at the ship's layout and whether the bunk room below deck was too cramped and had enough exits, review maintenance records and even study photos and videos from people who have been on the boat to look for valuable evidence.”

September 11, 2019 [People]: “For Marybeth Guiney, who lived Santa Monica, California, diving started off as a hobby but “turned into a passion,” Santa Monica attorney Perry Roshan-Zamir tells PEOPLE. “She was constantly thinking about her next diving trip. I remember we were sharing pictures one night sitting on board the boat out in the Solomon Islands, sharing stories. She was super excited about everything she’d seen down there underwater and wanted to share that.” Everything around her involved water, adds Roshan-Zamir. “All of her social connections and passions, in some form. She was definitely a water person — like a lot of us are — and I don’t mean that in a Zodiac way. She loved the ocean and wanted to do what she could to protect that environment,” he says. According to Roshan-Zamir, she had no commitments for the long weekend, so she said to her neighbor, and fellow victim, Charles Mcllvain, “Let’s go diving.” Guiney — a sales director, according to The Daily Breeze — once worked for The New England Patriots, which released a statement following her death, NBC News stations in Boston and Los Angeles reported. “The New England Patriots organization is deeply saddened to learn of the tragic death of Marybeth Guiney. We send our sincerest sympathies to her family and all who mourn Marybeth’s loss,” the team said.”