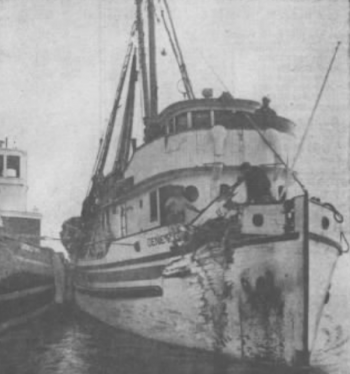 The crippled purse seiner, Genevieve H II, was convoyed to fish harbor yesterday by a tug after the craft's starboard bow had been smashed in a collision with the tanker, Idaho Falls, near the Los Angeles breakwater light in fog.
January 20, 1950 [Los Angeles Times]

March 30, 1944 [LBI]: “$13,000 Suit Filed in Ship Collision Case. It's usually male versus female or vice versa in superior court, not boats of opposite sexes. That, however, virtually tells the story of a $13,000 damage suit filed yesterday by the Sea Pride Packing Corp. against Genevieve Hugev, owner, and the first mate of the Genevieve H-II. Genevieve H-II and Johnny Boy, Sea Pride ship, collided off the coast of Santa Catalina January 16. The plaintiffs claim that the accident was caused by negligent operation of Genevieve H-II. Johnny Boy came off second best in the encounter, the fish company claims, and was laid up 10 days for repairs.”

January 20, 1950 [Wilmington Daily Press Journal]: “Fish Boats Rammed. A tanker smashed into the bow of a purse seiner in a collision yesterday in dense fog near the San Pedro breakwater lighthouse. No persons were injured. Visibility was 50 yards when the crash occurred between 2 and 2:30 p.m. The tanker Idaho Falls, out bound for San Francisco, slashed the 70-foot seiner Genevieve H-II from water line to bridge. The fishing boat's engine was flooded. The vessel was inbound with 20 tons of sardines. The Crowley Tug 9 towed it to Fish Harbor, Terminal Island. The tanker, undamaged, went on to sea.”

'January 13, 1950 [San Diego Union]: “Eleven crewmen aboard the Genevieve H abandoned ship at 4:20 p.m. yesterday after an engine room fire swept their vessel. Capt. Roy Hugev of San Pedro sent out a distress signal shortly before leaving the ship in a skiff. Coast Guard planes and surface craft were dispatched. A San Diego Coast Guard plane, piloted by Lt. William Wallace, located the crewmen 16 miles off Catalina Island. Wallace directed a surface vessel to the skiff. The crew was picked up and returned to San Pedro.”