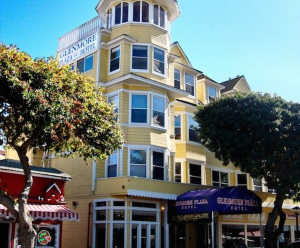 Glenmore Hotel, Santa Catalina Island is the oldest operating hotel in Avalon. This Victorian hotel opened for business in 1891 on Sumner Avenue. The hotel escaped the devastating 1915 Avalon fire. In 1917 the hotel was owned by E. J. Whitney. Hotel Glenmore listed at 115 Sumner Avenue in the 1924 Avalon Telephone Directory.

March 25, 1903 [The Wireless]: “The Glenmore Hotel is progressing, the framework being up for the third story. The fourth story will be a roof garden and sun-parlor, wherein warm weather guests may have unlimited fresh air and view, and in colder weather they make take refuge and find comfort in the sun-parlor, which will have the sunshine throughout the day.”

May 17, 1999 [LAT]: “Student dies after prom night fall. An 18-year-old high school student celebrating prom night fell from the rooftop of a Catalina Island hotel early Sunday and died hours later of massive head injuries, authorities said. David Ramirez Jr. and a fellow Avalon High School student were walking down the sloped roof to return to the inside of the Glenmore Hotel about 2:30 a.m. when Ramirez lost his balance and fell four stories, said Los Angeles County sheriff's Deputy Bruce Thomas. The students had gone to the roof to smoke, apparently accessing the roof by pushing themselves up from a balcony, Thomas said. Ramirez, 18, was airlifted to St. Mary Medical Center in Long Beach, where he died at 3 p.m., Thomas said.”

January 20, 2018 [The Log]: “Catalina’s Glenmore Plaza Hotel and the Hotel Boom of 1891. AVALON — Avalon, now a flourishing and luxurious vacation destination, has a competitive hotel market with a resort option for almost everyone, whether you’re looking for history, spa lodgings, or something with a bit of nightlife. With the many options guests have to visit hotels, it is hard to imagine a time when hotels were nonexistent and the most common way of staying on the island during the late 1800s was by tent. For about $7.50 a week, which translates roughly to around $187 today, guests could stay in a tent that provided beds, bedding, basic furnishings and limited cooking facilities. During the summer around 80 to 100 tents would be rented and that number continued to climb into the next century. By the late 1800s, the Victorians of the time were clamoring to travel to exotic and adventurous destinations, making Catalina Island a thriving vacation spot as early as 1891. As time went on, Catalina Island looked to expand its visitation and to provide lodging that fit all visitor’s means, from those who had a tighter pocket book to those who wanted a more extravagant and pricier excursion. This resulted in Catalina’s Hotel Boom where multiple hotels began popping up creating competition between vendors on the island. Constructed by the same crew that built the Hotel del Coronado in San Diego, Glenmore Plaza Hotel was built in 1891. It still stands on Summer Avenue, its original location. Over the years Glenmore Plaza Hotel has seen the likes of celebrities such as Charlie Chaplin, Clark Gable and Amelia Earhart stay there and it has even been rumored the hotel is haunted — if you believe in that kind of thing. In any event, Glenmore Plaza Hotel now holds bragging rights as the second oldest hotel built in California that is still operating and guests are welcome to book a stay to this day.”