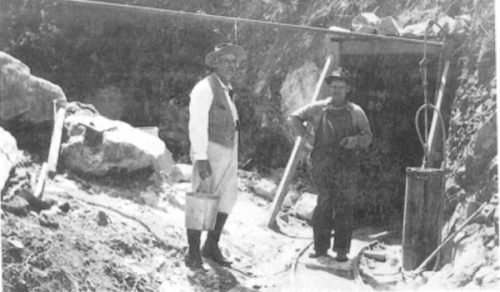 Captain George Calvert Yount (1794-1865), born in North Carolina, is said to have discovered an outcropping of gold-bearing quartz on Santa Catalina Island in Cherry Valley in the 1830s, twelve years prior to the 1850 California gold rush. He was an otter hunter who returned to the island many times until 1854. Samuel Prentiss was his friend and associate.

Before the Gold Rush in 1848, there were rumors that gold had been discovered on Catalina. A similar discovery on the mainland in the San Fernando area also pre-dated the gold rush. As the gold fields in the north came under prized ownership, enterprising individuals began to search for gold elsewhere. Catalina was one location drawing fortune-hunting miners. Although gold and silver were discovered on the Island, only small amounts were found in some island canyons, thus a Catalina Island gold boom never materialized.

Gold on Clemente — [Yount Manuscript, Bancroft Library]: “Gold on Clemente. On the east side of the Island of Clemente, at very low tide, in the year 1933, a little more than half way down the Island, was found a ledge of rocks projecting out into the sea, which was full of Gold—Doubtless the Island has since much washed away & the ledge must be quite under water except in extremely low tides; & it may be now quite submerged at all times—but still it is believed that it reaches back into the b which is rather abrupt—It is worth looking after* ...”

Yount's story of gold on the islands caused a stampede to Catalina in the early sixties. Yount himself is said to have gone out three times before 1855 to look for the "lost mine," which he never succeeded in finding.—J. M. Guinn, Ann. Publ. Southern Calif. Hist. Soc., vol. 9, 1912-13, pp. 43-48. (Also printed in Overland Monthly.)

"In 1863, Santa Catalina Island was the scene of a gold-mining boom which soon came to naught, and through an odd enough occurrence. About April, Martin M. Kimberly and Daniel E. Way staked out a claim or two, and some miners agreed on a code of laws for operations in what was to be known as the San Pedro Mining District, the boundaries of which were to include all the islands in the county. Extensive claims, chiefly in Cherry and Joly valleys were laid out for a town to be known as Queen City; but just as the boom seemed likely to mature, the National Government stepped in and gave a quietus to the whole affair. With or without foundation, reports had reached the Federal authorities that the movement was but a cloak to establish there well-fortified Confederate headquarters for the fitting out and repair of privateers intending to prey upon the coast-wise traders; and on February 45th, 1864, Captain B. R. West, commanding the Fourth California Infantry, ordered practically all of the miners and prospectors to leave the island at once. The following September the National troops were withdrawn, and after the War the Federal authorities retained control of a point on the island deemed serviceable for lighthouse purposes..." [Newmark, Harris. Sixty Years in Southern California 1853-1913, 1926.]

April 1863. [February 21, 1932 LAT]: “…In the 1860s Catalina had a gold rush. The first claim was that of Martin M. Kimberly and Daniel E. Way, recorded in April 1863. Assays on this claim ranged from $150 to $800 a ton. Stock companies were hastily formed, a site for the ‘Queen City’ was chosen, and city lots were staked out on the all but uninhabited island. But the only real mine found on the place was found to be Captain Timms’ paint mine, and even that was a failure, so the boom came to naught.”

July 30, 1886 [KEJI]: “My trip this summer to Santa Catalina Island… then descending we came into Fourth of July valley. When in times of gold fever, this valley was prospected for gold, and is literally peppered with holes…”

June 11, 1901 [LAT/SCat]: “Avalon. Vincente Moricich electrified this quiet burg Saturday by flashing up a piece of rock shot so full of free gold that one could scarcely be sure whether quartz or gold predominated. He asserts that it was picked up on the island high up on the beach, but where the water washes it at extreme high tide, and thus the ledge from which it came is left in uncertainty, but he is making a search for it. Were it not for the fact that a mining claim cannot be taken up on Santa Catalina the beaches and hills would be alive with prospectors looking for this hidden Golconda. The rock would probably assay $30,000 to the ton. Vincente is not taking the public into his confidence, as to where he picked up the valuable rock, at present.”

June 14, 1901 [LAT/SCat]: “Avalon. More gold found on Santa Catalina, but mother lode undiscovered. Vincente Moricich has not yet succeeded in finding the ledge from which his rich rock came, but he has found another much richer piece. It is really a nugget, there appearing but two bits of gold in the lump. It is valued at $9 or $10. Vincente will have it mounted as a scarf pin. In case the ledge is found, the Banning Company will give him the privilege of working the mine, with all the rights of a government claim,, for 15 percent of the gross output…”