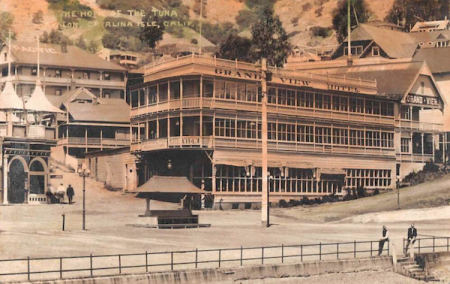 May 12, 1892 [LAH]: “Charming Catalina. Being put in trim for the summer. Streets and Boulevards made—a new Pavilion—additions to the hotel. Water being developed. From a gentleman who has just returned from a visit to Santa Catalina Island, a Herald reporter yesterday got some interesting points as to the many improvements being made over there by the Banning Brothers. A good compact macadamized street has been made of Crescent Avenue. The material for making the road was obtained from the west end of Avalon bay and a beautiful promenade is made in that side as well. The Pavilion is rapidly approaching completion. It is circular in form, with a dancing floor 75 feet in diameter. There is a stage at the land side 70 feet wide and 50 feet deep. The building is glass enclosed and on the outside is a verandah ten feet wide, which will be utilized as a cafe. A complete sewer system is being put in. The sewage is carried in pipes out beyond seal rock and emptied into the ocean. This is a system for the whole island. Much water has been developed, and a reservoir 35 feet in diameter and 15 feet deep is being built, and there is a new track house going up west of the wharf. The biggest improvement is being made at the Hotel Metropole. Forty rooms have been added, a new kitchen built and building erected for the bar and billiard room. The hotel is being repainted and repapered and will be newly furnished throughout. The Grand View is the name of a new thirty-room hotel erected by George E. Weaver. The Avalon Home, a new house erected by E. J. Whitney, and half a dozen large boarding houses will furnish accommodations for all. The season will open about June 15, and on July 1 a large steamer will be out on and daily trips made. This year there will be no charge to campers for ground or water. Everything points to the fact that there will be a great flow of visitors to Catalina this season.”