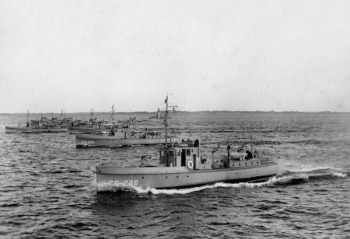 No photos exist of the Grey Ghost, but this was the type of Coast Guard patrol boat that would have chased down Prohibition-era smugglers in the Santa Barbara Channel.

1926: “At 10:30 a.m., November 13, the CG-254, Boatswain (T) L.H. Williams, Officer-in-charge, while on patrol off Cochies [Coches] Prietos, Santa Cruz Island, sighted the fast motor-boat A-1370, powered with two 300 H.P. Sterling engines and known as the Grey Ghost. This boat was about 1600 yards distant when sighted and the CG-254 gave chase at once, firing one bland one-pounder and two service charges across her bow. The A-1370 failed to heave-to and it was then apparent to the Officer-in-charge, CG-254, that she was loaded with contraband and endeavoring to escape. The Officer-in-charge fired 59 rounds of one-pounders making six direct hits, one through her pilothouse and another at her starboard waterline, doing considerable damage and partially disabling the A-1370. At the same time Mo.M.M.2c Edward O. Caliouette manned the machine gun from the top of the pilothouse, expending ten magazines and making numerous hits. The A-1370 was now disabled to such an extent that it headed for the Island to avoid sinking and was run ashore at 10:50 a.m. on a rocky beach about one and one-half miles east of Valley Anchorage, Santa Cruz Island. The Officer-in-charge, CG-254, immediately lowered the dinghy and boarded the rum-runner. A moderate surf was running at the time and the rum-runner was swamped and partially submerged. It was ascertained that the A-1370 was loaded with approximately two hundred (200) sacks of imported whiskey, two of which were removed and placed aboard the CG-254 for evidence of violation of Section 593-A, Tariff Act of 1922. Near the wreck two oak half-barrels (about twenty gallons each) of liquor were found floating and they were also placed aboard the CG-254. The CG-254 then reported the seizure to the base by radio-telephone and requested the assistance of another patrol boat with a dory, a dory being more suitable for unloading the beached rum-runner. The CG-254, while standing by the rum-runner for four hours, endeavored to unload or tow off the beached vessel from the rocks but this could not be accomplished. Up to this time no person had been sighted on the A-1370 and it was presumed that the operator of same had escaped ashore at the time she was beached and accordingly parties were sent out by the CG-254 to capture him. The first two parties found no trace of anyone, but the third party, consisting of Mo.M.M.2c Edward O. Caliouette, found a man hidden between some boulders about thirty yards from the A-1370 and brought him aboard the CG-254 AT 2:30 p.m. ... His clothing being still wet from the surf and the fact that he was hiding led the Officer-in-charge to believe that he was the operator of the A-1370 and he was accordingly arrested as such. At 12:30 p.m., 13 November, the CG-259 was sent from the Base to assist the CG-254. The CG-259 arrived at the scene of the seizure at 11:30 p.m. to return to the Base. A heavy surf prevented the CG-259 from doing any work toward saving the cargo of the seized rum-runner that night, but the following morning, at 6:30 a.m., they began to unload the liquor from the A-1370 in a heavy surf. While working on the rum-runner the men were several times washed overboard by the surf, the boat being two-thirds under water. At 3:00 p.m. fifty (50) sacks of liquor had been recovered and the CG-259 could find no more. The CG-259 left the scene of the seizure at 3:30 a.m., November 15, to return to the Base. A later report stated that the Grey Ghost "is a total loss, no part of the engines or equipment being salvaged.” [Morris & Lima. Submerged Cultural Resources Assessment. Channel Islands National Park and Channel Islands National Marine Sanctuary.]

February 27, 2020 [Independent]: “During Prohibition, rumrunners played cat and mouse with the Coast Guard among the islands, where small caves and remote coves offered convenient hiding places. On November 13, 1926, a Coast Guard patrol spotted the Grey Ghost darting along the south edge of Santa Cruz Island and fired three shots across her bow. The Grey Ghost “failed to heave-to,” the official incident report reads, and “it was then apparent to the officer-in-charge … that she was loaded with contraband and endeavoring to escape.” The Coast Guard gave chase and fired 59 shots from its autocannon, scoring six direct hits, including one through her pilothouse and another at her starboard waterline, “doing considerable damage.” Meanwhile, the machine-gunner burned through 10 magazines of ammunition, “making numerous hits.” Now close to sinking, the Grey Ghost turned toward the coast and ran ashore. Its single occupant jumped out and escaped. It took three search parties, but the Coast Guard finally found the man hiding among some boulders. They seized 200 sacks of imported whiskey and two oak halfbarrels of liquor (about 20 gallons each) from the wreck.”