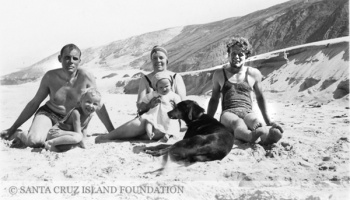 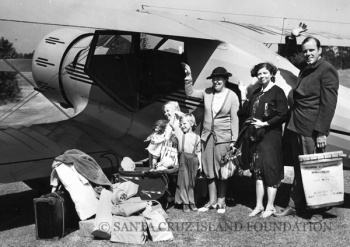 Mr. & Mrs. George Hammond and the Lester family with the mailbag at Bonnymeade, Santa Barbara, September 11, 1938 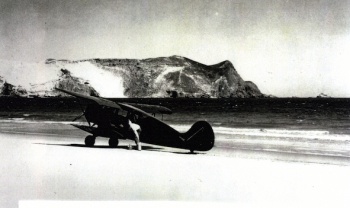 George Hammond landed his Waco at Cuyler's Harbor Beach for a swim,
May 5, 1935, San Miguel Island 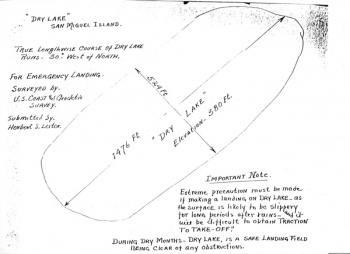 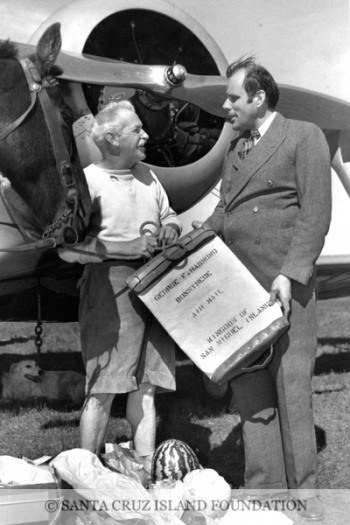 HAMMOND, George Fiske (1897-1982)[SS#555-01-5369], Boston-born prominent Santa Barbara resident and 1926 graduate of the University of California. Hammond was an aviation pioneer, taught to fly by pioneer pilot, Earle Ovington. Hammond regularly landed on several of the Channel Islands, particularly San Miguel, where he made over 200 flights. On November 8, 1933 he was reported overdue after his plane had a flat tire on Santa Cruz Island. Hammond befriended the Lester family on San Miguel Island and often flew mail and supplies from his private airstrip on his family estate in Montecito to the isolated island family. He made his first landing on San Miguel Island on July 22, 1934 in a 220 h. p. Travel Air Biplane. This was replaced with a Cabin Waco, and in turn it was replaced with a 450 h.p. Beechcraft Biplane. Hammond maintained the airfield on San Miguel Island named in his honor, and logged over 200 flights to San Miguel Island.

In 1947 Hammond and his friend David Gray provided air transportation for personnel and supplies to the Santa Barbara Museum of Natural History and Phil Orr’s archaeological work on Santa Rosa Island.

November 8, 1933 [SBMP]: “A flat tire on the airplane of George F. Hammond, local flier, last night caused a widespread search for him when he became overdue for hours after his expected return home from a flight to Santa Cruz Island. His sister, Miss Frances Hammond, 340 Channel Drive, had expected her brother about 5 P.M. He left at 3 P.M. She did not hear from him until he telephoned about 10 P.M. as soon as he arrived on a fishing boat. ‘We chartered Captain Sanborn's cruiser the Traveler,’ she said, ‘and sent it out across the channel to hunt for my brother. There was no way to recall it when my brother arrived. ‘My brother had landed about half way between the two ranches on Santa Cruz Island, and had to walk three miles to a ranch house. He got a ranch man to show him to the harbor, and signaled a fishing boat to come in. My brother returned on the boat about 10 P.M. and cooked his supper en route. He expects to get a new tire tonight and return at once to the island to fly his plane back home.’”

Hammond Airfield, San Miguel Island is one of two unimproved dirt landing strips for fixed wing aircraft on San Miguel Island. In 1934 it was surveyed by the U.S. Coast & Geodetic Survey team along with Herbert Lester, self-proclaimed deputy sheriff of San Miguel Island, and pilot George Hammond. The airstrip was 918 feet in length by 574 feet in width. It was placed 4428 feet from the former ranch house.