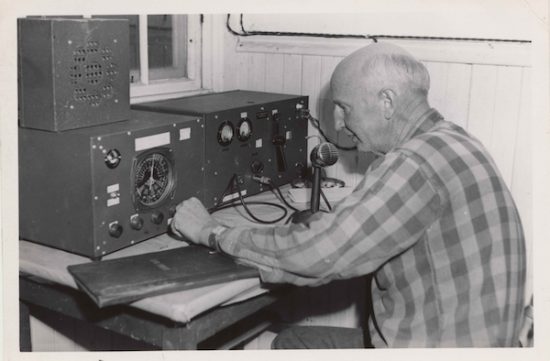 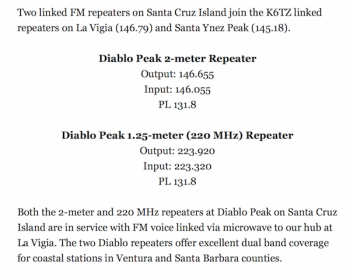 The first radio communications from Santa Cruz Island were established in 1927 by short wave radio. A shortwave radio broadcasts stations that are in the shortwave range of the electromagnetic spectrum. These are broadcast stations.

Amateur radio operators use Ham Radio for their transmissions. Historically they confirmed contact with sending QSL cards. The term “QSL” comes from the international Q code and means “I confirm receipt of your transmission”. A QSL card is a written confirmation of either a two-way radio communication between two amateur radio stations; a one-way reception of a signal from an AM radio, FM radio, television or shortwave broadcasting station; or the reception of a two-way radio communication by a third party listener. It was once a great thrill for a ham radio operator to receive a QSL card after a contact with some far off place. But they've lost their importance for most hams now.

On the Santa Rosa Island QSL card, SSB indicates that these were Single Sideband voice contacts. The time is in UTC/Greenwich Mean Time and the RST reading stands for Readability, Signal Strength, Tone. Tone is omitted for voice contacts so these only show two numbers: 57 and 59 respectively.

There is an online database to lookup current callsigns. Finding expired or former callsigns assignments can be trickier, but it is possible.

IOTA [San Clemente Island QSL card] is the Islands On The Air) Program that has caught the interest of thousands of radio amateurs worldwide. Established in 1964, it promotes radio contacts with stations located on islands around the world to enrich the experience of all active on the amateur bands and, to do this, it draws on the widespread mystique surrounding islands. It is administered by Islands On The Air (IOTA) Ltd (called IOTA Management) in partnership with the Radio Society of Great Britain (RSGB).

IOTA Management has grouped the oceans' islands into some 1200 'IOTA groups' with, for reasons of geography, varying numbers of 'counters', i.e. qualifying islands, in each group and has published the listings in the IOTA Directory and on the IOTA website. The objective, for the IOTA Island Chaser, is to make radio contact with at least one counter in as many of these groups as possible and, for the IOTA Island Activator, to provide such island contacts. The program has a strong rule structure. IOTA Management encourages friendly competition among chasers by publishing details of participants' performance in an Honor Roll and annual listings, as well as by recognizing it with certificates and prestige awards.

The IOTA group maintains this sheet which lists the percentage of active IOTA users that have a credit for each group. A group with a low percentage of credits is considered a rare group. IOTA Groups NA-144, includes San Miguel, Santa Rosa, Santa Cruz (including Gull Is.) and all the Anacapa islands.

All things considered, the Channel Islands are relatively rare, but not entirely uncommon to have radio activity on.

May 1, 1908 [SBI]: “Permanent wireless telegraph connection between Santa Barbara Islands and this city is the project now being seriously considered by Captain W. G. Waters, owner of San Miguel Island… J. S. Reynolds has offered to install the system, and it now seems likely that before many weeks dwellers on San Miguel and Santa Cruz and Santa Rosa islands will be able to transact business and talk to their friends on the mainland by wireless…”

May 17, 1916 [SBDN]: “Because of the rapid growth of the summer colony on Santa Cruz Island, there are now plans afoot to establish a radio station at Captain Ira Eaton’s camp for rapid connection with the mainland. It is predicted that this summer will see over twice the ordinary number of island colonists. Captain Eaton has elaborate plans for his camp, and the need of a radio station is realized. It is explained that the naval militia could maintain a station and work with their station here. By reducing the power of the machine it is believed the federal government would issue a license, so it could be operated between certain periods of each day. Last year attempts were made to flash messages, but mirrors of sufficient size could not be secured. It is believed that the radio station will be established and in service by June 15, an application having already been made to the government. Many wealthy Montecito families are planning to spend a portion of the summer on the island, which adds additional reason for the installation of the proposed station.”

October 14, 1927 [ODC]: “Commercial radio communication between Santa Cruz Island and the mainland has been established for the first time in history, with the successful completion of trans-channel tests. The two complete 50-watt radio telegraph stations were built in the laboratories. The transmitting apparatus at both stations is of the latest shortwave type. It is of simple, rugged construction and incorporates the Heintz modification of the ‘tuned plate, tuned grid’ circuit, made famous by its recent remarkable performance aboard the ill-fated Erwin plan, ‘Dallas Spirit.’ Each of the two stations will be in charge of a licensed commercial radio operator, and will work on a wave length of 69.73 meters, far below the conventional broadcasting wave band, so that no interference will be caused to local listeners and broadcast fans. The mainland station is located in Santa Barbara.”