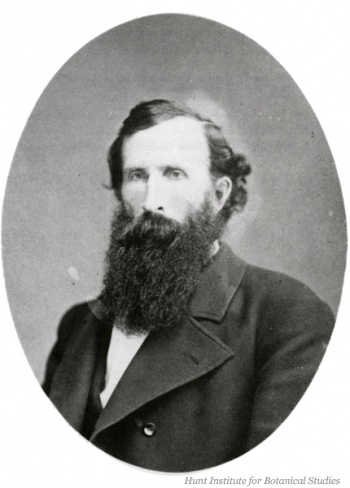 HARFORD, William George Willoughby (1825-1911), director of the California Academy of Sciences from 1876 to 1886, was a naturalist interested in botany, ornithology and conchology. Harford traveled to various Channel Islands, often in the company of Albert Kellogg. Harford collected birds on San Miguel Island in 1871 now in the Smithsonian [#61437-61449]. In 1872 he visited Santa Rosa Island and San Miguel islands, conducting limited excavations for archaeological artifacts [Smithsonian accession record #2747]. In the company of Kellogg, Harford was the first scientist to collect botanical specimens on Santa Rosa Island (1872) and Santa Cruz Island (1874) where he again collected in 1876. Harford and Kellogg collected the type specimen of the endemic northern island bush poppy (Dendromecon rigida ssp. harfordii) which is found on Santa Cruz and Santa Rosa islands and is named in his honor. They also collected the type specimen of Jepsonia malvifolia on Santa Cruz Island in 1874, as well as the type specimen of Hazardia. Birds he collected on San Miguel in October 1871 are in the U.S. National Museum of Natural History.

In 1880 Harford sent to botanist George Engelmann a specimen of Coreopsis, (Leptosyne gigantea) he had collected in 1870 on “an islet in Cuyler Harbor, San Miguel Island.” He noted “at the date of my visit this was the most beautiful sight I ever beheld in any one species of the Pacific coast compositae”: Biodiversitylibrary.org

Harford was the director of the California Academy of Sciences in San Francisco from 1876-1886. He was a member of a group of enthusiastic collectors of the day that included botanist Albert Kellogg (1813-1887), conchologist Henry Hemphill (1830-1914), C. D. Voy, R. E. C. Stearns and others.

November 21, 1871 [SFDEB]: “W. G. W. Harford presented before the Academy the following remarkable variety of composite, collected under the auspices of Captain S. Forney of the U. S. Coast Survey in Cuyler Harbor, San Miguel Island. The same form, we are also informed, abounds on Santa Catalina Island off the coast of San Pedro: The plant from the rocky cliffs often overhang the main shore, is a simple perennial herb, one foot or so high, terminated by a single flower, known to science as Leptosyne maritima or Tuckermanni’s maritima of Nutt, which later genus has been abolished... Dr. Kellogg said no plant had ever been brought to public notice which possesses so much interest as this…”

December 2, 1871 [PRP]: “At the last meeting of the California Academy of Sciences, Mr. W. G. W. Harford submitted a remarkable plant from San Miguel Island, which is about 30 miles off the coast from Santa Barbara. It is known to science as Leptosyne maritima. It also abounds on Santa Catalina off the coast of San Pedro. The peculiarity of this particular specimen consisted in its enlarged size and general robust appearance, when contrasted with that of the same species grown on the mainland in Santa Barbara county, near the coast, where it is a fine golden flower two or three inches in diameter with the stem about the size of a quill. The one exhibited differs greatly in size, so much so, that aside from close botanical alliance no one would casually suspect any kindred or special family resemblance…”

June 1874 [OM 12:6]: “The Lord of the Isles… Most of the islands are abundantly supplied with these shell-heaps, but they are particularly large and prolific in articles of use or ornament, on the outer desert islands of Clemente, San Nicolas and San Miguel. Those on Catalina are comparatively destitute of implements or human remains… Various persons have visited these deposits, and returned more or less repaid with ethnological material—especially some of the officers of the U. S. Coast Survey, who so employed the leisure afforded by weather unfavorable for surveying work. Of these, by far the richest collection was made by Mr. Harford. It is now in the National Museum at Washington, and was obtained on the island of San Miguel…”

[1876]: “Little attention was paid to this most valuable archaeological discovery [San Nicolas Island] until 1872 and 1873 when Mr. W. G. W. Harford, of the United States Coast Survey, happened on the islands of San Miguel and Santa Rosa, lying to the northward and westward of the islands before mentioned. From these islands this gentleman procured a small but exceedingly valuable collection of interesting objects, which came into the hands of Mr. William Dall, a most intelegent and enthusiastic collector, from which he deemed the locality of sufficient importance to visit it in person…” [Wheeler, George. Annual Report upon the Geographical Surveys west of the one hundredth meridian, in California, Nevada, Utah, Colorado, Wyoming, New Mexico, Arizona, and Montana. Appendix JJ. Washington:GPO, 1876.]

July 23, 1882 [LAT]: “…Little attention, writes Assistant Surgeon H. C. Yarrow, was paid to these islands until 1873 when Mr. W. G. Harford, of the United States Coast Survey, happening to visit San Miguel and Santa Rosa, obtained a collection of interesting objects. This falling into the hands of Mr. W. H. Dall was deemed by him of such interest as to induce him to visit these islands in 1874…”