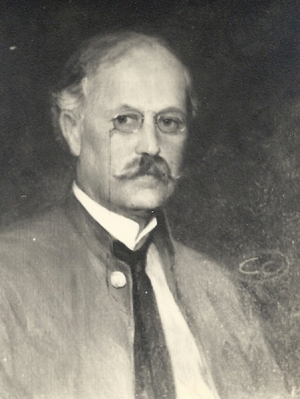 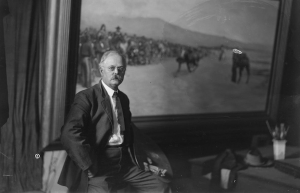 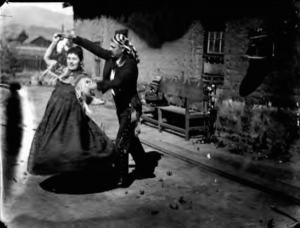 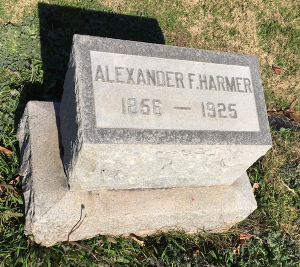 HARMER, Alexander Francis (1856-1925), New Jersey-born illustrator and painter who sold his first work at age 11. He sold illustrations to Harper’s Weekly and later began painting Indian portraits and depicting the American west. Harmer settled in Santa Barbara in 1906 and married into the Abadie family, one of the pioneer California families. He is considered Southern California’s first great painter of the 19th century. At the family home of Felicidad, Harmer established the first art colony on the West coast. A series of studios was added to the Spanish-Colonial adobe home and Harmer and his family welcomed numerous artists to stay between 1908 and into the 1920s. Some of the many artists who spent time there include Robert Wagner, Thomas Moran, Carl Oscar Borg, John Gamble, Frank Morley Fletcher, Joseph Knowles, Albert Herters, William Otte, Frank Tenney Johnson, Clarence Mattei, and Edward Borein. This modest colony that Harmer established in Santa Barbara saw many of the most important Western artists of the late 19th and early 20th centuries pass through its doors. Alexander Harmer died in 1925, leaving a legacy of art dedicated to the American West. The Harmers are buried in Calvary Cemetery, Santa Barbara.

August 10, 1906 [SBMP]: “Mr. and Mrs. George McComber, Mr. and Mrs. Patton, and Mr. and Mrs. Alexander F. Harmer and Dr. Huntington and son have returned yesterday from Santa Cruz Island where they have been camping for two weeks. They made the trip on the Anita, Captain Koch.”

August 12, 1906 [LAT]: “Mr. and Mrs. George McComber, Mr. and Mrs. Patton, Mr. and Mrs. Alexander F. Harmer, and Dr. Huntington and son returned yesterday from Santa Cruz Island, where they have been camping for two weeks. They made the trip on the Anita.”

August 12, 1906 [LAT]: “Alexander F. Harmer, who was a member of the Patton party recently visiting Santa Cruz Island for a couple of weeks, brings with him on his return a series of six pictures painted or outlined while on the island. Mr. Harmer does not claim to be a marine artist, yet he has been most successful in his first work across the channel.”

June 29, 1907 [SBI]: “Coert Voohees and Teddy Conant left for the islands this morning in the sailing craft Peggy. The boys will visit Friar’s Harbor for a few days, and before returning will spend a day with Alex Harmer, the local artist who is making a painting of the island harbors.”

January 9, 1925 [SBMP]: “Dean of S.B. Art Colony is dead. Alexander F. Harmer succumbs at De La Guerra Plaza home. Long resident here. Colorful character lies behind well-known Santa Barbara artist. Alexander F. Harmer, one of the best-known artists of Santa Barbara, died suddenly late yesterday afternoon at his home in De La Guerra plaza at the age of 68. Mr. Harmer had been ill for more than a month, but after a walk about State Street yesterday afternoon he returned to his home apparently in good health. He collapsed on the porch of his home, where he was found at 5:30 o'clock by his son, Alfred. He died before a doctor could reach him. Mr. Harmer had lived in Santa Barbara for more than 30 years, making his home in the adobe building adjoining the city hall. He was born in Newark, N.J., August 21, 1856. His artistic talent developed early in life. At the age of 11 he sold his first oil painting for the sum of $2. Working as a messenger boy in a telegraph office, he saved a few dollars and at 13 started west, working his way by degrees as far as Lincoln, Neb., which in those days was considered remote. At 15 he decided to study art, and began working his way back toward Philadelphia. At Cincinati, after a hard search for work, he enlisted in the army for five years, and after some time found himself _____[?]. First United States Calvary at Benicia Barracks, California, where he was held at headquarters on detached service. He was hospital steward at Benicia and at Halleck, Nev. After two years' service he secured an honorable discharge. At the age of 19 he returned to Philadelphia by way of Panama. He worked awhile in a photography gallery, spending every spare moment in drawing. His work secured recognition from William T. Richards, and the now famous Joseph Pennell, and Sartain the engraver. Through their good offices and his own ability, he was admitted to the Pennsylvania Academy of Fine Arts. After two years of hard work there, he decided to go southwest and paint, so again, with the understanding that he should be assigned to cavalry service in Arizona where the Indians were then habitually on the warpath, he rejoined the army. He spent two active years, and after a few weeks at General Wilcox's headquarters, joined the Sixth Cavalry under Captain McClellan. After a year with the cavalry he was assigned to duty with Gen. George Crook. "The Grey Fox." In the campaign of 1883, when Crook penetrated the Sierra Madre of Mexico and brought out Geronimo, Mr. Harmer was picked to be one of the party, the only enlisted man from headquarters. On his return from that expedition he was transferred at his own request to the San Carlos Indian reservation, where he spent several years studying the Missions and early California life. A year in the interior of Old Mexico, and another term in Philadelphia, found him in California for good. He was married in 1893 to Felicidad A. Abadie, whom he had met at the home of Ramona, famous in literature, and since 1894 had made his home here, devoting himself chiefly to painting the days before the Gringo came. His historical canvases, including "Ramona" and the "Fiesta on the East Boulevard," hold places of honor in many California homes. Mr. Harmer is survived by his widow, Felicidad Abadie Harmer, and seven children: Mrs. J. K. Northrup, A. Bertrand Harmer, Helen Harmer, Ernest Harmer, Ethel Harmer, Olga Harmer and Alfred Harmer, all of Santa Barbara. A sister, Mrs. Fanny Scatchaid of New York state, and three brothers, Clarence Harmer and Arthur Harmer, residing in the east, and George Harmer of Long Beach, also survive. Funeral services will be held tomorrow from the Santa Barbara Funeral home.”