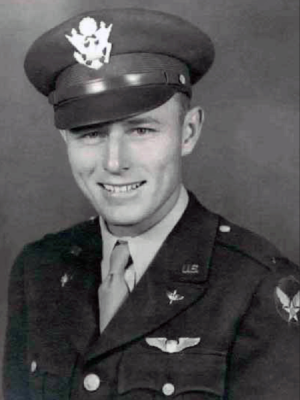 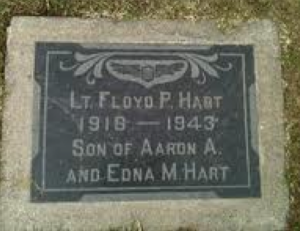 Hart's hometown was LaTrobe, Pennsylvania. He was the son of Aaron A. Hart and Edna M. Hart. He grew up in Bakersfield and went to Kern County Union High School. He was an employee of of Douglas Aircraft Company at El Segundo when he was accepted as a cadet on July 25, 1942.

Hart was a Radio Operator on B-24E #42-7160 that was following B-24E #42-7011 'The Eddie Rickenbacker', Major Thorel 'Skip' Johnson's Crew, on a search and rescue mission for two that had bailed out over the Pacific Ocean. Their ship had been using fuel at an excessive rate prior to losing two engines over the Pacific off the coast of Santa Barbara. Pilot Johnson ordered the crew into their parachutes and turned the plane around, heading back towards Santa Barbara. Two airmen, Dannhardt and Prosser, not knowing they were still over the Pacific, bailed out prior to the Pilot giving the order and thus were lost at sea. The remaining eight crewmen bailed out safely once the plane had reached land over the mountains. The unmanned plane crashed 10 miles north of Santa Barbara on 04 July 1943.

The Command Pilot of B-24E #42-7160, Lieutenant Douglas J. Thornburg, was one of four survivors who had bailed out of B-24E #42-7119 that crashed three weeks earlier. B-24E #42-7160 descended in heavy developing fog to take a closer look, and crashed head-on into Green Mountain on San Miguel Island. A search was then initiated for this plane once it was known that they had lost contact. Eventually the search was called off and it was thought that the plane must have ditched in the Pacific. The following March, a Sheepherder named Robert Brooks, one of only two people living on San Miguel Island at the time, found the plane and the remains of the twelve airmen on 800-foot Green Mountain. The plane and crew had crashed at approximately the 500-foot elevation. In 1954, additional crew remains were reported, and the Coast Guard Cutter Morris was dispatched, however, it collided with the yacht Aloha, resulting in two civilian casualties. After this, the military began using the San Miguel Island for target practice.