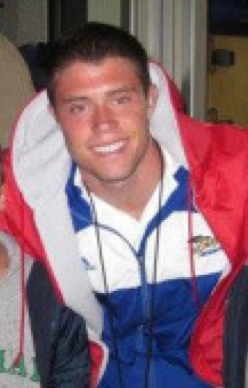 September 8, 2015 [facebook]: It is with profound sadness that we tell you our son Tyler Hayden was a passenger in the tragic boating incident off Catalina Island September 6, 2015. While four of the five passengers have been accounted for, Tyler remains missing. Tyler was a wonderful son, brother, and friend, giving us more joy in 25 years than anyone can imagine. He had so many close friends that he considered his family, and he will be deeply missed by all. Much Love, Gary, Dianne and Carrie. NOTE: Tyler Hayden was a 2008 Shorecrest alumnus.”

September 10, 2015 [mynorthwest.com]]: “Dori Monson honors Tyler Hayden, who was killed in Catalina boat crash. Tyler Hayden was killed in a tragic boat accident near Catalina Island over Labor Day weekend. You may have heard that the son of the former chief executive of the San Francisco 49ers, Peter Harris, was killed in a boat collision off Catalina Island over Labor Day weekend. What you probably didn’t hear was that one of the missing passengers was Tyler Hayden, a young man from Lake Forest Park, Wash. Twenty years ago on Wednesday, Dori’s oldest daughter came home from kindergarten and told her dad that she met a new friend. His name was Tyler. Tyler Hayden. The two kids remained friends through their school years – even into college. “If my daughter was going out with a group of friends in high school, I’d ask who was going to be part of that group. If Tyler was part of that group, you knew that your daughter was going to be safe,” Dori said. “He and his buddies were always so respectful to girls. They always had their backs. They’re the kind of kids you want your kids to hang out with.” Dori said Tyler, a student at Shorecrest High School and two-time All-American swimmer, was a passionate lover of Seattle sports and would write essays about the Seahawks. “Tyler was just an absolutely wonderful young man,” Dori said. “I’d like you to keep his family, Gary and Diane, in your prayers.” Authorities have called off the search for Tyler.”

September 5, 2017 [Daily Breeze]: “The parents of two young men killed in a collision between a dinghy and a larger vessel near Catalina Island in 2015 are suing the manufacturer of the bigger boat and its owners, alleging it had defective navigational lights and that the lookout was an inexperienced minor. A third lawsuit targets Tradewood Inflatables & Marine Inc., which designed the dinghy’s seating and lighting assemblies. One of those who died, 26-year-old Michael Joseph Harris, was the son of onetime San Francisco 49ers CEO Peter Harris. Also killed was 25-year-old Tyler Garrett Hayden. Kelly Margaret Wells, who was with Harris and Hayden in the dinghy, was injured. The plaintiffs are Peter Harris and his wife, Janet, the father and mother of Michael Harris; Hayden’s parents, Gary and Dianne Hayden; and Wells. The wrongful death complaints were filed last week in Los Angeles Superior Court. In one suit, the plaintiffs are suing Boston Whaler Boats and Brunswick Boats Inc., which sold the 17-foot larger vessel, dubbed the Mark L. Bixby. In the second lawsuit, they name as defendants the parents of the 17-year-old who allegedly was the lookout on the Bixby when it collided with the dinghy, named the Sirena. The minor also is a defendant. The third lawsuit alleges the dinghy also did not have proper navigational warning lights, nor was there a warning to passengers to avoid sitting in places that could block other boats from seeing the lights. Representatives for the defendants could not be reached. The accident near Descanso Bay occurred about 1:15 a.m. on Sept. 6, 2015, when the Sirena was hit by the Bixby. The dinghy was headed back from Avalon — where those aboard had gone earlier to watch a USC football game together — to its parent boat, the Wasabi, at White’s Cove on Catalina Island, the second suit states. The Bixby “was not equipped with necessary and reasonable navigation lights ... thereby not giving notice to other vehicles of its presence,” the first suit states. The lawsuit against the minor and her parents alleges the 17-year-old girl “took part in the operation and lookout” of the Bixby “and did so in darkness ... and did so on a busy and crowded Labor Day weekend ... and did so while the Mark L. Bixby was traveling at high and/or excessive speeds.” Her parents should not have allowed their daughter to be a lookout on the Bixby when it was traveling in darkness without proper navigational lighting and while it was moving at high speed in a crowded area, according to the lawsuit.”