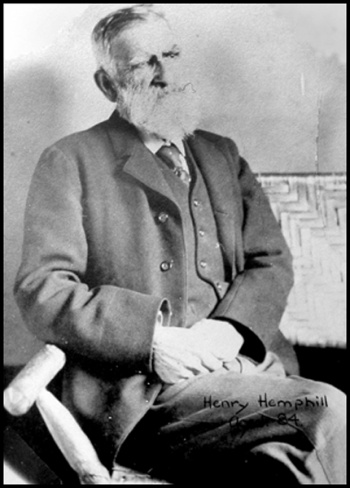 HEMPHILL, Henry (1830-1914), Delaware-born malacologist who came to California in about 1864 where be made friends with R. E. C. Stearns who mentored Hemphill in the study of mollusks. As early as 1875 and continuing into the 1890s, Hemphill published catalogues of shells “collected and for sale by Henry Hemphill, San Diego, California.” He collected plants on Santa Catalina Island in 1875; on Santa Barbara, Anacapa and Santa Cruz islands in 1901; and San Miguel islands around the turn of the century, collecting both mollusks and lizards, as well as plant specimens. Hemphill was a mason by trade and many of the old San Diego brick buildings are his handiwork. He lived most of his life in his own brick-built house on Third Street, surrounded by his collections. Long a widower, when nearing 80, Hemphill moved to Oakland, California to live with his only daughter.

At the time of his death Hemphill’s collection contained an estimated 60,000-70,000 specimens of 12,000 to 15,000 species. Hemphill died in of arsenic poisoning Oakland on July 24, 1914 at the age of 84. His collections can be found at both Stanford University and the California Academy of Sciences, as well as in large museums around the world. The genus of slugs, Hemphillia, was named in his honor by W. G. Binney.

Hemphill's Anacapa Island plant collections are among the first plants known to have been collected on the island.

September 3, 1887 [Coronado Mercury]: The San Diego Society of Natural History met at their rooms on Sixth Street last evening. Dr. Cleveland presided. The minutes of the previous meeting, held November 12th, 1886 were read and passed. The following letter was read:

San Diego, Cal., June 3rd, 1887. D. Cleveland, Esq. — Dear Sir: Your note of yesterday is at hand. I am happy to say the shells are completed and in cases at the Society's rooms. The collection is a general one and from all parts of the world, and contains 1036 species and varieties, moulded in 1036 trays. I have not had time to verify all the species by comparison with specmens in my own collection or reference to authorities in every case, but they are sufficiently correct for present purposes, and any errors or mistakes can be corrected in the future. It has taken all my leisure time the past four months to prepare and mount the collection and I trust it may prove of some service to the members of the Society interested in the study of shells and the animals that inhabit them as well as attractive to those who look at them simply as objects of curiosity or beauty. I hope be able to add materially to the collection in the future. Very truly yours, Henry Hemphill

At the meeting of Directors held August 16th, it was resolved that —

Whereas Mr. Henry Hemphill has donated to the Society a large and valuable collection of shells, and has also given a great deal of his time to their arrangement and classification in our cabinets; now therefore be it

Resolved, That we tender Mr. Henry Hemphill the thanks of this society for his valuable donation, and for his services and time spent in connection with it.

Resolved, That we recommend the election of Mr. Henry Hemphill to a life membership in this society in grateful appreciation of his gift.

Resolved, That a copy of these resolutions be presented to Mr. Hemphill by the Secretary.”

October 14, 1899 [SF Call]: “Almost a centenarian. Oakland, Oct. 13. —Uriah Hemphill, one of the earliest settlers of this city, died today at his home, 949 Chestnut Street, at the advanced age of 97 years. Deceased was a native of Wilmington, Del., and came to the coast in the pioneer days. By occupation he was a baker and for many years conducted a bakery on lower Broadway, but he has not been actively engaged in business for some time. He leaves a son, Henry Hemphill.”