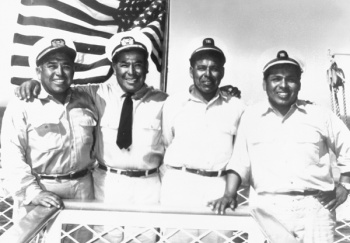 HERNANDEZ, Manuel (1875-1937) and Silveria (1878-1969), along with their three Mexico-born sons, Salvador, Frank and Angel, arrived on Santa Catalina Island from Mexico’s state of Michoacan in the early 1900s. In all they had nine children, seven boys and two girls.

Manuel Hernandez worked for the Banning brothers collecting trash with a horse-drawn wagon and driving it to the local dump. Occasionally he took the wagon to the Isthmus to collect trash. Eventually the Hernandez children and grandchildren worked and became involved in many Santa Catalina Island events and sports activities that were part of the growth and development of the island. Sons Marcelino, Andy and Sam got their captain’s license and worked for the Catalina Island Company operating the Blanche W, used for decades for the Flying Fish Trip, Isthmus Trip, and Seal Rock Trip. These three also played native parts in the movie, South of Pago Pago, filmed on the island. Brother Manuel worked as a deckhand on Wrigley’s boats.

There are more than a dozen Hernandez family members buried in Avalon Cemetery, including patriarch, Manuel Hernandez.

August 23, 1933 [TI/Avalon]: “Andrew R. Hernandez and Jennie E. Correa were married at the social hall on Termont Street on Wednesday, August 16, with the local Justice of the Peace officiating at the ceremony. Many friends of the bride and groom were present. The bride, dressed in white, was escorted down the hall on the arm of Mr. I Tarango. The social hall was artistically decorated with palms, flowers and flags for the occasion. The bridegroom is the son of Mr. and Mrs. Manuel Hernandez, and was born in Avalon some nineteen years ago. The bride was born in San Gabriel, but for several years has been a resident of Avalon. The happy couple were the recipients of many beautiful presents from friends and relatives. They plan to make their home in Avalon.”

July 11, 1980 [TI]: “Andrew Hernandez passed away at the Avalon Municipal Hospital on Sunday, July 6. He was born in Avalon on February 4, 1914 … He is survived by his wife, Jeannie, sons Robert, Michael and Richard; daughters Eleanor Simpson and Jennifer Jones; brothers Sam and Manuel; and sisters Catherine and Mary. He was a captain on the tour boats of the Santa Catalina Island Company for over 30 years.”