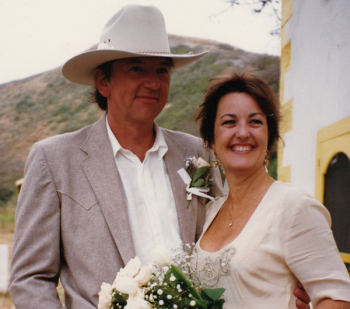 HEROLD, Loren and Keith were both born on October 23, 1948. They met on Santa Cruz Island when Keith Herold was the manager of the Christy Ranch, first for Channel Islands Aviation, and then for the Santa Barbara Museum of Natural History. They were married at Christy Ranch on May 23, 1992.

Keith grew up in Goleta and worked in the family orchard until he became ranch manager for private ranches in the area. He started managing Christy Ranch in 1988, as a guide for the feral pig hunting operation, and managing and touring groups of guests who spent weekends to see the island. Subsequently he worked with Lyndal Laughrin at the UCSB Field Reserve until he retired in 2005.

Loren grew up in Claremont and is a landscape architect who managed her own firm in downtown Los Angeles, focusing on urban projects. She is also a talented artist. When Keith and Loren married they lived in Highland Park near downtown until 2005 when Loren sold her firm and they moved to Southern Illinois. They live on a 75-acre farm in the Ozarks and the Shawnee National Forest.