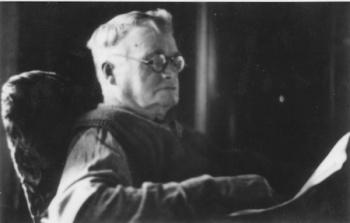 HIGGINS, Lucien Manley (1867-1937), Illinois-born son of Phineas C. Higgins. Lucien Higgins lived in Carpinteria where he owned a machine shop. He was known locally as a mechanical genius. He owned, built and/or ran a number of various pleasure boats, including:

On one trip to Santa Cruz Island in the Dolphin, the engine burned a bearing going across the channel. Higgins limped in to Ladys Harbor, took apart the engine, went to Fry's Harbor where he was able to borrow tools, poured a new bearing, then fixed Dolphin's engine.

Higgins was also engineer/machinist of the schooner Santa Cruz before Red Craine became captain. Crossing the channel at night in the fog, as the vessel got closer to the island, the engine was turned off to listed for the shore surf sounds. By compass they were close to Prisoners' Harbor hopefully. They'd restart the engine, go a little further, and shut down again until they found their harbor.

Lucien married Clara A. Laughlin on December 18, 1901. Although she died in childbirth, their daughter, Clara, lived. Higgins married a second time to Callie May “Mamie” Bruffet of Ohio. She was nurse who took care of his first wife, Clara. They had three children:

Lucien Manly Higgins died on August 26, 1937 and is buried in Santa Barbara Cemetery.

Note: In Carpinteria, three Higgins girls (Elva, Mona + Jenny Higgins) married three Catlin boys: Jim, John, + Charles). The two families were acquainted in Galesburg, Illinois. The Catlins moved to Montana to a big cattle ranch, and the Higgins moved to Carpinteria. Later on, one of the Catlin boys came to Carpinteria to visit the Higgins family. He told his brothers that there were three nice girls in this valley, and "why don't you come on out?"

July 10, 1901 [SBDI]: “…The Higgins launch, when within three miles of the island broke its engine and was thus left to the mercy of the sea. It drifted down to the north side of Anacapa Island, and about dark Captain Higgins decided to row to Ventura, and after rowing all night succeeded in making a landing shortly after 9 o’clock this morning. With Mr. Higgins were Miss Laughlin and Ralph Hayward, a son of C. W. Hayward, the furniture man. When they reached Ventura they were completely exhausted and had not had any food or drink since yesterday morning…”

July 10, 1901 [SBDI]: “Captain Lucien Higgins, Miss Clara Laughlin and Alfred Hayward, who had a rough experience in an open gasoline launch, and who landed at Ventura after drifting in the channel in a heavy sea for 36 hours, arrived here last evening… Early in the afternoon when the sea was at its highest, the steamer Santa Cruz passed about a quarter of a mile away, and every effort was made to attract her attention, but she failed to hear them or see their signals…”

August 11, 1900 [SBMP]: “Mr. Higgins of Carpinteria, while out in his launch Bumblebee off the Sexton Ranch at Goleta, caught 57 barracuda and yellowtail. This beats the sailboat record of the season.”

July 14, 1901 [SBMP]: “The launch Chispa will cross the channel this morning with Henry Short at the helm, and R. Tollman, Alfred Hayward, Lucien Higgins, and Miss Laughlin as passengers.” [Higgins first wife was Miss Laughlin].

July 9, 1901 [SBMP]: “The launches Bumblebee and Chispa, towing the yacht Ariel, left port yesterday morning for the islands with a party of 20 people. Messrs. Short and Higgins were in charge. They will be absent several days and paint the boats.”

July 10, 1901 [LAT]: “Santa Barbara. This city was plunged for half a day in the darkest gloom, pending word from a party of pleasure-seekers who left here yesterday morning for Santa Cruz Island, and who were reported lost at sea… The Chispa, a 30-foot whaleboat with an engine, carried nine persons. She was followed closely by the Ariel, a sloop yacht, with ten aboard. The launch Bumblebee followed… The Bumblebee belongs to Lucien Higgins of Carpinteria. She carried Mr. Higgins, Miss Clara Laughlin and Albert Hayward…”

April 19, 1903 [SBMP]: “Friends of Henry Short are exercised concerning his continued absence from the city. Mr. Short left Sunday night, a week ago, in his gasoline launch Chispa for Santa Cruz Island on a fishing trip, and intended to return Monday. He took with him provisions for a short time only. Since then there has been no news of him. The rough weather of the past week has made communication with the island very irregular, and the few island vessels that have returned brought no word of Short. Yesterday the anxiety became so intense that his friend, Lucien Higgins, started for the islands with the Big Loafer to make a search for him. It is not improbable that Short may be at the islands waiting for a lull in the weather. He may have reached the island in safety and have gone to one of the ranch houses for food and shelter during the storm.”

May 30, 1907 [SBMP]: “Captain G. W. Gourley brought his new fishing and pleasure launch, the Vamoose, to port yesterday from Catalina where the vessel was recently launched from the Mathewson shipyards. Captain Gourley was accompanied on his trip by Lucien Higgins of this city…”

June 16, 1907 [SBMP]: “The power launch Mystery was taken over to the islands last night on a builders’ trial trip. Those who composed the party were Don Leach, commander; Lucien Higgins, Ike Johnson, Ross Drake, William McKenzie and Guilford Kimberly.”

August 17, 1907 [SBMP]: “Lucien Higgins is getting up a party to go to the island next Sunday in the launch Charm. Captain Henry Short returned last night in the Charm, bringing over George Voorhees and a party of fourteen.”