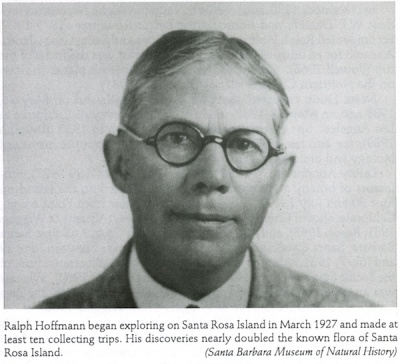 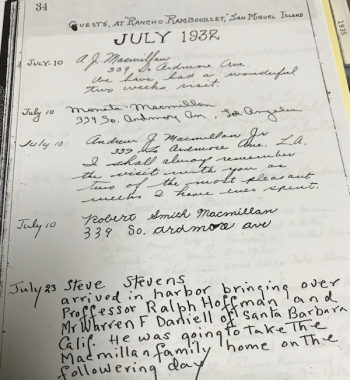 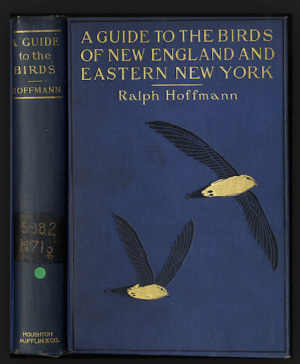 HOFFMANN, Ralph Arthur (1870-1932), Massachusetts-born Harvard graduate of the class of 1890, ornithologist, and botanist. Hoffmann moved to Santa Barbara in 1919 where he served as director of the Santa Barbara Museum of Natural History from 1923 until his accidental death on July 21, 1932 at age 61 on San Miguel Island where he fell from a cliff east of Cuyler’s Harbor attempting to collect a plant.

From April to August 1923, Jose Maria Gallegos, representative of Mexico's federal Department of Agriculture, and also of its Office of Biological Studies; Laurence Huey and Carroll Scott, both with the San Diego Natural History Museum; and Ralph Hoffmann, of the Santa Barbara Museum of Natural History, travelled through the Coronados Islands, regions of the Colorado River Delta inside Mexico, Laguna Hanson and Guadalupe Island. [Curry, Helen et al. Worlds of Natural History (2018)].

The April 1933 Leaflet noted “Under [Hoffmann], the museum grew from a repository of eggs for the study of experts, to a place of importance with many beautiful exhibits in the different fields of natural history.” Hoffmann wrote of his dozens of Channel Islands collecting trips in the Santa Barbara Museum of Natural History Leaflets “One of the objects of the botanical exploration of the islands is to collect data which will help account for the origin of the island forms.”

The California Academy of Sciences wrote Hoffmann a letter:

“We have received almost 400 specimens of your collecting, chiefly from the Santa Barbara Islands. We regard your additions to our herbarium among the most valuable that we have received, since island floras are especially interesting from an evolutionary standpoint.” [Leaflet June 1933].

Hoffmann invited his former student and later renowned author, Austin Tappan Wright, to accompany him on a collecting trip to Santa Rosa Island in 1930.

On July 23, 1932, Hoffmann traveled to San Miguel Island with his friends W. F. Daniell of Montecito, and James McMillan of Los Angeles, aboard Ruby A, owned by Captain Irwin Stevens. Later that same day, Hoffmann met a tragic accidental death while attempting to collect a plant on a steep cliff, about two miles from Cuyler's Harbor. His body was discovered by Herbert Lester, and returned to Santa Barbara aboard the Ruby A. Among plants named for Ralph Hoffmann are Arabis hoffmannii and Sanicula hoffmannii. Hoffmann Point on San Miguel Island is named in his honor.

Hoffmann married his wife, Eliza Gertrude Wesselhoeft, in 1894. They had three children:

January 1920: “In January of this year I picked up in a field at Santa Cruz Island, California, a pellet presumably ejected by a Raven (Corvus corax sinuatus). The pellet was three inches long with a diameter of one inch. It was examined by Mr. H. C. Bryant, of the California Fish and Game Commission, who writes: ‘Without pulling the pellet to pieces, I discovered the following elements: parts of two Camel crickets (Stenopalmatus sp.); parts of grasshoppers; 20 seeds of Poison Oak (Rhus diversiloba); hulls of Wild Oats (Avena fatua).’…” Ralph Hoffmann. Auk 37:3 (453-454), July 1920.

January 26, 1920 [SCICo]: “The schooner left for Santa Barbara 8:50 A.M. Tues. Jan 20 and returned at 2 P.M. Thursday Jan 22 bringing Mr. Ralph Hoffman to study birds and our laborer, a new man who has never worked here before. Mr. Hoffman has so far discovered several kinds of birds never reported on the island before. I granted him permission to shoot two specimens of linnets to take to the museum at Los Angeles.”

September 1-3, 1928 the Nature Club of Southern California, led by Ralph Hoffmann, took a field trip to Santa Cruz Island. As reported in the Santa Barbara Museum of Natural History Leaflet October 1928, during this trip, Robert Canterbury (1902-1979), gardener at the Blaksley Garden, “armed with shovel and gunnysacks, scoured the canyons and chaparral slopes for roots and seeds to add to the Island Group in the Garden.” He was helped by Theodore Payne who was “filling paper bags with seeds of Eriogonum arborescens, a shrub particular to the islands.

July 23, 1932 [NSJRN]: “Naturalist killed as he hunts relic. Santa Barbara. Ralph Hoffmann, 62, [61] director of the Santa Barbara natural history museum and widely known as an ornithologist, was killed today in a fall down the side of a cliff on San Miguel Island… Hoffmann was hunting scientific specimens, using a trowel to scale the steep cliffs. The handle broke, hurtling the scientist onto sharp rocks below.”

July 23, 1932 [Bakersfield Californian]: “Noted Ornithologist Loses Life By Fall. Santa Barbara, July 23.—Ralph Hoffman [sic], 62 [61], widely known ornithologist and director of the Santa Barbara National [sic] History Museum, was killed yesterday on San Miguel Island when he fell down a cliff on which he had been hunting specimens. Hoffman was using a trowel to scale the cliff. The handle broke and he fell upon sharp rocks below. San Miguel Island is one of the Santa Barbara group 25 miles off shore. For many years Hoffman was headmaster of several private schools abandoning this work for scientific study. Hoffman was a graduate of Harvard and a brother of Bernard Hoffman, wealthy electrical engineer and founder of the community arts movement here. He leaves a widow, a son and two daughters.”

July 24, 1921 [San Bernardino Sun]: “Scientist dies in plunge down cliff. Santa Barbara, July 23.— Ralph Hoffmann, 62 [61] years old, director of the Santa Barbara Natural History Museum and widely known as an ornithologist, was killed yesterday in a fall down the side of a cliff on San Miguel Island, one of the Santa Barbara group 25 miles offshore. Hoffmann was hunting scientific specimens, using a trowel to scale the steep cliff. The handle broke, hurtling the scientist ontop sharp rocks below.”

September 1, 1938 [Hubert L. Voight, unpub. Ms.]: “…One day several years ago the director of the Santa Barbara Museum of Natural History, Ralph Hoffmann, was hunting botanical specimens on the cliffs of the east end of the island and fell to his death at the bottom of the eighty foot precipice. Hoffmann had told [Herbert] Lester that he would return to the ranch house for supper, and, when he did not come, Lester set out to find him. At one o’clock that morning, Lester found the body and transferred it to the boat in which Hoffmann came to the island…”

Hoffmann Point, San Miguel Island is to the east of Curler's Harbor. It is the location where Ralph Hoffmann, director of the Santa Barbara Museum of Natural History, fell to his death in 1932.

Deadman's Rock, San Miguel Island, according to Elizabeth Lester, is also a designation for Hoffmann Point where Ralph Hoffmann fell to his death in 1932. [Lester: 41].