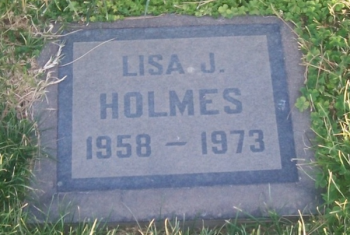 HOLMES, Lisa J. (1958-1973), teenager who drowned while scuba diving with her father near the Isthmus.

May 27, 1973 [Independent Press Telegram, Long Beach]: “Diving girl, 15, drowns despite father's assist. A 15-year-old Las Vegas girl has drowned while skin diving with her father near Catalina Island, authorities said Saturday. The victim, Lisa J. Holmes, was scuba diving with her father, John L. Holmes, in approximately 90 feet of water at Blue Caverns Friday afternoon about a half-mile east of the Isthmus when a six-foot hammerhead shark swam into the area, officers said. Holmes told police his daughter signaled him that she was out of air, so he gave her his tank and immediately surfaced. When she failed to surface he dove again to find her on the bottom. She was transported to Avalon Hospital where she was dead on arrival at 6:10 p.m. She did not appear to have been attacked by the shark police said.”