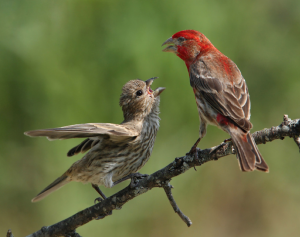 1897 San Clemente Island: “Carpodacus mexicanus frontalis—House Finch. The most abundant bird of San Clemente Island. Common everywhere, but most numerous in the deep gorges, whose walls are broken by dark caverns and festooned with cactus. In such places, especially in the vicinity of the water "tanks", the linnets fairly swarmed, and their full rollicking songs reverberated incessantly. Their food appeared to be mainly composed of the fleshy cactus fruits, of which there was certainly an abundant supply. The nests are built either in cactus, or in niches in the roofs and walls of the caverns. In the latter places the nests vary much in bulk, being fitted to the cavities in which they are built. A large cavity is nearly filled with a mass of fine grasses, weed stems and wool, with only a narrow aperture left at the top. Nests in cactus are built in the center of a clump of spiny stems, from one to three feet above the ground. These can seldom be reached except by breaking down the cactus. They are more compact than those in the rocks, but made of the same materials. Two to five eggs form a full set. They are similar to those of the mainland bird except in size, being decidedly larger. A fresh set taken March 30, measure, .84 x .60, .80 x .63, .82 x .62, .80 x .63. A partially incubated set of five, taken March 31, measure, .80 x .56, .80 x .59, .82 x .57, .85 x .57, .85 x .56, .86 x .58. The nesting season begins early, as nearly-fledged young were noted on March 28. On June 5, incubated eggs were taken. The House Finches on San Clemente Island average larger and brighter colored than those of the mainland. This case well illustrates the tendency of the insular birds to acquire larger proportions of the bill or feet. In this genus, the extremes are reached further south in C. mcgregori and C. amplus. The following are the average measurements of the bills of a series each of the San Clemente and Mainland House Finches:

Forty seven specimens of House Finch were obtained on this island...The party consisted of Joseph Grinnell, who had immediate charge of the expedition, and gave special attention to the ornithology and entomology of the islands; Horace Gaylord, who collected mammals; and Harry Gaylord and James Brittan [Britton] who devoted their time to archaeology. The party left San Pedro harbor May 11 in a large fishing schooner... [returning June 9, 1897]”
Grinnell, Joseph Report on the Birds recorded during a visit to the Islands of Santa Barbara, San Nicolas and San Clemente, in the Spring of 1897 Pasadena Academy of Sciences Publication No. 1, August, 1897 (26 pages).

1907 San Clemente Island: “Carpodacus clementis. San Clemente Linnet. Abundant resident everywhere. Several nests containing incubated sets were found in the sheds at Howlands, March 1. Others were found near Mosquito Harbor, in the cacti and sage. March 9 to April 7 a large series of skins were preserved. The feathers about the base of the bills of several specimens were stained with the juice of the “cactus apple.” This fruit forms the chief food of many island birds during certain seasons.” [“Visits were made to Clemente in January, February, March, April and October, 1907.”]
Linton, C. B. Notes from San Clemente Island The Condor 10:82-86, March 1908

1897 San Nicolas Island: “Carpodacus mexicanus frontalis—House FInch. Only about twenty were seen during our stay on the island, so this bird is by no means common. Fully-fledged juveniles were noted, and a nest found May 25. It was in a hole in the sandstone bluff above the beach but could not be reached. The female was seen to leave it on several occasions. Four specimens of the House Finch were taken...The party consisted of Joseph Grinnell, who had immediate charge of the expedition, and gave special attention to the ornithology and entomology of the islands; Horace Gaylord, who collected mammals; and Harry Gaylord and James Brittan [Britton] who devoted their time to archaeology. The party left San Pedro harbor May 11 in a large fishing schooner... [returning June 9, 1897]”
Grinnell, Joseph The Islands of Santa Barbara, San Nicolas and San Clemente, in the Spring of 1897 Pasadena Academy of Sciences Publication No. 1, August, 1897 (26 pages).

1897 Santa Barbara Island: “Carpodacus mexicanus frontalis—House Finch. Common on the eastern part of the island among the patches of cholla cactus, the fruit of which the linnets were eating. Juveniles were plentiful. A nest was found on the side of a ravine, May 17; it was built between the leaves of a cactus about eighteen inches above the ground, and composed entirely of fine dry grass blades. It contained four badly0-incubated eggs, three of which measure {measurements given]. Fourteen house finches were taken on this island...The party consisted of Joseph Grinnell, who had immediate charge of the expedition, and gave special attention to the ornithology and entomology of the islands; Horace Gaylord, who collected mammals; and Harry Gaylord and James Brittan [Britton] who devoted their time to archaeology. The party left San Pedro harbor May 11 in a large fishing schooner... [returning June 9, 1897]”
Grinnell, Joseph The Islands of Santa Barbara, San Nicolas and San Clemente, in the Spring of 1897 Pasadena Academy of Sciences Publication No. 1, August, 1897 (26 pages).

1905-1906 Santa Catalina Island: “Carpodacus mexicanus clementis. San Clemente I,innet. Abundant in the eucalyptus trees about Avalon and in the cactus patches farther inland where they were nesting. Many partially finished nests and incomplete sets were noted, indicating that the breeding season had just begun. The nest is built on a branch of cactus usually well in toward the center of the patch, and is composed outwardly of weeds and like substances, lined with grass and sheeps ’ wool. A set of four eggs taken are essentially like those of the mainland form.” [“These notes are the result of two brief sojourns on Santa Catalina Island in the month of April, eight days being spent in 1905, and five in 1906. Fortunately both trips were made after wet seasons; the hills were carpeted with grass, flowers and insects were abundant.”]
Richardson, Charles H., Jr. Spring Notes from Santa Catalina Island The Condor 10(2):65-68, March 1908

1898 Santa Cruz Island “... There seemed to be a sort of “draw” at this spot and the wind howled most of the time night and day. The landing was made about four o'clock in the afternoon [Scorpion Harbor] and the first birds seen were House Finches and Rock Wrens (Carpodacus mexicanus frontalis ?) and (Salpinctes obsoletus) quantities of the former, and quite a number of the latter singing most musically from the rocky sides of the gorge... [Main Ranch] House Finches (Carpodacus mexicanus frontalis) were exceedingly numerous in some localities, but with the exception of the flocks congregated about the buildings, were rather shy. Some were nesting in the vines around the house and barns but no completed nest was found by May 1. Mearns description of a House Finch from the Santa Barbara Islands in the Auk (XV, July, 1898) includes some specimens from Santa Cruz Island. This has been acted upon favorably by the A. 0. U. Committee and designated as Carpodacus mexicanus clementis. I took a number of House Finches in different parts of the island but found absolutely nothing that could not be matched in our collection from the mainland or in that of the California Academy of Sciences. Hence, if C. m. clementis is a resident of, or even a migrant to Santa Cruz Island, it must be of rare occurrence there and the C. frontalis which is so much in evidence must migrate in large numbers from the mainland to breed......Following is a list of birds observed during my stay:- House Finch (Carpodacus mexicanus frontalis);...”
Mailliard, Jos., Spring Notes on the Birds of Santa Cruz Island, Cal., April,1898

1907 Santa Cruz Island: “Carpodacus clementis. San Clemente House Finch. Common over most of the island.” [“At 11:30 p.m., November 19, 1907, my father (H. Linton), Mr. George Willett, and myself left San Pedro harbor in a dilapidated fishing smack and in company with a crawfisherman, one “Cold-foot” Jorgensen. We arrived off the south end of Santa Cruz Island at 10:30 the following day during a stiff norwester. For various reasons we were unable to make camp until the 22nd. It may not be amiss to state here that twice during the blow we were nearly wrecked: once while at anchor in Potatoe Harbor, a broken anchor allowing the boat to drift within the breaker line and nearly onto the rocks. In this instance the timely arrival of Willett and H. Linton in a small boat, saved the day, and incidentally the fishing smack. At another time (the engine having broken down) we were blown nearly onto the rocks of Anacapa Island; but with father at the wheel and Willett and I on the “sheet” we managed to hold her off. I mention the foregoing, and the many sleepless nights spent on the rocky shores, “running” the surf several times each day (with attendant duckings), etc., merely as a warning to those who seem inclined to believe a field naturalist’s life “strewn with roses”. (Its ’ generally strewn with cacti!)”]
Linton, C. B. Notes from Santa Cruz Island] The Condor 10(3):124-129, May 1908