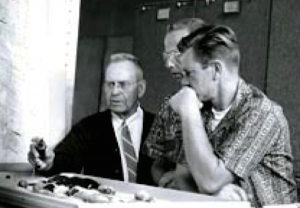 HUEY, Laurence Markham (1892-1963), California-born ornithologist and curator for the Department of Birds and Mammals at the San Diego Museum of Natural History for 38 years, from 1923-1961. Despite the lack of an education beyond the eighth grade, Huey was noted as an energetic collector and photographer, with a life-long interest in natural history. In his early years, he was most influenced by his mentors and friends, Donald Dickey and A. B. Howell. Huey met Dickey on a trip to the Coronados islands, after which he spent ten years working in the field with Dickey. His first trip to Baja California was with Griffing Bancroft Sr. in 1923.

From April to August 1923, Jose Maria Gallegos, representative of Mexico's federal Department of Agriculture, and also of its Office of Biological Studies; Laurence Huey and Carroll Scott, both with the San Diego Natural History Museum; and Ralph Hoffmann, of the Santa Barbara Museum of Natural History, travelled through the Coronados Islands, regions of the Colorado River Delta inside Mexico, Laguna Hanson and Guadalupe Island. [Curry, Helen et al. Worlds of Natural History (2018)].

On December 13, 1925 Huey collected a pair of Gambel quail “from a flock of about 75 birds on the south end of on San Clemente Island.” Upon further investigations, Huey found the quail had been introduced to that island by Charles T. Howland in about 1912, according to correspondence from Howland dated January 29, 1926. Huey published a note about the quail in Condor.

In the summer of 1926 Huey and Smithsonian biologist, Alfred B. Howell. spent two weeks studying whales at the commercial whaling station in Trinidad, California. In all, Huey wrote over 200 scientific papers and named many new forms of birds and mammals from California, Arizona, Utah, and Mexico. His writings include many papers on Mexico’s Guadalupe Island. Shortly before his death, Huey finished his book, The Mammals of Baja California, published by the San Diego Museum of Natural History in 1964.

Huey died at age 70 in San Diego a year after he retired.

HUEY, Laurence Markham. “Born in the Tia Juana Valley, San Diego County, California, September 6, 1892. An active ornithologist, now curator of birds in the San Diego Museum of Natural History, who has devoted his attention especially to the fauna of southern California and the adjacent region of Lower California. He has done considerable field work in this area and has described a number of new subspecies of birds and mammals. In recognition of his activities, Donald R. Dickey has recently named in his honor a southern form of the Poor-will, Phalaenoptilus nuttalli hueyi.”

≫ Digging Their Graves With Their Teeth, by Laurence M. Huey.pdf

April 29, 1925 [Calexico Chronicle]: “On trip through Baja California. San Diego, April 29.—Starting on a scientific collecting expedition into the northern district of Lower California, two representatives of the Natural History museum, Balboa Park, left San Diego Monday morning in two automobile trucks piled high with equipment and supplies to last them 2-1/2 months in the field. They were Laurence M. Huey, curator of birds and mammals on the museum staff, and his aunt and co-worker, Mrs. May Canfield, both of whom have long experience as collectors of natural history specimens. The expedition planned to make its first camp at Santo Domingo, 200 miles south of Tijuana, after which El Rosario, Sierra San Pedro Martir and San Telmo will be visited. A pack train will be required to convey the collectors and their outfit into the San Pedro Martir mountains, but the rest of the trip can be made by automobile. The object of the expedition is to make general faunal survey of the region. Stops at each camp will be long enough to make thorough record of the birds and mammals. Although the northern district of Lower California has been visited by other scientific collectors in the past, their travels have usually been rapid and it is believed that much of scientific importance still remains to be discovered. The present expedition plans to return in the beginning of July after which the results of its findings will be published and the museum's collection, it hoped, enlarged by many new specimens and exhibits. The expedition is made possible by courtesy of the Mexican government, which has issued from the department of agricultura y fomento a special permit for the museum's collectors. Huey is a brother of Malcolm Huey of Calexico.”