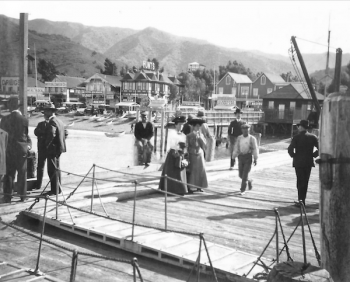 HUNT, William Montague (1870-1947) was involved in a contentious divorce with his first wife, Ella. She accused him of poisoning her in a sensational divorce case.

Hunt and his second wife, Emma Langknecht (1881-1963), married in 1906 in Santa Barbara. They lived on Santa Catalina Island with their five children:

April 1891 [Loud Diary]: “There is a plasterer coming for a two weeks job for Mr. William Hunt.”

June 1, 1893 [Loud Diary]: “At this time William M. Hunt at his Shell Store was the agent for all Los Angeles and San Francisco newspapers.”

November 17, 1902 [LAT]: “Catalina crows as usual are up to mischief. A crow got the golf ball of William Hunt. The bird kept the ball no matter how hard and loud Hunt screeched.”

October 17, 1903 [Loud Diary]: “Mr. William M. Hunt dissolved his firm of Hunt and Clark. Mr. Clark had been with him over 3 years. Mr. Hunt will continue his store begun over 12 years ago.”

February 24, 1904 [Loud Diary]: “William M. Hunt, Jr. now is an associate of his father in the Curio Store on the corner of Crescent Ave. at Sumner Ave.”

December 9, 1905 [SFCall]: “Hunt's wife says he poisoned her. Spouse of Southern California capitalist asks for a divorce. William M. Hunt of Avalon, whose wife, Elle E., says he owns $100,000 worth of realty on Catalina Island, was made the defendant in a suit for divorce yesterday. Mrs. Hunt charges cruelty and her allegations are somewhat sensational. She asserts that he drove her from their home at Avalon and defeated her every effort to return. When they were living together, she says, and she asked him for money for household expenses, he threw the same at her. Finally, she asserts, he forced her take some medicine that poisoned her system, with the result that she was under the care of a physician for several months. But she stood all of this, she says, until he threatened to get rid of her by sending her to the insane asylum and then, fearing that he might carry his threat into execution, she left him. She asks that her husband be compelledhe organist was Wesley Tourtello. to pay her $100 a month alimony.”

October 30, 1947 [The Catalina Islander]: “Avalon's first curio store proprietor dies. Funeral services were held October 21 at the Edwards Brothers Colonial Mortuary in Los Angeles, for Mr. William M. Hunt, Sr., who passed away at his Los Angeles home October 18. Officiating at the service was Dr. Sheldon Shepard and Tourtello. Born in Stockton, California, Mr. Hunt came to Avalon with his parents and opened what is believed to be the first curio store, purchasing the property from Mr. George Shatto at the south corner of Crescent and Sumner avenues. For many years the store was one of the largest of its kind in Southern California, specializing in high grade fishing tackle used in those days by members of the Tuna Club. In the early 30s, Mr. Hunt sold the property to H.D. MacRae, who later sold it to the Cameron Broththers, the present owner being Mr. M.J. Cameron. Mr. Hunt was one of the original stockholders in the Meteor Boat Company, builders of the first glass bottomed power boats to operate in Avalon waters.”