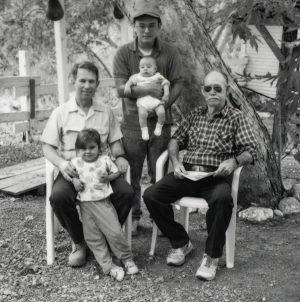 HYDER, Denton Ozias “Buster” (1906-1994), Missouri-born, Buster Hyder grew up tough and poor. His father was hard on him, and Buster worked every day of his life.


In his own words: “I was born in San Pedro, California on May 20, 1906. The doctor says I’m goin’ to live to be over a hundred. When I was 10 years old I went to Santa Barbara Island to live. My dad leased the island for about $50 a year. That ain’t the first island I had been to. I had been to all the islands when I was a little kid. See, I was working with my dad when I was five years old. I was boxing the compass—I was working.”

» LISTEN TO BUSTER HYDER: Participants on the trip included:

March 26, 1938 [LAT]: “Boat Tragedy Survivors Land. Pair Returned to Port by Coast Guard. Survivors of a boating tragedy at San Nicolas Island, George Garvin, 40 years of age, and Denton Heider [Hyder], 31, last night were returned to San Pedro by Coast Guard Cutter No. 254. They escaped from the fishing boat Nora II when it capsized in the heavy swells off San Nicolas Island Thursday, as they sought to take off Mr. and Mrs. Roy Agee to return them to Los Angeles. Alvin Heider, of 623 Twenty-third street, San Pedro, owner of the vessel, is believed to have drowned. Coast Guard planes searched the area for his body.”