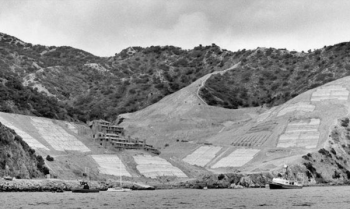 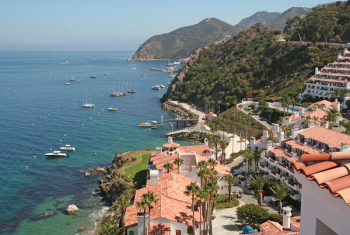 Hamilton Beach [Cove], Santa Catalina Island is located at the mouth of Hamilton Canyon, and lies to the west of Avalon and Descanso Beach. Today it houses a guarded and gated community of hillside condominiums. Historically it was the location of the Amphibian Airport, where seaplanes landed to deliver mail and newspapers. A circular turntable repositioned landed planes for takeoff on the ocean.

A desalination plant was built as a requirement of the Hamilton Cove development. It can provide nearly 85 acre feet of water per year, according to SCE’s filings with the CPUC. An acre-foot is a volume of water 1 foot deep spread over 1 acre, or 325,851 gallons. The development has a tennis club, beach club, pool, picnic facilities and a small beach cove with excellent snorkeling. Boat moorage is available just offshore.

June 25, 1896 [LAH]: “... Another funny thing happened when Louis, the boatman, tried to land the wife of the captain on Hamilton Beach, about a mile from Avalon. He was chased by the company's powerful yacht, Linda, but succeeded in landing the lady in an inaccessible spot which prevented her from reaching Avalon. When the boat entered the harbor a man with a gun stood in the bow and things looked very warlike for awhile. Everything is now very quiet and in all probability today's affair will not be repeated.”

August 8, 1897 [LAH]: “Frank Hutchins of Pasadena celebrated his thirteenth anniversary of his wedding day yesterday. With a party of invited guests he went on a picnic to Hamilton's beach. It was quite an impromptu affair, but was greatly enjoyed by all the participants, even if they did go short on dishes.”

August 17, 1901 [LAT/SCat]: “Avalon. A jolly party went to Hamilton Beach yesterday afternoon, where they regaled themselves with watermelons, peanuts and popcorn, and had a good time generally.”