Difference between revisions of "Hermosa" 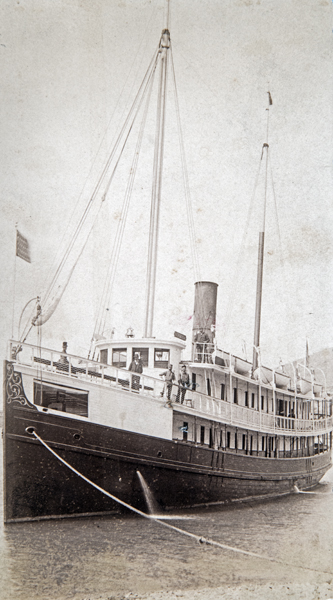 Hermosa (#95992) (1889-1902), 133.5-foot wood-hulled compound steamer built for Captain William Banning to service the tourist trade to Santa Catalina Island. She was built in San Francisco by Hanson & Fraser, and her interior sported Honduran mahogany and birds eye maple paneling. Hermosa made her maiden voyage to Santa Catalina Island on April 28, 1889, the first of many Banning vessels built for their Wilmington Transportation Company, which would service the Catalina Island trade. She carried 150 passengers, and initial round-trip fare was set at $2.75 and included local train fare to get to San Pedro harbor. The one-way trip was just under two hours and was often accompanied by a Hungarian orchestra. During the summer season Hermosa made daily runs, and the rest of the year she made three trips a week. On August 1, 1897, the wife of Hermosa’s Captain Alexander Smith gave birth to their son aboard Hermosa as he was transporting his expectant wife from the island to the mainland. He was named Hermosa and called Hermy.

When Hermosa was dismantled in 1902, many of her appointments were used in Hermosa II. The stripped hull of Hermosa I was then burned during the 4th of July 1902 celebration at Avalon Harbor. Hancock Banning, Jr., remembered: “Hermosa was shorn of its deck house. A wooden derrick was built amidships. All soaked in oil. A powder train on long boat fuse was layed along both sides of hull fore and aft. On the eve of 4th of July the whole thing was set afire in front of Avalon Bay. It was a spectacle to behold, sky rockets, flower pots, etc. etc. etc. going off from the deck. The guys that set it off had long since got out of there. A very brief description of this appears p. 19 of Fred Ayer Jr.’s book Before the Colors Fade, a very intimate story of George Patton, Fred Ayer’s uncle.”

Of the two Hermosas, Hancock Banning Jr. said: “I know it is No. 1 as the [Hermosa] cargo port is in the bow. In No. 2 the cargo port was further aft.”

June 25, 1892 [SPT]: “Saturday evening last the new steamer of the Wilmington Transportation Company, the Hermosa, all ablaze with her electric lights, after taking on board a merry party of excursionists from both the San Pedro and Terminal wharves, started for Catalina Island on pleasure bent, and as they steamed out of the harbor, the band struck up a lively air and made those who were left on the wharves and ‘not in it’ fare lonely for awhile at least that evening. After a lively run over they enjoyed the hospitality of Avalon, and the next day, by invitation of Captain [Wm?] and Judge Joe Banning, they continued the cruise to the Isthmus and other parts of of interest about the island. Catalina Island, under the present management, is becoming a deservedly populated resort and is catching the attention of the traveling and amusement loving public as it never did before.”

August 15, 1893 [LAT/SB]: “…Could we but have a steamer of respectable size, like the Hermosa, hundreds of people would visit the Channel Islands and make Santa Barbara the starting point…”

July 24, 1894 [LAT/SCat]: “The very light passenger traffic on the Hermosa’s return trip from the island is abundant evidence that the large number of people brought over from the mainland have come to stay…”

July 30, 1894 [LAT/SCat]: “The Hermosa brought over the largest number of passengers yesterday afternoon that have been received on any single trip thus far this season…”

July 5, 1898 [LAH]: “Avalon, July 3. — Amid the hiss of rockets and the glare of Roman candles the steamer Hermosa was received on her first trip to the island since she was put on the Alaska run. The steamer brought over nearly 200 excursionists, and as soon as she entered the bay, from the top of Sugarloaf a rocket shot up, and was answered from the boat, and at the same time a number of bonfires and pans of red fire were lighted along the shore. As soon as the boat made fast to the wharf the people began to disembark and make for the hotels to secure their quarters, and the streets of Avalon presented the liveliest scene of the season...”

August 28, 1895 [LAT/SB]: “It is reported here that Justinian Caire has about consummated arrangements with the Banning brothers of Catalina whereby the latter will run their steamer Hermosa to Santa Cruz Island as soon as Mr. Caire completes the erection of his new hotel.”

August 26, 1896 [LAT/SCat]: “Defender, Jr., model of the famous winner of the international cup races, had a thrilling experience yesterday, which came near ending her career entirely, as well as that of those on board. Defender, Jr. has been at Avalon for the past month, and early in the week was taken to San Pedro by her owner and builder, Captain C. G. Wedgwood, who returned with her last Sunday… within six or seven miles of San Pedro Harbor a terrific gale struck the craft…but the odds were against her, and a violent gale snapped her mast like a pipe stem, dismantling her canvas. The boat drifted helplessly about till the steamer Hermosa, on her daily trip to the island, sighted her… The Hermosa went to her assistance…”

June 8, 1897 [LAT/SF]: “The steamer Hermosa was coming along at a fair speed in a rather thick fog [twenty miles south of the Golden Gate], when she ran into two whales that were lying close to the surface of the water. One of the whales was cut almost in two, and the water about the vessel was covered with blood. The Hermosa will probably go into the Merchants dry dock for repairs.”

August 24, 1900 [LAT/SCat]: “The whales were on dress parade yesterday. The passengers on the Hermosa sighted more than a dozen of these big cetaceans on the trip over, and the Avalon’s passengers who went over to San Clemente Island yesterday also saw a number spouting near them, one big fellow seemingly more than twice the size of their boat, came up several times within less than a hundred yards of their vessel.”

March 1, 1901 [SBDI]: “Whales in channel. Sporting ground for them about the islands. Whales’ graveyard on Santa Rosa Island. Charles Frederick Holder tells an interesting story in the current number of Scientific American about the running down of whales in the Santa Barbara channel by steamers and points some of the supposed dangers to navigation from collision with the sea monsters… During the summer of 1900 the steamer Hermosa killed a whale off San Pedro, which was at least 80 feet in length…”

April 26, 1901 [LAT/SCat]: “The Japanese divers engaged in cleaning the hull of the steamer Hermosa are the prime attraction at Avalon. The pier is constantly lined with a curious crowd watching the line of bubbles which indicates the location of the diver, and scrambling for the barnacle shells which are occasionally thrown up.”