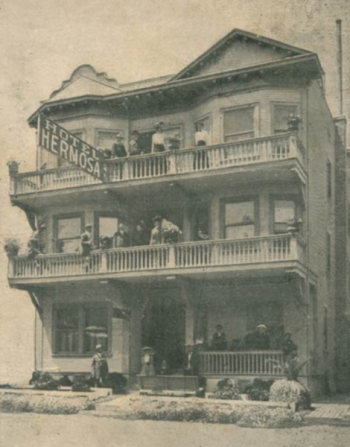 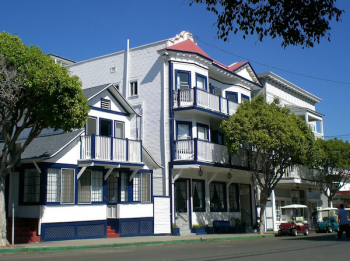 Hermosa Hotel, Santa Catalina Island was built in 1896 by Hungarian immigrant, Benjamin Rosin (1860-1935). Originally operated by the Rosin family, the historic Hermosa Hotel is a part of Catalina History. It offers visitors a glimpse into the island’s past and is one of the few hotels that survived the 1915 fire. They once used the slogan “I Survived the Hermosa Hotel”. They also once sold on t-shirts advertising “Sleep Cheap Catalina.”

April 24, 1917 [TI/Avalon]: “Featuring William Farnum in When Men See Red, a company of the Fox Film Company is expected here Thursday, to remain for several days at the Hotel Hermosa. Under the directorship of Frank Lloyd, a number of local scenes will be taken. The film promises to be one of the best yet produced by the Fox Company. Louis H. Sherer was here Monday to make the preliminary arrangements.”