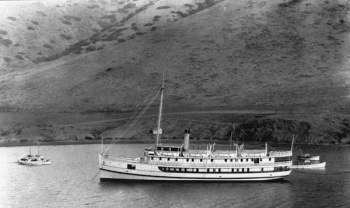 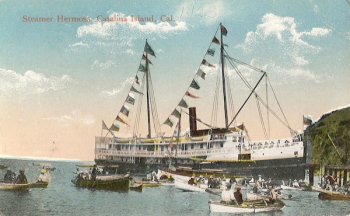 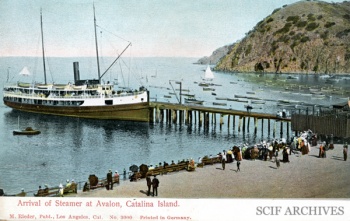 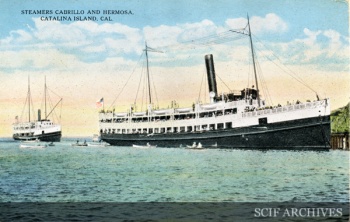 Hermosa II (#96611) (1902-1935), 139-foot wood-hulled compound steamer built by William Muller at the Mormon Island Shipyard for the Wilmington Transportation Company’s expanding tourist trade to Santa Catalina Island. Hermosa II went into service on July 1, 1902, and carried 700 passengers. Hermosa II had a long and successful career until 1928 when she was sold and converted to a tuna clipper. At that time, her house, with original mahogany paneling from Hermosa I, was removed and used as the merchant mariner’s labor hall in Long Beach until that too was salvaged. Hermosa II was burned at sea in Costa Rica in 1935. Some of the original paneling is installed in the Santa Barbara Maritime Museum.

June 20, 1902 [LAT/SCat]: “Avalon is to be strictly in it this summer so far as transportation is concerned. The island company announces that the new Hermosa will make her initial trip on Saturday next, and on and after that day there will be four boats to the island every Saturday. They will arrive at 11:30 A.M., 12:45, 5:30 and 8:45 P.M. On Sundays there will be two boats arriving here, at 12:45 and 5:30 P.M. Preparations are being made for a grand celebration of the event of the new Hermosa’s arrival, and there will be a ‘hot time in the old town’ Saturday night.”

July 3, 1904 [LAT/SP]: “With many pennants floating in the breeze, the flag of General Phineas Banning at her masthead, the Cabrillo, the finest and fastest steamer of the Banning Fleet, steamed proudly up the inner harbor at 10 o’clock this morning, while half the town cheered her arrival and all the other craft in the harbor gave her noisy welcome… The new steamer will make her initial trip to Avalon on July 4. She will be under the command of Captain Evan Trefethen, who has been for many years in the employ of the Banning Company and who is now the master of the steamer Hermosa…”

August 2, 1904 [LAT/SCat]: “Avalon. The Hermosa varied her usual Isthmus trip on Sundays by going around the island. A large crowd, estimated at over 500, took advantage of the opportunity.”

August 23, 1904 [LAT/SCat]: “Avalon. When the steamer Hermosa was making a landing here yesterday, by some slip the stern of the vessel swung around into the lines of boats, and before the machinery was stopped two of E. M. Mathson’s fine skiffs were reduced to kindling wood and two others swamped.”

September 4, 1904 [LAT/SCat]: “Avalon. Today promises to surpass any other of the season in number of visitors. The Cabrillo on her first trip over this morning brought 850 passengers. The Hermosa likewise had a big list, and the Cabrillo still has two more trips to make before the record is closed…”

September 5, 1904 [LAT/SCat]: “Avalon. The Hermosa made the trip around the island again today, carrying a goodly crowd.”

September 13, 1904 [LAT/SCat]: “Avalon. Recent travel to this resort has broken the record for largness of volume… This morning the hegira this way set in early and a special boat, the Warrior, brought a party of 176 people for breakfast at 9 o’clock. At 11:15 the Cabrillo landed 900, and at 12:45 the Hermosa steamed in with 250 more…”

February 3, 1914 [TI/Avalon]: “The Hermosa will be dry-docked and thoroughly overhauled for the coming season’s traffic.”

September 15, 1914 [TI/Avalon]: “The steamer Hermosa started on the cross-channel trip Monday, and will remain on the route until business warrants a change. Leaving time will be 3:15 P.M.”

November 30, 1915 [SBMP]: “The steamer Hermosa arrived at San Pedro Harbor shortly before noon with guests from one of the hotels destroyed [by fire] at Avalon…”

May 23, 1916 [TI/Avalon]: “A flying fish weighing almost two pounds sailed into the social hall of the S. S. Hermosa Sunday as the vessel was crossing the channel. With a dull thud the fish struck the piano and then immediately became the center of admiration of many passengers who had never seen a flying fish as close quarters.”

May 30, 1916 [TI/Avalon]: “Each day the steamer Hermosa brings large quantities of furniture and household supplies for those who are opening apartment houses and furnished cottages.”