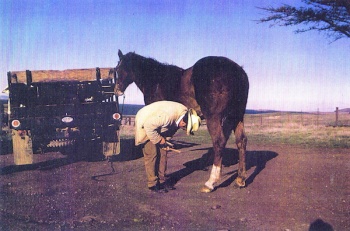 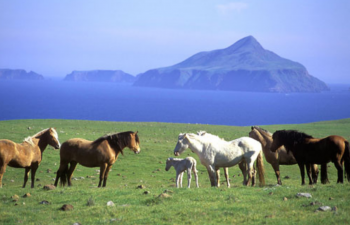 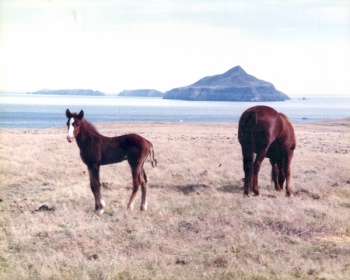 Horses have been a part of the cultural landscape of the Channel Islands since the mid 19th century. They are first recorded as having been introduced to Santa Cruz Island in 1830. Horses today are found only on Santa Rosa and Santa Catalina islands.

Horses were first recorded as having been introduced to Santa Cruz Island in March 1830. Angustias de la Guerra Ord recounted in her memoirs, Occurrences in Hispanic California:

“Don Romauldo Pacheco thought of sending them [convicts] to one of the islands and did so with the greater part of them [to Prisoners’ Harbor, Santa Cruz Island]... He first provided seed for sowing and some animals such as cattle and a few horses... Those on the island, after being there some time, lost what they had by fire. We saw the flames from here [Santa Barbara]. A long time passed before succor could be sent to them because the schooner which was used to carry supplies to the island had not arrived. The convicts made some rafts and came here on them. Some landed at Carpinteria or the Rincon and were taken and confined in the guardhouse. Corporal punishment was ordered inflicted by rods or lashes- two or three were very badly treated. Later the Comandante was obliged to send for the rest. They all came to Santa Barbara and complaint was never made of them. Some were sent to Monterey.”

As ranching interests were developed on the island by James B. Shaw, and later by the Santa Cruz Island Company (1869) under the direction of Justinian Caire. Horses were the mode of island transportation from about the mid-19th century into the 20th century — until the advent of motor vehicles. Horse-drawn wagons hauled supplies between island ranches; they were used to haul hay grown on the west end of the island. As roads were developed, wagons were eventually phased out in favor of vehicles in the 20th century.

Justinian Caire died in 1897. As a result of inter-family Caire litigation which had begun in 1912, in 1920 surveyor, Santa Barbara County surveyor, Frank Flournoy, was appointed, by court order of Judge Crow, to survey Santa Cruz Island in order to settle the dispute among the Caire family. H. J. Doulton and George W. McComber assisted Flournoy in this Herculean task which was finished at the end of 1924. The survey resulted in a partition of Santa Cruz Island into seven parcels. Two parcels created on the east end of the island were awarded to two of Caire's six children; five parcels — the western 9/10ths of the island — were awarded to Caire's widow and four of his children. From that time forward, land, assets and livestock were divided with no contact or interchange between the two parcels on the east end of the island and the western five parcels.

A buckskin stallion was introduced to the the eastern end of Santa Cruz Island in the late 1970s by David Petersen. After a number of years, into the early 1980s, with the birth of numerous fillies and colts, he was taken back to the mainland. The horses roamed free and bred among themselves for several decades. When the Owens family moved to the East End of the island, the horses were culled by shooting to reduce their numbers.

[March 1830] Horses were first recorded as having been introduced to Santa Cruz Island in March 1830. Angustias de la Guerra Ord recounted in her memoirs, Occurrences in Hispanic California:

“Don Romauldo Pacheco thought of sending them [convicts] to one of the islands and did so with the greater part of them [to Prisoners’ Harbor, Santa Cruz Island]... He first provided seed for sowing and some animals such as cattle and a few horses... [Angustias de la Guerra Ord. Occurrences in Hispanic California. Academy of American Franciscan History (1956) ]

[1851]: “I [James B. Shaw] have paid the taxes on [Santa Cruz Island] since 1851, and have placed cattle and horses and sheep on it; built houses and made canals and cut roads on it.” Island of Santa Cruz, Andres Castillero vs. The United States; Testimony of James B. Shaw, 1857.

November 22, 1873 [SBSWT]: “The schooner Star of Freedom sailed yesterday for Santa Cruz Island. She had on board five saddle horses for parties on the island.”

February 5, 1874 [LAH]: “The Santa Cruz Island Company was organized in 1869, having been incorporated under State authority, with half a million dollars’ capital, for carrying on the business of sheep-husbandry, stock-raising, etc. The island of Santa Cruz, one of the Santa Barbara group, was purchased by the company as a field of operations… There are now running at liberty over the island, flocks of Spanish Merino sheep, numbering between 40,000 and 45,000 head, worth, according to the season of the year — that is to say, with or without wool on — from $2 to $3.50 each, and representing an aggregate value of $150,000. Besides these immense flocks there is a stud of about 125 saddle and draft horses and mules, some breeding mares with colts, and a fine stallion of the Morgan stock, representing a value of $10,000 to $12,000; about thirty head of fine tame Devon cattle, including bull, milk cows and their increase for the use of the island, valued altogether at about $1,200 or $1,500; and finally, perhaps, 150 head of cattle running wild in the valleys and over the mountains, and affording, whenever desired, an extra supply of fresh beef for the use of the permanent residents on the island…”

August 27, 1877 [BowersFN]: “Santa Cruz Island. Mr. J. B. Joyaux, superintendent of this island, met us and offered me horses to explore the island… I procured a guide from Joyaux at $1.25 per day. The wisdom of securing a good guide was apparent every mile of the way.”

June 11, 1881 [SBDP]: “The schooner Star of Freedom yesterday brought over from Santa Cruz Island a number of horses for Nick Covarrubias.”

June 20, 1881 [SBDP]: “The schooner Star of Freedom, Captain Burtis, came over from Santa Cruz Island Saturday night with sheep for I. K. Fisher, and several horses for Nick Covarrubias.”

June 25, 1881 [SBDP]: “The schooner Star of Freedom, Captain Burtis, sailed for Santa Cruz Island this morning. She took over a number of work horses.”

April 1, 1892 [LAT/SB]: “The schooner Star of Freedom came over yesterday from Santa Cruz Island on Wednesday evening, bringing some horses. They were landed by swimming them ashore yesterday morning.”

May 9, 1892 [LAT/SB]: “The schooner Star of Freedom came in from the islands Friday evening, bringing two mules and a couple of cows, landing them in the surf.”

April 6, 1893 [LAT]: “The schooner Star of Freedom came in from Santa Cruz Island Tuesday morning and landed several horses, tumbling them overboard and running them ashore through the surf.”

May 30, 1893 [SBMP]: “The schooner Star of Freedom arrived in the harbor Sunday and sailed again yesterday for the island. She carried two horses to be used on the island.”

October 24, 1894 [SBMP]: “The schooner Santa Cruz brought some horses from the island yesterday for ‘Nesimos Covarrubias. A small crown gathered to watch them unload.”

October 24, 1894 [SBDI]: “The schooner Santa Cruz arrived yesterday from Santa Cruz Island with several horses. A large number of people gathered to see them unloaded, which was done by throwing them overboard and making them swim ashore.”

October 7, 1905 [SBMP]: “The steamer Pasadena put into port late yesterday afternoon and took on a cargo of stock, mostly horses, consigned to Santa Cruz Island. The Pasadena came south a few days ago from Eureka with a cargo of lumber for San Pedro, and is now on her return trip to the northern port. She has carried other cargoes for the Santa Cruz Island Company. After unloading the stock at Prisoners’ Harbor, she will sail on north without returning to this port.”

January 15, 1907 [SBMP]: “Channel Island of Santa Cruz a place of rare beauty…Over this rocky road the Italians come and go on horseback or afoot; in a gig starting their horses at the ranch house and never allowing him to walk until the journey’s end. A remarkable sort of driving, and one which the inland voyager is not soon to forget, and of which he can give no adequate description…It really seemed I touched the seat three times from the beach to the minute the boy pulled up the horse on his haunches and cried, ‘whoa!”

June 28, 1915 [SBDNI]: “George Knapp and a party of friends have gone on the Sea Wolf for the islands. They took with them supplies for pack horses and will camp in the mountains using island horses for packs.”

June 29, 1915 [SBDNI]: “After passing a week on Santa Cruz Island, George Owen Knapp and party of Montecito, returned to this city today in the Sea Wolf owned by Captain I. K. Eaton. The party enjoyed mountain climbing on the island, and rode the Caire ranch horses, making their headquarters at the big ranch, as guests of the family.”

[1922 Symes Report]: “There is a total of 97 head of horses including colts, a Percheron stallion, and an island-raised saddle stallion on the island. Approximately two thirds of these are saddle stock, a considerable number being needed in corrida work, the balance are work stock. The work horses are of good size and condition and are generally well adapted to the island work. The saddle horses are mostly from Arizona stock, generally small but wiry and well adapted to the work for which they are used. About twenty head are of but little service due to age or injuries. There are a few Shetland ponies.” 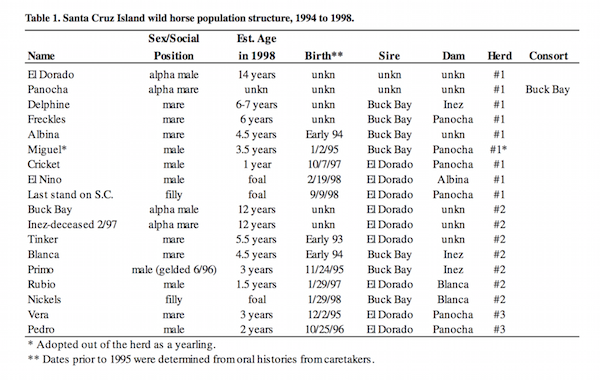 » Krist, John. Wild beauty: What will become of the wild horses on Santa Cruz Island? in Santa Barbara Magazine Spring, 1997;

August 18, 2016 [krctv.com/news]: “LOS MOLINOS, Calif. - Christina Nooner is prepared to say goodbye to Sunshine, one of 13 Santa Cruz Island horses she and her husband Troy continue to take care of at their ranch in Los Molinos. Over the last two decades, the Nooners say they've "rescued and bred more than four dozen Santa Cruz island horses" at their Sunshine Sanctuary. DNA testing indicates the Santa Cruz horses are of Liberian origin and are officially recognized as Colonial Spanish. The few that remain are because of the work and love provided by the Nooners, who are now hoping breeders will come forward to purchase the horses and continue the breeding process. "I've been taking care of them and feeding them for quite some time and got pretty attached to them," said Troy Nooner, 61. "But it's time for [these horses] to move on." These horses are special to the future generation," said Christina Nooner. "They must survive for future generations." Until two years ago the sanctuary welcomed children free of charge to ride, play and just visit the horses, which the couple says have an uncanny ability to connect with children, especially those going through difficult times. "They're just a lot more intuitive than other horses," said Christina. "And they're a lot calmer. If a breeder is interested in purchasing one or more the horses, they can contact the sanctuary at sunshinesanctuary@yahoo.com.”