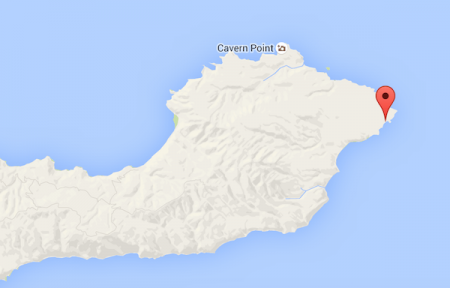 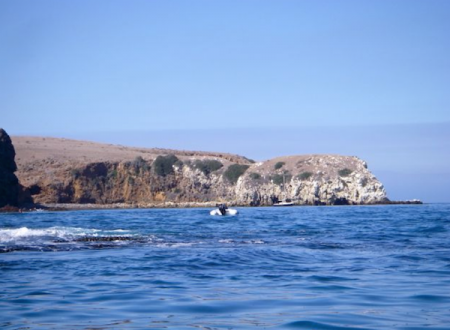 Francis Gherini recalled: “At Hungryman's Gulch (near Pedro Point) there was a fisherman named Sam Higeras. All these fishermen lived alone except Sam. He had an African-American lady friend with him.”

Recreational diver Andy Gordon (1957-1985) drowned in a SCUBA diving accident just offshore from Hungryman’s Gulch on August 26, 1985. His death remains a mystery as he had air left in his tanks.

October 20, 1917 [SBDN]: “Youth drowned in windswept ocean. Launch Marguerite founders off Anacapa and Bryan Schafer is lost. Bryan Schafer, 20 years old, a native of Santa Barbara, was drowned Wednesday morning when a fishing boat, the launch Marguerite, foundered off Anacapa Island, during the terrific windstorm that swept the ocean and sections of the mainland. Schafer’s companion, Jack Carrillo, owner of the boat, saved his life only after a hard battle with the sea, when he swam for seven hours, finally reaching Hungry Man’s Harbor on Santa Cruz Island, seven miles distant from the scene of the disaster. Jack Carrillo reached home late last night, and this morning broke the news to the bereaved mother of the drowned boy, Mrs. Minnie Schafer, who lives at 417 Santa Barbara Street. How young Carrillo lived through the thrilling battle with the sea he does not know. His face, hands and body bear the gashes and bruises that mutely testify to the hard fight and frightening ordeal through which he went. At the home of his parents, Mr. and Mrs. H. L. Morrow, at 121 Anacapa Street, the young fisherman told the story of his remarkable experience… ‘So I swam on. At first I thought I wanted to die too, but almost without thinking I swam and swam, and for three hours or more I fought with the storm and sea. I could not go back to Anacapa, for the storm was driving me toward Santa Cruz Island. Finally after nine hours or more since the boat sank under us, I pulled myself up on the rocks of Hungry Man’s Harbor. I could hardly put one hand before the other, in dragging myself forward. I was picked up time and again by the swells and hurled helpless about, and cannot understand how I escaped being dashed to death on the rocks. Finally I began to call for help. My calls were heard at H. W. Tom’s fishing camp. Mr. Tom fishes for Larco. He came down to the shore and helped me to his camp. There I was given hot coffee and something to eat, and remained with him until the fishing smack Eagle arrived yesterday. On the Eagle I came to town…”

October 21, 1917 [LAT]: “Jack Carrillo, one of the heirs to the De Baker millions, saved his life after seven hours of battling with the sea in a swim of seven miles, after his boat, Marguerite, foundered during the terrific windstorm Thursday. His companion, Bryan Schafer of Santa Barbara, was drowned. The two were out after crawfish. When the storm came up they started to run from their camp on Anacapa Island to Santa Cruz Island for fresh water and ten minutes out their smack was caught by a heavy sea, the rudder smashed and the boat capsized. They swam for a time, clinging to a bundle of laths from the boat, and they reached the craft and for an hour sat on the upturned boat. There Carrillo disrobed, but his companion refused to. Suddenly the boat righted itself and sank. Two scantlings floated from the boat and on these the two youths floated, until Schafer went down. For two hours Carrillo kept his companion’s head above water, and when he finally disappeared Carrillo continued swimming without the aid of the scantling, until exhausted, he reached Hungry Man’s Harbor on Santa Cruz Island, seven miles distant. He was rescued among the rocks of the harbor by fishermen and brought to Santa Barbara today. Bryan Schafer was the son of Henry Schafer, now deceased, who was for years a leader in Democratic politics.”