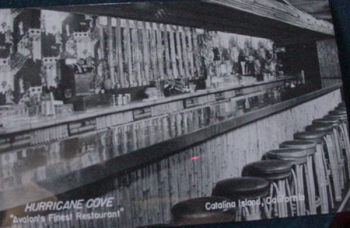 Hurricane Cove, Avalon, Santa Catalina Island was a pre and post-war restaurant and bar (1937-1979), located at 305 Crescent. It once featured a huge semi-circle bamboo piano bar. It was originally owned by Oscar Griffith (1895-1974). David Renton, was the architect for the Wrigley Family and designed the structures on the Island per the Wrigley request, (including the Casino). The Wrigley family did not want any tropical themed structures, but Oscar and the owners of the Waikiki Hotel were able to prevail and had their businesses constructed the way they wanted.

Oscar had a band, Jimmy Lowe and the Sons of Hawaii, who played regularly at his place. Oscar had after hours for top named entertainers that played at the Avalon Casino Ballroom including Benny Goodman. Oscar had the place built per his vision which included a bamboo bar in 1938. He had lights, fans and audio to simulate a hurricane which were activated every hour. Oscar imported an expert in bamboo construction from California.

In 1957, Hurricane Cove was managed by Johnny Piacentini and Vince Scari.

Los Angeles attorney, Don Lake, who had done work for Oscar, Griffith purchased Hurricane Cove and had it remodeled.

More than 40 years after it first opened, Hurricane Cove was destroyed by a fire on March 4, 1979.

August 14, 1947 [TI/Avalon]: “We have a master musical comedian in Avalon. He is ludicrous with oddity. He knows every trick of measuring mirth. Hear him poker-face "Smoke, Smoke, Smoke" and you'll forget your cigarette. I refer to Phil Fahrney, CHuck Butler's band leader at Hurricane Cove, where there's a new lease on pleasure and patronage. I pity these performers who are putrid in their songs and specialties. Their open vulgarity closes their screen, radio and record opportunities. Phil is not one of them—he clicks with the cleaner humor—and that's the big bullion in the end. The Hurricane will be a first spot to vacuum the false show business on our Strip. It will vitiman [sic] it with true showmanship. This will please the majority of our islanders and visitors. Avalon will never top its nite life with bottom entertainment.”

March 5, 1979 [Press-Courier]: “Blaze Hits Island. Avalon — A fire that destroyed two 60-year-old wooden buildings on Santa Catalina Island and left four stores damaged by water and smoke has caused at least $200,000 damage, fire officials said. Avalon Fire Capt. Bill Putnam said no injuries were reported in the Sunday morning blaze, although several people were evacuated. The Hurricane Dove restaurant and bar and the 20-unit Waikiki Hotel were destroyed in the fire, the cause of which was still under investigation.”