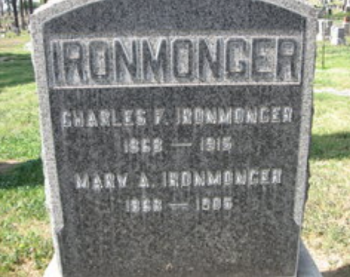 IRONMONGER, Charles Frederick (1868-1915) was born in Ohio. In 1892 when he was in his early twenties, he moved to Los Angeles, where he worked in the studio of Charles Betts Waite (1861-1927). When Waite moved to Mexico, in 1895 Ironmonger set up athe first photography studio in Avalon, on Catalina Island. Here Ironmonger captured images of everything from landscapes to visiting fishermen standing next to their record catches, including:

Ironmonger's photographs were used for postcards as well as to illustrate books. His photos appear in Charles Frederick Holder's Life in the Open: Sport with Rod, Gun, Horse, and Hound in Southern California, 1906.

August 19, 1902 Catherina MacLean Loud notes in her diary: “Charlie Ironmonger and wife were both born on the same day of the same year. They were married last winter.”

October 11, 1903 [LAH]: “Avalon, Oct. 10.—George Gemelier, captain of the launch Mascot, with his wife, and Charles Ironmonger, an Avalon photographer, have gone on a teo weeks' camping expedition around the island. Their first stop will be Johnson's Landing; thence to Catalina Harbor, and the final camp will be at Little Harbor.”

May 20, 1904 [LAH]: “Avalon. Charles Ironmonger and Pete Reyes were in the launch, Alert and the former hauled in two yellowtail and one albacore, while the latter had just fished.”

May 27, 1904 [LAH]: “Avalon, May 25.—Today's jewfish tourney around Catalina Island resolved itself into a shark catching contest. Only one jewfish was taken. Charles Ironmonger was the fortunate fisherman.”

May 28, 1904 [LAT/SCat]: “Avalon. The jewfish tournament yesterday was interfered with by rough water… Charles Ironmonger got a 200-pound jewfish. The fishers, while disappointed in not getting more fish, were compensated in some degree by the grandeur of the scene about Seal and Church Rocks.”

August 3, 1904 [LAH]: “Heroism of two Avalon young men saved the lives of Miss Florence S. Porter and Miss D. E. Anderson, both of Los Angeles, at Catalina Island yesterday. The rescuers, C. F. Ironmonger and P.V. Reyes, are modest about their act of bravery and speak of it with diffidence. The young ladies had left their apartments at the Grand View Hotel for an early morning plunge and as neither can swim a stroke they were satisfied to splash in the water adjoining the bath house pier, when suddenly and without warning Miss Anderson stepped off what is known as a shelf and immediately disappeared in deep water. Miss Porter, thinking her friend was endeavoring to frighten her, did not at first take any notice of the incident, but when Miss Anderson reappeared gasping and waving her arms in a terrified manner Miss Porter became alarmed and stepped forward to aid her friend. Her fate was similar to that of Miss Anderson and instantly the two young women were struggling for their lives in ten feet of water while half a dozen or more early risers stood on the beach and laughed at what they thought were pranks of the two frivolous girls. At this time Reyes and Ironmonger happened along and hearing the unusual commotion in the water, glanced out, and instantly realizing the gravity of the situation, threw off their oats and rushed into the surf. Their arrival was none too soon, for Miss Anderson had gone down for a third time and when brought to the surface was unconscious, while Miss Porter had given up the struggle and was only dimly conscious of what was happening. The rescue was witnessed by several score of persons who had gathered. The limp forms of the women were carried onto the beach by their rescuers, where restoratives were administered.”

August 9, 1904 [LAH]: “Back up record. The authenticity of the world's record catch of black sea bass made one week ago by Dr. L. M. Taylor of Washington, D.C., and Herbert St. A. Earlscliffe of Santa Barbara, a picture of which appeared in Saturday's Herald, has been the cause of much comment and criticism by fishermen throughout the state. So, on the supposition that seeing is believing, Dr. Taylor recently gave an order to Charles F. Ironmonger, a local photographer, to make the biggest enlargement possible of the original photograph of the catch, and Ironmonger has just completed the job, which is said by critics to be a masterpiece of the photographer's skill. The finished picture measures twenty-four by thirty-six inches, and in it can be plainly seen every line and mark on the carcass of the fish, while the likeness of Earlscliffe and Taylor are, according to their own statements, better than the originals. Now, if there happens to remain a 'doubting Thomas,' or a hundred of them for that matter, they are respectfully invited to step up and look at the picture, which will in a few days have a sworn statement signed by a notary attached.”

October 8, 1904 [LAH]: “Avalon. Charles Ironmonger, the island photographer, and George Gennlen, accompanied by their wives, start today on their annual camping trip to Johnson's Landing, beyond the Isthmus.”