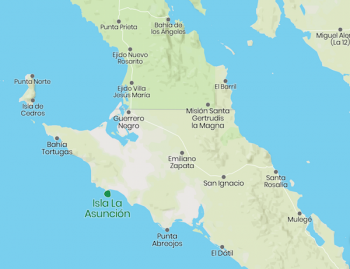 ISLA ASUNCION, BAJA CALIFORNIA, MEXICO lies less than six miles southeast of Isla San Roque and three-quarters of a mile south from Asuncion Point on the mainland, which forms the southeastern limit of San Roque Bay. It is only a mile long north and south and a quarter of a mile wide. Asuncion is a barren island of sandstone formation, the highest point rising abut 165 feet above the sea at its southern end. It has no fresh water. It is frequented by a few species of sea birds, but has no land mammals.