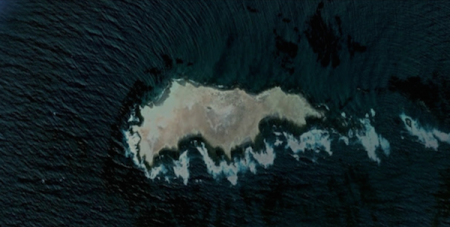 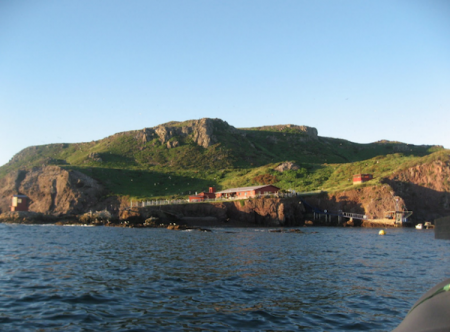 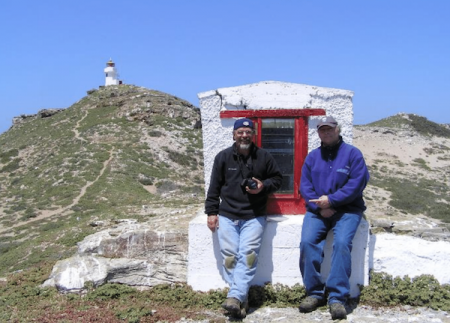 SAN GERONIMO, Baja California, Mexico is a .75-mile-long island that lies near the south side of Rosario Bay, 8.75 miles SSE of Punta Baja, 5.25 miles WNW of San Antonio Point, and 2 miles N of the north edge of the infamous Sacramento Reef. It is one of the smallest islands off the Pacific coast of the Baja Peninsula. This low rocky islet is surrounded by cliffs 10 to 50 feet high, above which the surface forms a plateau sloping to a hill about 130 feet high near the middle and to two smaller hills near the northern side. The island is surrounded by kelp beds and outlying rocks. It has no fresh water. Its only land mammal is the abundant white-footed mouse. Due to the abundance of sea birds, this was well-known historically as a guano island.

Isla San Geronimo has a lighthouse and only 10-12 recorded species of plants. The Island Bush Mallow, Malva pacifica, is one of the significant plants found on the island. The shores are filled with abundant colonies of ground nesting birds, and many pinnipeds. There is a fish camp on the eastern beach of the island.

The Sacramento Reef lies nearby offshore, and is named for the wreck of the passenger steamship with great loss of lives. The reef is 2.5 miles wide, including a detached 18-foot spot, 2 miles long, and runs NW to SE. The northern edge of the reef is 2 miles south of the southern tip of Isla San Geronimo. Its southern edge is 3.2 miles WSW of Cabo San Antonio, and its western edge is about 4.5 miles west of San Antonio.

The 1905-1906 California Academy of Sciences expedition to the Galapagos aboard the schooner Academy, stopped at Isla San Geronimo on July 13, 1905. Expedition participants included:

January 25, 1873 [Pacific Rural Press]: “January 11: The Lost Sheep,—When the schooner A. P. Jordan set sail from San Geronimo Island it was compelled to leave behind four sheep that succeeded in escaping from the corral in which they had been confined after their rescue from the wreck of the Sacramento. There is a bare possibility that the poor animals will live, as the island is but sparsely covered with a plant strongly resembling ice plant, upon which it is believed that they will browse. The heavy night dews and ocean fogs peculiar to all the islands along the coast may furnish them with an ample moisture to quench thirst, in the same manner as the numerous flocks on San Clemente Island are supplied, there being not a drop of fresh water known to exist on it.”

May 11, 1876 [SBMP]: “Whaling Along the Coast. San Diego Union. The schooner Horace leaving on the outgoing tide will cruise between the Geronimo Island and the Natividad, Saint Luke, San Quintero, Cedros and other points. Her officers are all experienced men. They will use the latest and most approved gun, with the celebrated "Boyce shot", now employed in whaling fleets. This missile is terror to whales and is considered the most effective means to kill, of any shot yet discovered. The party will also capture seal, otter and make extensive fishing hauls. John Desmond accompanies the party and will explore the islands for shells and marine specimens.”

January 3, 1878 [DAC]: “Six Men Drowned — The Balance of the Crew, in an Open Boat, Trying to Make This Harbor. San Diego, January 2nd. A bottle was picked up yesterday inside the harbor, on the south side of the bay, containing the following, written in an exceedingly plain hand on a leaf evidently torn from a memorandum book: "Off Geronimo Island, December 22nd, 1877. Ship James Harford, from Liverpool, bound for San Francisco. Wrecked on the reef south of Geronimo Island six miles. Six men lost by the upsetting of the starboard-quarter boat, as follows: James Smith, Chas. Hammond, Walter McAuliff, Harry Evans, Mike Long and Joseph Gillespie. Balance of crew trying to make San Francisco in an open boat. Should we never reach port, and this is picked up, please communicate with the British Consul at San Francisco; also, Mrs. Elizabeth Haynes, Liverpool. William E. Haynes, Captain.”

July 31, 1904 [SFC]: “Saves Tewnty From Death. Captain Paulsen of Curacao Rescues Passengers of a Wind-Forsaken Schooner. Six Children on Board. People on Kitty of San Diego Found Dying of Thirst and Picked Up By Steamer. Captain Paulsen of the steamship Curacao, which arrived yesterday from Guaymas, on the outward voyage saved a score of people, six of them children, from a lingering death in a wind-abandoned schooner off the coast of Lower California. Two days before the Curacao reached Ensenada, the schooner Kitty was sighted near Geronimo Island, becalmed and flying signals of distress. One of the Curacao's officers boarded the sailing vessel and found there a distressing state of affairs. On board the Kitty, in addition to the crew, were fifteen passengers, including J. Smith, wife and six children and several Mexican men and women. The Kitty was from San Diego and bound for Lower California. She had been becalmed for eighteen days where the Curacao found her. The food supply was exhausted, the last drop of water had been consumed and death in one of its most dreadful forms seemed inevitable when the white hull of the Curacao loomed up over the horizon. The children had been the greatest sufferers and their pleading for "a drink of water" had added many fold to the pangs of their grown-up shipmates. The fifteen passengers were transferred to the Curacao and tenderly cared for. Two days later, when the steamship reached Ensenada, where the fifteen were landed, most of them had recovered from the effects of their experience on the Kitty. From the steamship's stores Captain Paulsen replenished the larder and water tanks of the Kitty, which was left in charge of the crew to await the belated breeze.”

May 3, 1912 [LAH]: “Weird tales about trees and fish. Topsy-turvy vegetation in Southern Islands and strange colored crabs. Sky lines hidden by game. San Martin and other points of interest invaded by touring party. A strong stimulant to the man affected by the wanderlust is the story told by Sergeant George Willetts upon his return from a cruise along the islands off the west coast of Mexico. Wild game so thick that the sun was obscured, strange creatures of the sea and strange rock formations which showed the hand of nature to be far more weird than the most imaginative creations of man were seen everywhere. In some of his tramps over the islands, he passed a few moments from zones thickly vegetated to very arid ones without a vestige of life of any kind... San Geranimo [sic], another island visited, is about a mile ling and a trifle less than a half mile wide. It was low and sandy and in tramping across it the party was greatly impeded by sinking into the ground to their knees at every step. The cause was learned by digging. Beneath the surface were found innumerable Cassin auklets which had burrowed into the soft ground like gophers and built their nests. Some of the birds were very tame and with a little coaxing and petting willingly posed beside their eggs for photographs...”

October 14, 1920 [Sacramento Union]: “Vessels Speed to Save Passengers of Ill-Fated Ship. San Diego, Oct. 13.—Under orders from Rear Admiral Wiley, the United States mine sweeper Kingfisher sailed this evening from this port to the assistance of the Mexican gunboat Progresso, reported stranded on Sacramento reef, San Geronimo Island, off the Lower California coast, with 200 passengers aboard. Two other vessels are going at top speed tonight to reach the Progresso in time to prevent loss of life. They are the Mexican patrol boat Tecate, carrying Governor Manuel Balaezo of Lower California, whose family is aboard the Progresso, and the fast power schooner Mariam. Shipping men here expressed the fear that the Progresso could not be saved, although they said the chance of saving its passengers was good.”