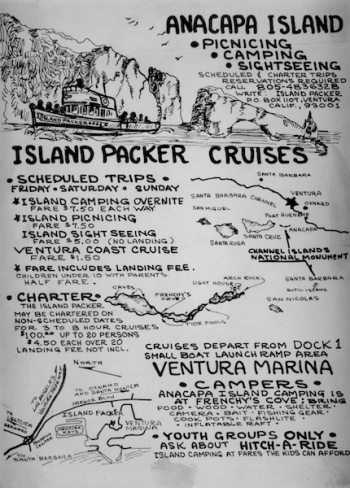 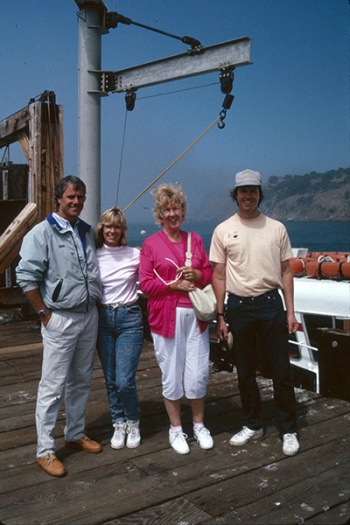 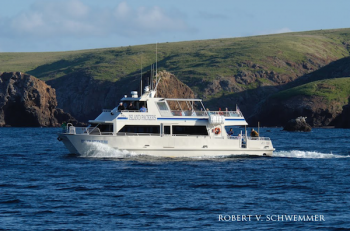 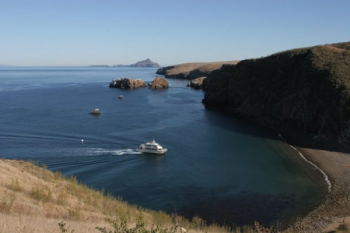 Island Packers was founded in 1968 by Bill and Lil Connally and their four children, Mark, Kirk, Brad and Cherryl. The family began their business by taking tourists and campers to Frenchy's Cove, West Anacapa Island in 1968. At that time, the island was a National Monument, and monument superintendent, Donald Robinson, issued Island Packers a permit to operate their business. In 1980 they became the official concessionaire to Channel Islands National Park: San Miguel, Santa Rosa, Santa Cruz, Anacapa and Santa Barbara islands.

December 29, 1969 [San Bernardino County Sun]: “Anacapa Isles Offer New View. The Channel Islands, extending over a range of about 150 miles off the Southern California coast, with such colorful Spanish names as Santa Catalina, San Miguel and San Clemente, offers new adventure to the visitor. None except Santa Catalina has been developed. The most rugged of these Channel Islands is Anacapa Island. This small chain of islands, about five miles long, consists of three islands, with numerous caves. There are no accommodations here, but primitive camping is permitted at Frenchy's Cove. Anacapa's lave islands abound in marine mammals: seal elephants, the fur seal and the California sea lion. On rare occasions, a sea otter might be sighted. There are also many sea birds, mostly gulls and pelicans. Unique plants such as the giant tree-like sunflower grow on Anacapa Islands. The only way to the Anacapa Islands is by private boats, such as the Island Packer, out at Oxnard or Ventura. This boat takes trips to these islands for those who like to picnic, skin dive, camp or just plain sightsee. The ride out is exciting as flying fish sail by or a whale might leap out of the water. Ashore you will see the undersea gardens with sea urchins, star fish and Garabaldi fish. Or maybe you might like to explore the sea caves and be greeted by the loud barking of hundreds of sea lions. ” 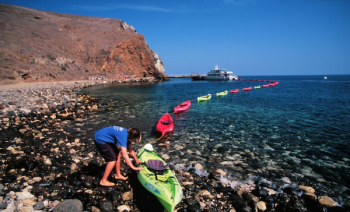 Over a million people have traveled aboard an Island Packers vessel since the company was founded in 1968.

March 5, 2020 [CoastalView]: “Crossing the channel for 51 years: Island Packers provides access to “Galapagos of the North Pacific.” Since 1968, Island Packers have been the bridge between the mainland and Channel Islands National Park, connecting visitors to one of the most unique and biodiverse parks in North America. Anacapa Island was still a National Monument in 1966, when Bill Connally found a way to get himself and his four kids, Mark, Brad, Kirk and Cherryl, to the craggy, windswept isle. It was their first camping trip to the islands. Unbeknownst to the kids as they adventured around the island, Bill had already hatched a plan to launch Island Packers. Along with wife Lil, the family opened operations on Mother’s Day in 1968. Since that maiden voyage out of Ventura Harbor, transporting a full boat of passengers on that first crusty boat to Anacapa Island, Island Packers has taken well over a million visitors to the chain of islands steeped in natural wonders. Today, the Connally family has four boats in their fleet that transport campers, day-trippers, kayakers, snorkelers, divers, bird watchers and photographers to the five isles in the National Park: Anacapa, Santa Cruz, Santa Rosa, San Miguel and Santa Barbara Islands. “We were just having a lot of fun getting to go to the islands,” said owner, Cherryl Connally, recalling those early days of operations. “Exploring was all that Mark, Kirk, Brad and I focused on in the beginning. It was a new world to us.” Bill Connally passed away on Nov. 22, 1987, but his family has carried on, building their business to include whale watching and other non-landing natural history trips. As the years have rolled by, it’s the gratification written on people’s faces that has made it all worth the struggles to persevere. Just imagine the reaction of someone who has never been on the ocean before when for the first time, they witness thousands of playful common dolphins swimming alongside the boat or an animated whale breaching just off the bow. “We find it very gratifying to see visitors having fun and enjoying the Channel Islands, the marine life they encounter and the boat ride itself,” continued Connally. “There’s also the joy in recognizing that our father succeeded in his idea.” Weather on the Santa Barbara Channel and surrounding the Channel Islands can be ever-changing. Certainly, one of the biggest challenges facing a company that prides itself on safely transporting eager visitors to the remote National Park, is pouring over all the weather reports to glean the best conditions for transport. There are more available reports than ever, but even so it can still be a crapshoot venturing 20-plus miles or so off the coast. “Management and crew work together daily to evaluate conditions and make the best choices possible for the safety and comfort of our passengers,” said Connally. “To a large extent, the weather also dictates how busy or slow we are going to be on any given day, particularly during the winter season. It can be very challenging to predict demand and schedule boats several months in advance when weather conditions have such an impact on the volume of reservations on any given day.” Island Packers’ most recent challenge arrived Nov. 1, 2019. In constructing a new pier at Scorpion Anchorage—the main hub of the park on the southeast end of Santa Cruz Island—the National Park Service forced a closure on that part of the island until further notice, possibly through summer. The temporary closure of Scorpion Anchorage has forced Island Packers to think outside the box, developing new trips to enhance the visitor’s experience while uncertainty surrounds the new pier. Increased visitation has already commenced at Prisoners Harbor six miles west of Scorpion. There are also trips that shuttle to Painted Cave, one of the largest sea caves in the world. Afterwards, visitors can spend time at Prisoners. Another trip gaining in popularity is a trip to Prisoners that also shuttles southeast to Anacapa Island for the remainder of the day. Island Packers has also transported visitors to Santa Rosa Island throughout the winter, a first for the company. “We want to keep our employees working and provide trips for the visitor as much as we can to the islands,” said Connally. “That is what we do, and we are responsible to abide by the park contract as the concessionaire. We have survived for 51 years and I’m hoping we can get through this challenge. We just need to be positive and know that when the pier is done, it will be great. Being the park concessioner for the transportation to the islands, we have learned to manage and work with changes. At least we have some places to go. The park service is doing the best they can. They are also working on building a small dock for Santa Barbara Island in hope we can run some trips there in the spring and summer months.”