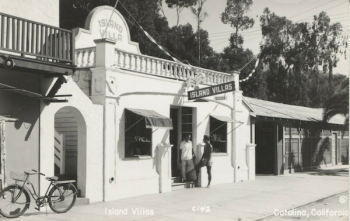 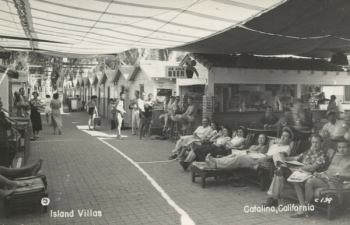 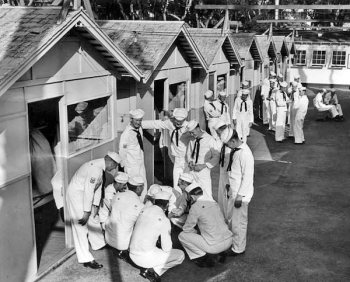 Island Villa, Santa Catalina Island was expanded to1200 villas in 1924, called Island Villa and Park. Island Villa, Office, Sumner Avenue is listed in the 1924 Avalon Telephone Directory. Up until 1944, the island villas were cozy cabins. During the war years, Island Villa cabins were used for Maritime Service trainees during their service training period.

June 12, 1895 [LAT/SCat]: “Avalon. A lumber schooner arrived yesterday morning laden with lumber for the new hotel, Island Villa, and a gang of workmen are pushing the reconstruction of the building at a rapid rate. It will be ready for occupancy July 1.”

May 7, 1904 [LAT/SCat]: “Avalon. The Island Villa was opened with a hurrah yesterday, the first day bringing a bunch of excursionists numbering fifty-six, with another party of ten.”

August 5, 1904 [LAT/SCat]: “Avalon. The bowling alleys which were put into the old Island Villa dining room when that hostelry was removed to its present site, have been taken out and are being removed to the Isthmus.”

September 11, 1917 [TI/Avalon]: “After one of the most successful seasons in its history, the Island Villa, which has been under the management of George Daul, will close its doors tonight.”