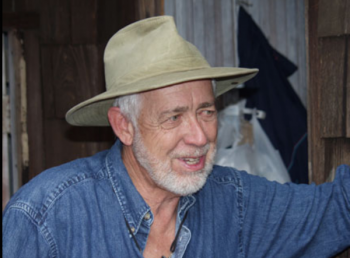 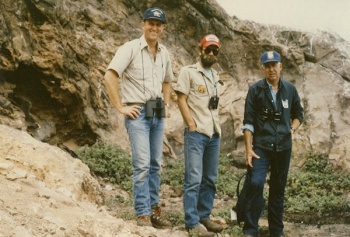 JEHL, Joseph R., Jr. (1935- ) was born on Manhattan Island on December 12, 1935, and grew up in Clifton, New Jersey, then a truck-farming/manufacturing city 16 miles west of New York City. His father, a physician, encouraged his early interest in natural history, which developed in his teen years under the influence of a high school biology teacher, who introduced him to birding, and a truck driver, who honed his skills and introduced him to the state’s beaches, ridges, back roads, and garbage dumps (that’s where the gulls were). These interests distracted him from most of what was being taught in high school, although in an aptitude test he correctly identified the photos of 75 bird species and nearly as many mammals. The counselor said he might make it as a museum curator.

He attended Cornell University, with the idea of majoring in zoology and probably going to medical school. However, he found no stimulation in zoology, which was taught as a foreign language, with a major emphasis on remembering the names of parts of cells seen through a microscope, or the appendages of a crayfish, but little on the big picture of how animals work or evolution. To fill in a requirement, he took a course in geology and changed his major. Geology provided some of the framework he sought, as well as an appreciation of time, faunal changes, and impermanence. However, he was naive. At a seminar in 1956 he asked why we were not discussing Wegener’s ideas of continental drift. His query was greeted with derision, as the faculty had declared it impossible.

But, for him, geology was also a blind alley. The only jobs available were working for oil companies, identifying bits of index fossil foraminifera drilled up from wells. Full circle: looking at tiny animals through microscopes was what drove him out of zoology, so he enrolled at New York University and took a few courses that seemed interesting. Comparative anatomy was the clincher, for it finally provided a key to evolution you could understand. Curiously, at the same time, Tuzo Wilson was showing that continental drift (afterward known as plate tectonics) was real. This concept was as important to geology as natural selection was to biology, because it provided glue for integrating lots of facts that the geology professors had left unconnected. Only then did it become possible to understand why commercially important minerals were found in some areas and not others, or to consider the distribution of fossils (or even modern birds) in relation to the position of past continents . With this insight, Joe was ready to move on. Uncle Sam agreed and awarded him two years, 3 months, and 4 days at Fort Detrick, Maryland. This allowed him time to learn about strange phases of biology (that we don’t talk about), as well as to read. More good luck; he met Jeanne Duncan, a student at Hood College. Married for 43 years, they have three children, all above average.

After military service, Joe enrolled at the University of Michigan, and in 1964 began studies of subarctic birds. These studies, which are still continuing, resulted in two books on the avifauna of Churchill, Manitoba (1970, 2004). He received his PhD degree in 1967 for a thesis on the systematic relationships among the shorebirds. He also made a genius of his counselor by becoming curator of Birds and Mammals at the San Diego Natural History Museum. In 1977, he joined the fledgling Hubbs Sea World Research Institute, a non-profit organization in San Diego sponsored by the Sea World Parks and named in honor of the great ichthyologist Carl L. Hubbs, who became a great friend and supporter. His major research interests were in seabirds and shorebirds, and he conducted studies in many areas of the Western Hemisphere, from the subarctic to Antarctica. Starting in 1980, he began a major program of studying the avifauna of saline lakes in the western United States, with emphasis on environmental issues concerning Mono Lake, California, and Great Salt Lake, Utah. Except for a year in Washington, D.C., from 1987 to1988 as chief scientist at the President’s Council on Environmental Quality, he remained at Hubbs as Senior Research Biologist and Director of Research until 2001, when he and his wife semi-retired to Annapolis. He was honored to be named a research associate in the Division of Birds at the U.S. National Museum of Natural History, where he continues to conduct research in Canada and Mono Lake, as well as consult with various organizations.

Joe was elected to the Washington Biologists’ Field Club in 2004.