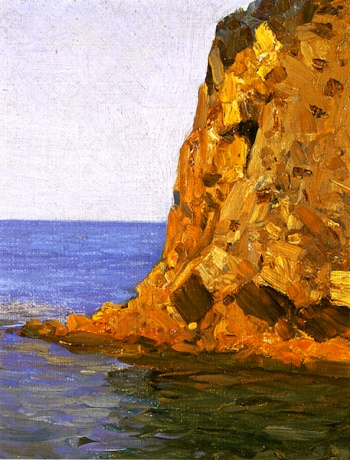 Johnson, Frank Tenney (1874-1939) was born in Pottawattamie County, near Oakland, Iowa, on June 26, 1874 on a small family farm situated on the old Overland Trail, not far from Council Bluffs. In December 1886, Johnson's mother died. The family could not cope with the stress of maintaining the farm, so they moved to Milwaukee in 1888.

In 1893, Johnson enrolled in the Milwaukee School of Art and took lessons from Richard Lorenz (1858-1915), the celebrated painter of Western subjects who had once been a Texas Ranger. That year, Johnson went on the first of many sketching trips to the Indian country of South Dakota. In 1894, he enrolled in the Art Students League of Milwaukee. A year later, with the aim of getting the best professional instruction, he went to New York, where he studied with John Henry Twachtman (1853-1902) at the Art Students League. In 1896, he returned to Milwaukee and married Vinnie Reeve Francis.

Johnson and his wife lived in Milwaukee for the next few years, saving money while he produced illustrations for various magazines and books. In September 1902, they moved to New York, where Johnson was accepted at the prestigious New York School of Art, taking classes with two of the great icons of American art, Robert Henri (1865-1929) and William Merritt Chase (1849-1916).

In 1904, Field and Stream magazine agreed to sponsor Johnson on an extended painting trip to Colorado and New Mexico. To get firsthand exposure to cowboy life, Johnson joined the Lazy 7 ranch in Hayden, Colorado. Afterward, Johnson went to New Mexico and traveled extensively, painting in such quaint places as Santa Cruz, Española, the pueblos of Santa Clara and San Juan, and Isleta. He admired the deep beauty of the land and developed a great respect for the Indians who had lived there for so many centuries.

In New Mexico, the overpowering heat of the desert day made normal daily activities impractical. Community life was postponed until the cool of the evening. The sight of Navajos going about their business by the light of the moon and stars was a revelation to Johnson. He began to develop a unique technique of moonlight painting that was to become his "trademark".

During the next few years, Johnson became well known as an illustrator, especially for books by Zane Grey. He also worked for such magazine luminaries as Metropolitan, Sunday Magazine, Harper's Recreation Magazine, Cosmopolitan, Harper's Monthly, and Harper's Weekly. Although he earned a successful living as an illustrator, he longed to retire to full-time easel painting.

In 1912, Johnson sent a small painting of Santa Catalina Island to the annual Thumb Box Exhibition at the Salmagundi Club, one of the oldest, most important art clubs in New York City. His regular participation in diverse New York art exhibitions gave him a much sought-after standing among his artistic peers.

At the 1919 Salmagundi Club Exhibition in New York, Johnson met artist Clyde Forsythe (1885-1962), who was to become a lifelong friend. Forsythe lived in California and, over time, suggested to Johnson that he should move there, too. In 1922, Johnson and his wife went to Los Angeles, where he exhibited several of his works at the Stendahl Galleries in the Ambassador Hotel. While in Los Angeles, he joined the California Art Club and showed in its 1922 exhibition. The move to Los Angeles was a disappointment, as Johnson failed to sell any of his paintings. He and Vinnie returned to New York, where he continued his career as an illustrator.

Johnson's fortunes made a turn for the better in 1923. He had already received some recognition for his night scenes, but his reputation was firmly established when one of his moonlight paintings, THE WANDERER, won the coveted Samuel T. Shaw Purchase Prize at the Salmagundi Exhibition of 1923. At the same time, his paintings began to sell well at Stendahl's, so the Johnsons decided to move back to Los Angeles. After finally achieving success as an easel painter, he retired from illustration.

In 1925, Johnson and his assistants painted three monumental paintings as part of the decor for the newly opened Carthay Circle Theater in Los Angeles. They included: THE DONNER PARTY, for the massive 30 by 40 foot center curtain, and two side panels, THE INDIANS and THE MINERS, each measuring 18 by 11 feet. The completion of these huge works made Johnson a celebrity and greatly increased the demand for his paintings. Unfortunately, this venerable theater was demolished in 1969 to make way for an office building. The paintings were taken down and put into storage for many years, where they suffered greatly from poor handling.

In 1926, the Johnsons moved into their new house and studio at 22 Champion Place in Alhambra, a small community just east of Los Angeles. His neighbors on "Artist's Alley," as Champion Place was called, included Norman Rockwell (1894-1978) and Jack Wilkinson Smith (1873-1949).

Ironically, death came to Frank Tenney Johnson as a result of a kiss given in friendly greeting. At a gathering on the evening of December 19, 1938, Johnson greeted an old friend, Mrs. Callahan, with a kiss. A few days later, Mrs. Callahan died from advanced spinal meningitis. Unwittingly, Johnson had contracted the disease from the kiss. He fell ill with fever a few days later. He died of spinal meningitis early in the morning on January 1, 1939, at his home in Alhambra. He was 64 years old.