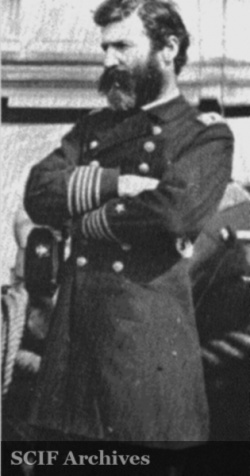 JOHNSON, Philip Carrigan (1828-1887), born in Maine, he was an employee of the United States Coast Survey on the west coast in the 1850s. Johnson reported for duty on July 20, 1854 as Midshipman aboard the steamer Active under the command of James Alden. Survey employment was cut back prior to the Civil War starting in 1858, and Johnson was relieved of his post in 1859. He was one of the first naval officers reassigned to the Coast Survey and served from 1871-1875 as commanding officer of the steamer Hassler, which came to the west coast via the Straits of Magellan in 1872. He ultimately retired as a Commodore from the navy and became a Rear Admiral in 1887, only a few days before he died on January 28, 1887 in Portsmouth, New Hampshire. Johnson is buried in Arlington National Cemetery.

November 16, 1871 [DAC]: “The steamer Hassler, built at Kaighn’s Point, by Messrs. Dialogue & Wood, started for Boston yesterday, and early in the morning His Honor, Mayor Fox, and Col. J. W. Forney, Collector of the Port, paid a visit to the officers on board. The Hassler is 165 feet long, 25 feet beam, and 10 feet hold. She contains compound engines, with double cylinders, the largest being 28 by 28, and the smaller, 16 by 28 inches, one of which carries from 70 to 80 pounds of steam. This is the same variety of machinery employed on the White Star Line. The Hassler has a reeling engine for hauling in the deep-sea line, and many other modern appliances for the facilitating of the scientific experiments of Professor Agassiz and others who will accompany the expedition on a voyage of exploration. The analytical chemist is Dr. White, of this city. The crew and passengers number about fifty persons. The officers are as follows: Commander P. C. Johnson; Lieutenant Commander, C. W. Kennedy…”

October 25, 1873 [SBSWT]: “The Hassler. Yesterday morning the United States Coast Survey steamer Hassler, Captain Johnson, came to anchor off our town. The object of the Hassler’s visit to our coast, we understand, is to run lines of a sounding across our channel, between the mainland and the islands, and particularly to execute the hydrography survey of a harbor near San Pedro. The Hassler, we are pleased to learn, will be working in our channel during the winter. We welcome her officers to our society.”

April 18, 1874 [SBSWT]: “The U.S. Coast Survey steamer Hassler, Captain Johnson, came into port Friday night. She will continue the work of hydrographic survey in the Santa Barbara channel and around the adjacent islands.”

April 23, 1874 [SBDP]: “On Thursday last, Alexander More, Esq., while riding in one of the remotest parts of Santa Rosa Island, a dozen miles from assistance, was thrown quite heavily from his horse, his leg broken just below the knee, and his knee disjointed. Fortunately a rope was attached to the horse, and this was caught during the fall. Remounted as best he could, in his disabled condition, he rode at full speed the fifteen miles to camp, fainting all the way with pain. On arriving, he was more than fortunate in finding the Hassler in the little harbor. Captain Johnson very promptly and humanely sent the ship’s surgeon to his assistance. The doctor set the limb, bound up the wound and showed himself to be a most obliging and most skillful surgeon. Everything was done for the injured man that the surroundings would permit, and he is now doing exceedingly well, and it will not be long before he is on the street again, blessing his lucky star for his fortunate escape. Especial praise is due the captain and the surgeon for the humanity and consideration displayed.”

April 24, 1874 [SBSWT]: “The U.S. Coast Survey steamer Hassler, Commander P. C. Johnson, has been taking soundings between Santa Cruz and Santa Rosa islands during the past week. Last evening she returned to her anchorage in our harbor.”

September 16, 1874 [S. Forney to Superintendent Patterson]: “On the south side of the northwest point of the island is a small cove open to the south. It is well protected from the northwest winds. Large vessels can anchor close under the point of rocks on the west side of the cove in 9 fathoms of sandy bottom. This anchorage has no name but was called by Commander P. C. Johnson, Forney's Cove.”

October 13, 1879 [SBDP]: “Captain P. C. Johnson, formerly of the Hassler, and now stationed at Mare Island, is in the city on a visit to recuperate from the effects of San Francisco fogs and winds.”